Russell and the cast of "The Christmas Chronicles 2" celebrated Hawn's birthday two days ahead of her 75th birthday. 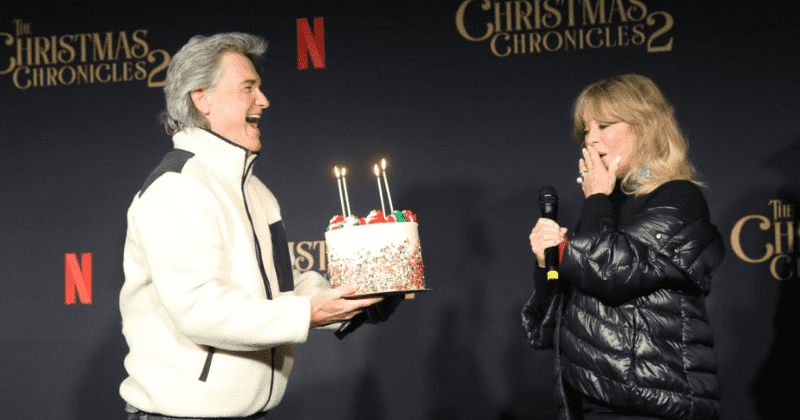 Goldie Hawn turned 75 on Saturday (November 21) but that didn't stop her partner Kurt Russell and the cast of their upcoming Netflix movie from giving her a memorable birthday surprise well in advance. As the Hollywood power couple clad in jackets arrived on Thursday for the premiere of The Christmas Chronicles: Part II at The Grove mall in Los Angeles, a montage of their co-stars wished Hawn a Happy birthday via pre-recorded videos. The couple shared a sweet moment on stage as child actors Darby Camp, Julian Dennison, and Jahzir Bruno offered their wishes which Hawn shared on her Instagram Stories, reports PEOPLE.

Also in on the surprise were Kimberly Williams-Paisley, Tyrese Gibson, film director Chris Columbus, who called Hawn "the best Mrs. Claus in cinema history." Columbus said: "We're so privileged to have you in our world. An incredibly gifted comedic actress, a great dramatic actress," while Gibson offered a slow recitation of "Happy Birthday" which drew in plenty of applause from those attending the event. Hawn also captured her partner of 37 years receiving a birthday cake for her and put them up on Instagram Stories for her fans to see. She even added another picture of Russell and captioned it, "My Santa."

The duo plays the role of Santa Claus and Mrs. Santa Claus in the second installment of the 2018 movie released on Netflix. The Christmas Chronicles: Part 2 continues on from the first movie and features Kate Pierce, now a cynical teenager, reuniting with Claus as a troublemaker chimes in to cancel Christmas forever. This is only the second time the pair have appeared in a movie together with the first one being the prequel for their upcoming film. Russell and Hawn started their 37-year long courtship when they met while auditioning for Swing Shift in 1984 when both were divorced from their respective partners and weren't looking for a relationship. Recalling the time to CBS News, Russell said he almost "put his worst foot forward" and ruined the relationship before it even began.

"When I met Goldie, I was at a time in my life and a period of my life where I was very definitely gonna put my worst foot forward." Hawn interjected and was surprised by the statement because she said she had a great memory of their first meeting. "You put your worst foot forward? I could hardly say that," Hawn said. "I would say if you'd done that with me I wouldn't be with you today," Russell explained himself and said he was horribly hungover when they first met but Hawn revealed it was fun. She then burst into laughter when Russell said: "This is like a group therapy session!" The pair have constantly been supportive of each other but have never influenced each other or the career paths they have chosen. When quizzed on whether they ever discussed the roles they received, Hawn said, "Very rarely," and went on to praise her partner's decisions. "He's never made a mistake in terms of what he's decided to do, ever. But he's never been bad. Ever." He jokingly agreed as he burst out laughing "I agree with you!" Russell laughed.

Being in one of the longest-surviving relationships comes with a lot of attention and when asked what the secret to their relationship was, the pair didn't offer a conclusive answer. "There's no secret. There are two things, for me, anyway. And it's that you both wanna be together. I mean, you've gotta want to be together." Russell agreed with Hawn, adding, "At the end of the day, how do you explain it? I don't know! I guess it's as simple as saying, for me, it's the same thing as what you're saying. I call that love." At the end of the day, all relationships go through their phases, said Hawn. "Relationships go through periods, sometimes really hard times. But there's nothing sweeter than having a family, and that is worth everything."