The Giraffe Manor is the first of its kind besides the one available in Nairobi, Kenya, and allows people to dine in with animals. 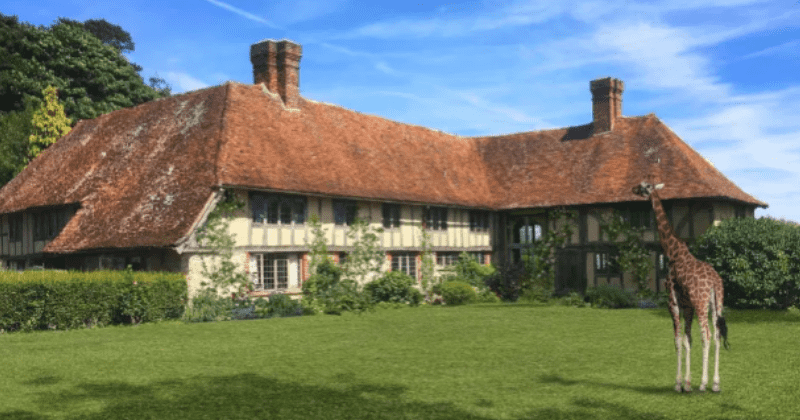 You may have seen pictures and videos of the Giraffe Hotel in Nairobi where you will be greeted by a bunch of giraffes while you dine in. Soon, Kenya will not be the only place that will offer this unique experience. According to The Sun, a luxury hotel in Kent is going to offer you the chance to have breakfast with the majestic, towering animals. Port Lympne Hotel and Reserve is the boutique accommodation that has come with exquisite offer after it received approvals for the long-awaited Giraffe Hall, with plans for an official opening set for next summer.

The safari experience a little closer to home 🙌😍🦒https://t.co/znoPhnuYC9

The hotel is a 15th-century building converted into a luxe hotel and will have 10 en-suite bedrooms as well as five camping pods seasonally, which means it can hold a told of 40 guests at any given time. The key selling point of the hotel is that it is located within the reserve, and animals can walk in through the doors and windows during mealtime. What's even more interesting is that this will be the first-ever experience of its kind available in the western hemisphere, besides the Giraffe Hotel in Nairobi. Speaking of the unique offering, on the official website, the hotel wrote: "Get closer than ever before and make friends with your giraffe neighbors, as the resident herd peer into the lofty ceilinged drawing-room, or amble up to the bedroom windows, where you may be lucky enough to feed them."

New Giraffe Hall where you can dine with the animals to open in Kent – but there is already a waiting list of 9,000 https://t.co/ehCjrNhVcU

As to the restaurant, the house will convert an already on-site restaurant, The Lapa, which will be extended to include an outdoor deck that offers breakfast, lunch, and dinner. Other features of the accommodation also include 30-mile views of the Reserve's savannah where animals can be seen roaming freely. However, there's a complication if you are planning to visit, as the place already has a waiting list of over 9,000 on it, so it might take a while to even be able to book a spot at the time of opening. The cost of the experience has not yet been revealed and is likely to be sent out when it officially opens to the public.

A unique hotel where guests will be able to come face-to-face with giraffes is coming to the UK.

Giraffe Hall, at Port Lympne Hotel and Reserve in Kent, is yet to open its doors, but has 9,000 people signing up to the waiting list, https://t.co/IMeKNUKreT @magicalkenya

The reserve already has several animal experiences available for patrons such as the highly popular Lion Lodge, which is built in a loft-style building and comes with an open fire and wood-heated Scandinavian outdoor baths on secluded platforms. The king-size master suites offer a view of any and all of the five lions here —Adras, Oudrika, and their three cubs—as a spiral staircase leads up to a mezzanine level with two single beds. Kids can also be accommodated here on the two single beds planned specifically for kids. Besides this, the facility also has a bar, six-foot chandelier, and a private terrace. An overnight stay at the flagship room starts at £1,750 and includes breakfast, welcome fizz, a free safari, and reserve tickets with plenty of other cheaper alternatives available.

NEWS: Plans for Giraffe Hall at @portlympnepark near #Hythe have been given the go-ahead - with 9,000 people already on the waiting list to stay there! 🦒 #kmfmnews https://t.co/l1bP6PDg97 pic.twitter.com/xRFvYqpKuO

Meanwhile, the Tiger Lodge, which offers a similar experience costs £1,000 a night, the Wolf Lodge costs £549, and the Bear Lodge costs £350. The Estate, which was previously owned by MP Philip Sassoon, played host to historic personalities such as Lawrence of Arabia, Winston Churchill, and Charlie Chaplin. The news of the Port Lympne Estate comes weeks after the Chester Zoo also announced similar details of a new plan to expand its facility to include hotel rooms and would allow guests to experience wildlife as they wake up with giraffes serving as one of the main attractions. However, the project named Grasslands is only expected to launch in 2022, a year after the Kent facility's inauguration.