Kai Shappley sat in front of a Texas committee and schooled the lawmakers for being insensitive over transgender kids like her. 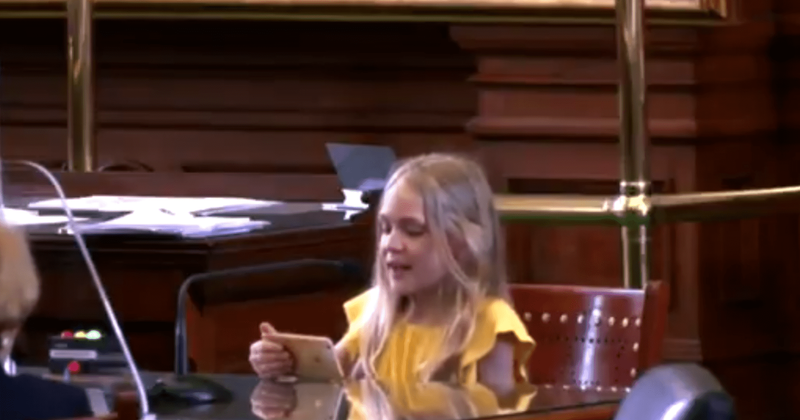 A 10-year-old trans girl shamed GOP senators from Texas for trying to brand her mother as a 'child abuser' for supporting her daughter. Kai Shappley, a fourth-grader, sat in front of the Texas Senate State Affairs Committee on Monday and schooled lawmakers on how they can be better adults. She was talking against a proposed bill that would make it illegal for parents to sign off on gender-affirming surgeries for their kids. In a moving testimony, Shappley said: "I do not like spending my free time asking adults to make good choices. Texas legislators have been attacking me since Pre-K. I am in fourth grade now", reports LGBTQ Nation.

Watch the amazing @KaiShappley a huge fan of @DollyParton, 4th grader and a transgender girl, school the Texas Senate and especially @SenBryanHughes once again on how bad their anti-trans bills will be for #TransYouth if passed. Of course those #txlege will ignore her plea! pic.twitter.com/ypbD1Nvm51

Shappley was also responding to state Senator Charles Perry, one of the authors of the law after he tried to shield his bigotry behind religious beliefs. "God created us all in his own image," he told, addressing the committee. "We went outside that creation by our own accord and suffer from some of the consequences of being outside his will since the garden. This is another one of those issues that we find ourselves entangled in that unfortunately, the damage is to our most precious, precious being our children, not our personal lineage, but all of God’s children and the children in this state." As a rebuke to Perry's statement, Shappley responded: "God made me. God loves me for who I am, and God does not make mistakes."

NEW: In a short documentary we're releasing with @them, seven year old Kai Shappley navigates growing up as a trans child in Texas, where she's been banned from the girls' bathroom.

Ending her brief testimony, the 10-year-old seemingly issued a jab to the lawmakers while appreciating the efforts of those supporting her cause. "I want to say thank you to those of you who are sticking up for kids like me. By the time I’m in college, you will be celebrated in the history books." Though Shappley has had to fight the blowback from conservative sections of society, she has been able to lean on her mother Kimberly Shappley for support. In a 2017 interview with Good Housekeeping, Kimberly, a Christian mother, said she was living with a transgender daughter who "was verbalizing that she was a girl at least six times a day" since she was three years old.

With all the antiTrans kid legislation across the nation today it’s a good time to share our doc again. It’s only 18 minutes long & It WON AN EMMY! Ok. Can we agree on how cute I was 🥰 https://t.co/uPPgAZf2df

Accepting her daughter, however, didn't come easy as she had to struggle to find her way to finally be there for her daughter. "I used to lead a small ministry teaching Bible study, and I didn’t support or condone those living the LGBTQ lifestyle,” Kimberly said. That's when she joined a group of Christian mothers of LGBTQ+ children and learned of a transgender teen who died of suicide "because her parents wouldn’t let her be who God designed her to be." That changed her outlook to a great extent. Then when Shappley was four, Kimberly embraced her daughter's true self and "stopped punishing Kai for 'acting girly'." When Shappley was four, the mother let her child transition even though she had internal battles with herself.

"There was still fear and confusion. I was defying the societal and cultural expectations of our community, family, and friends." But, over half a decade on from then, she feels vindicated for ditching conventions and taking her daughter's side. "There’s never been a moment of doubt or regret after making the choice to let Kai transition," she said. "I’ve learned too much about identity and faith in loving my beautiful daughter exactly the way she is. She's a loud, happy and joyful girl who expects that everybody's going to be kind and good. It's her persistent spirit that has enabled her to transition so young. She knows who she is and has no problem making sure that everyone else knows too."

She's brilliant, beautiful, articulate & understands far more than Texas legislators. @KaiShappley can educate those #GQP in our nation's Congress. What are these people so afraid of? Sexuality isn't contagious. They should be more concerned with adults who prey on children❤🏳️‍⚧️🏳️‍🌈

As things stand, the bill, which is still receiving a lot of pushback, could come into effect as early as September if it gets enough votes in the state senate.