The couple managed to get hold of their youngest child before getting out of the house but all four kids passed away. 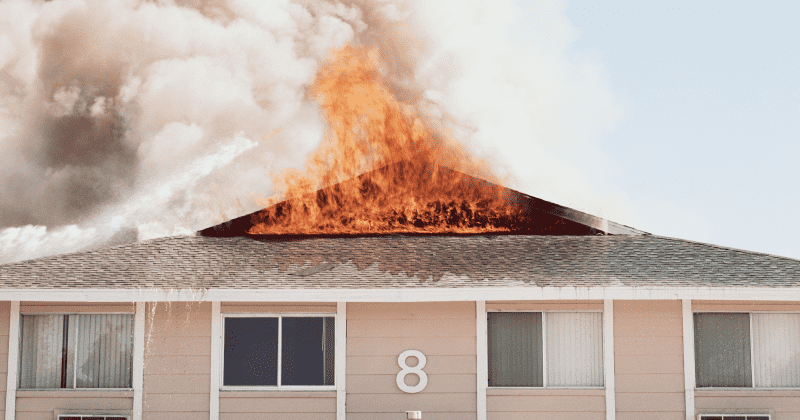 Four children aged three, four, six and eight, died in a house fire after their parents fell asleep while smoking in bed, an inquest found. The incident happened at a family home in Stafford, Staffordshire, in February last year killing four kids — Riley John Holt, 8, Keegan Jonathan Unitt, 6, Tilly Rose Unitt, 4, and Olly Unitt, 3. Natalie Unitt, 26, and her partner Chris Moulton, 30, were held by police on suspicion of manslaughter by gross negligence. South Staffordshire Coroner Andrew Haigh told the authorities that a glass ashtray was found melted into the springs of a mattress following the house fire, reported the Daily Mail. The four children had died from "fumes from fire caused by [an] unextinguished cigarette" on the bed in the parent's bedroom, found an inquest. The court also heard that the couple had been warned about smoking indoors by social workers.

Unitt told the court that she suffered from post-traumatic stress disorder and couldn't recall what she did after she learned the house had caught on fire. Moulton, the father of three children, disagreed with the findings and claimed the fire started on a landing. The house fire was "caused by carelessness with cigarettes" in the bedroom, concluded Fire investigator Leigh Richards. Both Unitt and Moulton dispute the claims the fire started in the bedroom but the coroner said the evidence doesn't back up their claims. "It's understandable they tried to play down the significance of this bearing in mind what has happened. Mr. Moulton suggested that the fire may have been caused where the boiler is on the landing on the property. I do not accept that. I have heard the expert evidence and Mr. Richards has clearly indicated why the boiler is not the cause of this fire," said the coroner Haigh.

Haigh added that the couple was warned about smoking indoors. "Ms. Unitt had been advised not to smoke in the property but there is substantial evidence of them continuing to do so," he said. After realizing their property was on fire, Unitt and Moulton managed to escape. Moulton managed to get hold of their youngest child, then aged 2, before jumping out from the first-floor window. Unitt escaped through the front door. Moulton suffered substantial burns and needed a skin graft.

"He has properly explained his reasons for his decision as to the cause of the fire. That was that the fire started as a result of a cigarette on the bedding in the main bedroom. Of significant note ... within the recess of the left-hand (window) casement when looking from inside the lounge, there was a single discarded cigarette butt," said Haigh. "That had not been stubbed out in my opinion and had been left to burn on its own. There was evidence within the lounge of a number of cigarettes that littered the carpet against the skirting boards."

"The fire in my opinion developed within the bedroom. As the fire developed, the room went into full flashover, where everything within the room becomes involved in the fire," said Lee Richards a fire officer with West Midlands Fire and Rescue Service. "Having the windows open aided ventilation to the fire and allowed the fire to grow greatly and spread outside the compartment." Richards added that he had found a "significant number of carelessly discarded cigarettes" inside and outside the house. Fire crews said there were "in excess of 100 cigarettes" found outside a door to the garden and "discarded butts below the lounge window, bedroom window and within the undergrowth of the garden."

Detective Inspector Alan Lyford, of Staffordshire Police, said the fire had started in the bedroom before adding that Moulton had moved the burning duvet to the landing in the hope of extinguishing it. "Having worked with Mr. Richards, I concur with him in that we believe the fire started within the bedroom. The hypothesis is that a duvet was moved outside the room which then further set alight, causing Christopher not to be able to leave by the stairs and get access to his children. It stopped Natalie getting back upstairs and that's why she had to leave via downstairs," said Lyford.