The two men sat close to each other and enjoyed what looked like an unexpected picnic sharing a Chick-fil-A on the sidewalk. 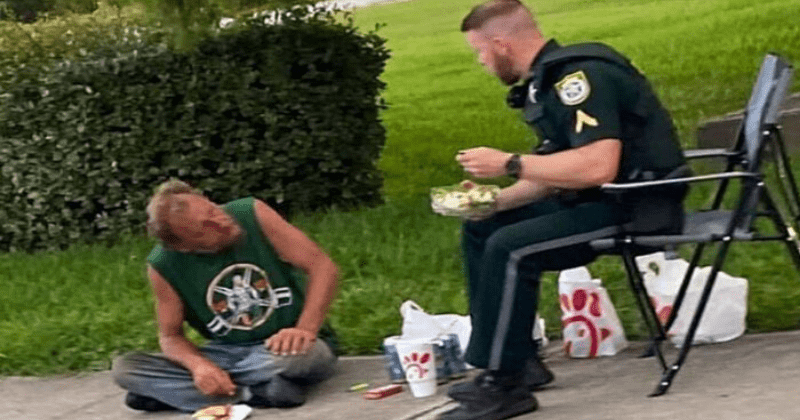 It takes a tiny little act of compassion to make someone's day or even a week. Even a small gesture such as sharing a meal with a homeless person and having a normal conversation for once can make all the difference in the world, especially when times are so tough. And that's what this Sheriff's deputy has done. Brownie Lyons and her husband were driving around Lake City on July 2, when they saw Corporal Shane Foote of the Columbia County Sheriff's Office step out of his patrol vehicle, pull out a chair, and sit down for a meal, reports WCJB. Speaking to the network, Lyons recalled the incident and said: "We were wondering if he was going to talk to the guy about being on the street..." However, to their surprise, there was something completely different waiting to happen. The two men then sat close to each other and enjoyed what looked like an unexpected picnic sharing a Chick-fil-A on the sidewalk. "...but when we pulled out, he had set up the food and was sitting down with him eating," Lyons said. The photo that the woman clicked has gone viral of sorts online, receiving over 4.4k likes and over a thousand comments.

The photographer then said she was inspired to share the “feel-good moment” with her friends, family, and the world because good deeds often go unrecognized. Continuing about the incident, she said: "I do not know the officer, and personally it doesn’t matter if he’s in law enforcement or not. I wanted to show that there are people who do good things and not always for recognition." Such simple acts of compassion have gone amiss in the times of the pandemic and the protests against police brutality in the United States.

The tale has a twist too after Lyons' son recognized that he had attended school with the deputy, who then confirmed that the kind deed was "Shane all day everyday!" Lyons also revealed that people on Facebook who personally know the officer went on to comment about what a "great guy" he is. "I think our community in Lake City has a lot of good officers including Florida Highway Patrol, and I have personally witnessed this but unable to capture it until that day," he said. "So many times officers, paramedics, EMTs, and nurses like myself do a lot of good things according to our hearts to serve not for anything else,” Lyons continued. “It takes very little effort to show kindness… A kind word or gesture goes a long way."

Meanwhile, the photo, which has garnered over hundreds of comments also has people appreciating the gesture. Brent Parker wrote: "Outstanding Brownie Lyons!!! This is what people need to see instead of the filth that passes as “news." Tiffany Veltman wrote: "How can I find out who the homeless man is?? He looks like my father I've been looking for he's been homeless for years." Lisa Dame wrote: "Wish there was a channel you could turn to that only shows the goodness in the American people, it's out there, like these 2 men having, lunch you just have to look for it." John Sedarat wrote: "Compassionate policing. What a concept. This...is part what good policing looks like," before going on to write a brief commentary on the state of the police in the United States and their constant use of "Us vs. Them" mentality before urging for accountability.

Our heroes never disappoint us!