The principal, Melissa Carter, is under investigation by the Clewiston Police Department. 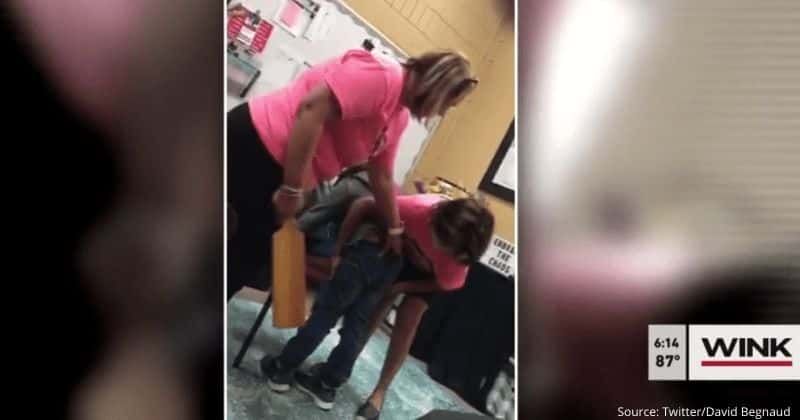 In a shocking incident, a principal was caught on camera spanking a 6-year-old girl with a paddle. Melissa Carter, head of Central Elementary School in Clewiston, was seen bending the child over and hitting her multiple times with the wooden paddle. The horrifying moment was captured on video by the student’s mom, reports WINK News. So what prompted the principal to mete out such a corporal punishment? Well, apparently it was over a computer that the 6-year-old allegedly damaged. The Department of Children and Families and The Clewiston Police Department are now investigating the case.

A 6yo child in FL. was beaten by her school principal, in front of her mother, for damage she allegedly caused to a computer. ⚠️ this video is graphic. It’s infuriating, outrageous & shocking & the principal is now under criminal investigation. https://t.co/M3cIZeTMKa pic.twitter.com/HPAcbYXlXe

The stunned child’s mother noted, "The hatred with which she hit my daughter, I mean it was a hatred that, really I’ve never hit my daughter like she hit her,” the mother told WINK News in Spanish. "I had never hit her," the tearful mother said.  The mother was called by the school on April 13 to pay the $50 fee for the damage to the computer. She was sent to the principal’s office, where she found her child with Carter and a school clerk. However, due to a language barrier, the mother wasn't able to fully comprehend the situation.

Apparently some are still using the paddle-method as punishment in schools. One mom stood by and filmed her child getting paddled by the principal -- punishment for damaging one of the school's computers.https://t.co/HJjMJw7egj

"My daughter was already in the office," recalled the mother. "The principal started to scream. There are no cameras," she said. "What are we doing in this place? My daughter and I, alone." That's when she hid her phone in her bag and began recording. "Nobody would have believed me," the mother continued. "I sacrificed my daughter, so all parents can realize what’s happening in this school." The little child was later taken to a doctor to record the red marks and bruises caused by the paddle. "I’m going to get justice for my daughter because if I could not do it in front of her, I’m going to do it with justice," she added.

I was beat up many many time by my mom with leather belts till mark were left on my legs. Today as older male I will never hit my child and perhaps I learn why I hate people who abuse children’s

Hendry County School District policy does not allow corporal punishment. It clearly states that "the superintendent shall designate sanctions for the infractions of rules, excluding corporal punishment." It also mentions procedures that "do not demean students" and "do not tend to violate any individual rights constitutionally guaranteed to students." Provinsky, an attorney who works with undocumented immigrants noted, "That’s aggravated battery. They’re using a weapon that can cause severe physical, harm. The child is terrified, she feels vulnerable. There’s nothing she can do in the hands of these adults, who treated her so brutally, savagely, sadistically."

I’m shocked that any school principal would have a paddle like that so handy in their office.

To make matters worse, the Hendry County School District refuses to comment on the matter. Parents with children at Central Elementary School are shocked. "The first hit was very unnecessary, very," said Jocelyn Edwards, whose sister attends Central Elementary School."It didn’t take all of that." An unidentified person added, "I really cried when somebody showed me that I cried because it could’ve been mine, it could’ve been mine," the person said. Users online were equally disturbed by the footage. melinda6827 tweeted: What is wrong with these people? That's downright assault. Hitting kids just makes them think it's ok to hit other people when they're older. Isn't that the excuse we hear whenever someone commits a crime? They were abused as kids?

#spanking or #hitting your children is wrong. It teaches them violence is the way to solve problems. It creates trauma. In an #ethics class I said this, and I kid you not a woman was so upset, she quit the class. She defended spanking. Lots of people do. Doesn’t make it right

Experts warn against hitting your children saying that spanking can potentially cause long-term harm. According to NBC News, The American Academy of Pediatrics stated that "experiencing corporal punishment makes it more, not less, likely that children will be defiant and aggressive in the future." The group reiterated, "Parents, other caregivers, and adults interacting with children and adolescents should not use corporal punishment (including hitting and spanking), either in anger or as a punishment for or consequence of misbehavior, nor should they use any disciplinary strategy, including verbal abuse, that causes shame or humiliation." Dr. Robert Sege of Tufts Medical Center in Boston, who helped write the guidelines added, "There’s no benefit to spanking. We know that children grow and develop better with positive role modeling and by setting healthy limits. We can do better."

Today, @AmerAcadPeds put out a new policy against spanking. Spanking and harsh words are harmful and don't work. Here are 10 other ways to discipline your child: https://t.co/69y8aE9dta #AAP18 pic.twitter.com/ZliESNugjL