The tense situation came to the most touching conclusion after Richardson calmed the woman down and comforted her with a hug. 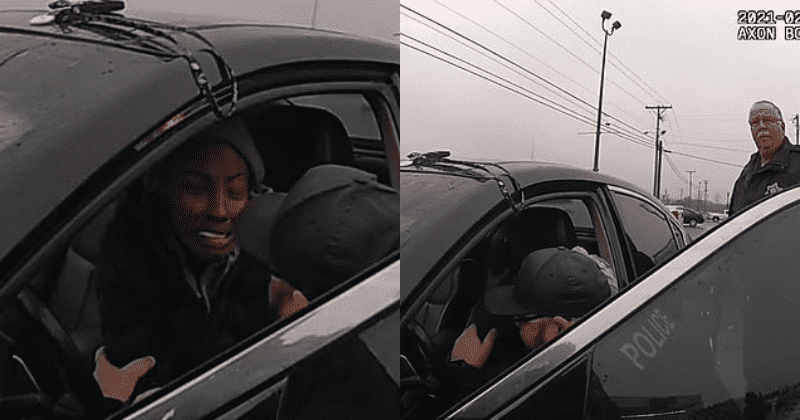 Latrece Curry, 41, was shaken after a domestic dispute with her husband. Instead of waiting for the police to arrive, however, she made a snap decision to flee, with no clear idea of where she was going or what she was going to do. Luckily, a deputy from the Hodgenville Police Department was on her heels before several of his colleagues followed as she engaged them on a chase spanning two counties. Already terrified, the police pursuit only seemed to exacerbate her state of mind and she was nearing meltdown, Daily Mail reports. So, when Chief James Richardson and several of his officers deployed a roadblock, cornered her in a parking lot, and had their guns drawn, the 41-year-old was sure something terrible was going to happen. But, the tense situation came to the most touching conclusion after Richardson calmed her down and comforted her with a hug.

In the bodycam footage of the scene released by the department, we see Chief Richardson slowly inching towards the car and drop his guard as soon as he sees the trembling woman inside. "Calm down, you're okay," he tells her as she breaks down and tries to explain herself. Speaking to The New York Post, he said: "I got to the driver's side door and told her to unlock the door, she had her hands up, she was shaking like a leaf. I mean the poor girl, when I opened the door it was like a look of sheer terror. She was scared to death." Giving more details on the department's Facebook post, he stated: "The look on her face was of sheer terror. She was shaking, and it was obvious she was scared. I talked to her to calm her down and then she hugged me."

Even though the situation ended without complications, the police were ready with guns loaded to use them in case of need. "Of course, we had guns, guns pointed at her, so I just tried to calm her down." At one point the woman was shaking so bad she was incapable of taking her seatbelt off so Richardson had to intervene to get it off her. "I didn't perceive her as a threat, she didn't have any weapons," he shared when asked for his prognosis of the situation. "I took control of her hands, she started crying. She reached out and hugged me and I just kind of hugged her back." Richardson also added that this had never happened to him in his 23-year career.

Once Curry was fully calm, she was detained and charged with endangerment, fleeing police, and traffic violations. When officers quizzed her, she stated that she was in the "zone" and that she didn't know what she was doing. She even told the chief that she was "extremely sorry" for her actions. "She had no criminal record to speak of, had never been in trouble that I know of. She just made a really bad choice," he said. All the credit goes to the officer for reading the situation and de-escalating the situation with ease. "Compassion is a good thing to have, especially in policing. With everything going on in the world today, everybody makes mistakes," he told the Post, adding that the incident is a "great example of keeping your emotions in check at the end of a pursuit."

Sometimes people are just scared. Good on this cop for recognizing that. Need more police like that.

On Twitter, people urged the police to release her because she wasn't entirely mindful of what she was doing. "I sincerely hope that they drop the charges against her, "wrote Krissy. "She had been terrorized and was fleeing domestic violence. I really don't think that she knew what she was doing or made the conscious decision to cause a chase like that."