The 69-year-old helped Operation Gratitude in Washington, D.C. to give back to the military. 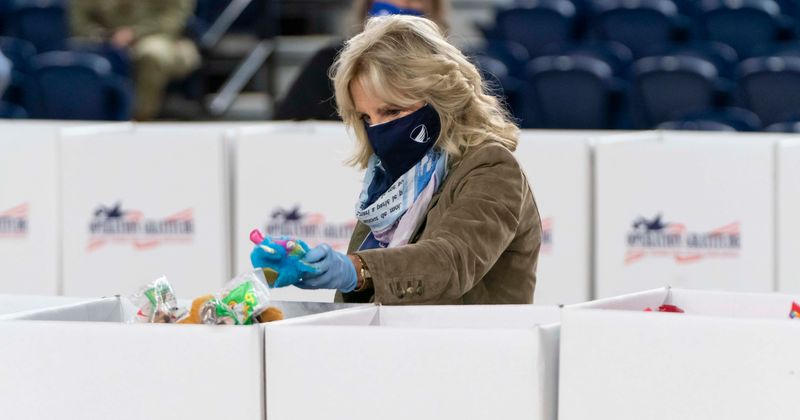 Soon-to-be First Lady Dr. Jill Biden helped assemble care packages for U.S. troops who will be overseas for the holidays. Dr. Biden was seen wearing a face mask and gloves as she put together the care packages. The 69-year-old pitched in to assist Operation Gratitude in Washington, D.C. where she was joined by retired Gen. Lloyd Austin, whom her husband recently announced as his nominee for secretary of defense, reports PEOPLE. "Today is part of a multi-day effort in DC and Los Angeles to pack a total of 20,000 packages," Danielle Tenconi, Vice President of marketing and communications for Operation Gratitude, said in a statement. "Each package contains snacks, candy, 10 handwritten letters of gratitude, and hand-knitted scarfs from more than 1 million volunteers nationwide." Along with the care packages, a sponsor of the event -  Veterans United - encouraged others who wanted to "help deliver holiday cheers" to share a message through their website.

Such an honor to sponsor this event and send 10,000 Care Packages to deployed troops with @OpGratitude this holiday season.

If you want to help deliver holiday cheer to those serving overseason, visit https://t.co/qdcNHxipCV and share a video or photo message! https://t.co/8TlW8fODVt

Supporting the troops has always been a part of Dr. Biden's work, having been a daughter of a WWII veteran herself. When she worked with then-First Lady Michelle Obama to start Joining Forces, an initiative helping active members of the military, veterans, and their family. On Human Rights Day, Dr. Biden shared a message recently about the importance of protecting the "vulnerable" members of our community. Joe Biden said: As the United States works to advance human rights around the world, we must also recognize that our task begins here at home. My administration is committed to ensuring every person is free to flourish in a society that values and defends equal justice for all. To which she added alongside the message: Protect the marginalized. Protect the vulnerable.

Small acts of kindness can mean so much - especially to a service member deployed overseas or a military family missing them at home. Thank you @OpGratitude for letting us join you today and for all you do. pic.twitter.com/Z6x6z17qU2

Dr. Biden and her educational qualifications recently became a subject of debate after a recent misogynistic op-ed in The Wall Street Journal was published. The writer called on first lady-to-be Jill Biden to drop "Dr." as her title. "'Dr. Jill Biden' sounds and feels fraudulent, not to say a touch comic," wrote Joseph Epstein, a longtime contributor to The Journal, reports NBC News. "Your degree is, I believe, an Ed.D., a doctor of education, earned at the University of Delaware through a dissertation with the unpromising title Student Retention at the Community College Level: Meeting Students' Needs. His coup de grâce: "A wise man once said that no one should call himself 'Dr.' unless he has delivered a child. Think about it, Dr. Jill, and forthwith drop the doc." NBC News culture and wellness writer Tonya Russell responded saying, "Still, here we are, degrading working women who fought hard for their degrees in education, whether at the community college level or higher and chose to grow in their roles by obtaining Ph.D.s or Ed.D.s. Instead of mocking those who've gotten the highest education that a teacher can get, let's honor them for being patron saints of patience and innovation, whether or not they can deliver a baby."

Imagine having a platform at the @wsj with an opportunity to use it for good but instead, you use it to insult our incoming First Lady just because you have a problem with powerful and educated women. By the way #JosephEpstein, she is Dr. Jill Biden to you.

Others also slammed the Journal article. According to The Guardian, the president-elect’s communications director, Kate Bedingfield, tweeted: What patronizing, sexist, elitist drivel. The daughter of Martin Luther King Jr also spoke out in support of Jill Biden. She reminding people that her father used the title Dr, despite not being a medical doctor, saying, "And his work benefited humanity greatly, yours does, too." Dr. Biden also tweeted on Sunday, saying: Together, we will build a world where the accomplishments of our daughters will be celebrated, rather than diminished. The Guardian also pointed out that Dr. Biden will soon become "the least traditional first lady in recent history." The outlet also noted that the opposition came from " the idea that many Americans want a traditional and non-threatening first lady – a first wife, first mother, first hostess, first cookie-baker, first-hugger, but not a first career woman and certainly not an ambitious woman." Well, it looks like times are changing.