Trump also claimed the basketball star was a spokersperson for the Democratic Party. 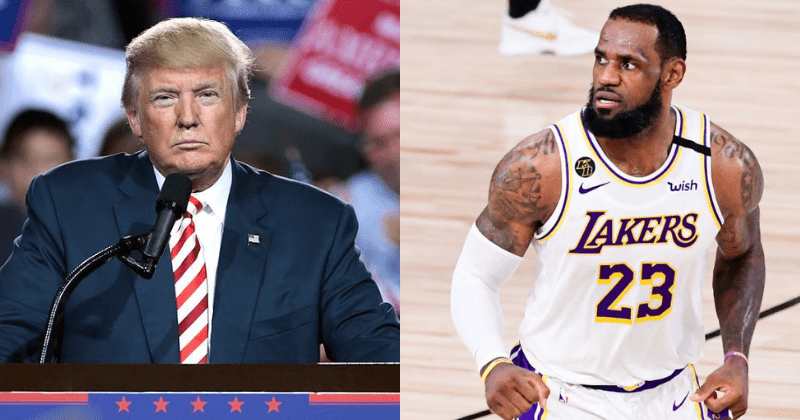 The Los Angeles Lakers won a historic 17th Championship title led by LeBron James, who won his fourth. But this has not impressed President Donald Trump, who hit out at the star for "being a hater." It is no secret that James has been very outspoken about Trump's administration, especially on the issues of police brutality and systemic racism. His activism has put him at loggerheads with Trump on earlier occasions. Speaking with Fox News's Rush Limbaugh, Trump talked about the National Basketball Association's (NBA) low ratings because of what he claimed was the political stance of players like James. "The NBA has become so political that nobody cares about it anymore," said Trump while adding, "I don't even know who's playing in the Finals."

The president then turned his attention on the basketball star and said that while he had not met him, he did not like James for his activism. For what it's worth, he did, however, call him a "great basketball player." Trump said, "LeBron is a spokesman for the democratic party and a very nasty spokesman." Trump once again harped on his often-repeated statement regarding his work for the African American community. He said further, "Because, again, I've done so much for the Black community and people don't wanna see that and he's a great basketball player but people don't wanna see a guy that way. They don't want to see that. We have enough difficulty during the week, you don't wanna sit down watching a basketball game and then watch somebody that hates your guts, okay, He's a hater."

Trump called the Black Lives Matter movement a Marxist organization and questioned LeBron's association with it. He also said the term "Black Lives Matter" was racist since it sowed a divide between people of different races. Back in August, James had said about Trump's criticism of him, “I really don’t think the basketball community is sad about losing his viewership." James called Trump a "bum" in a tweet over fellow basketball star Stephen Curry's decision to pull out from going to the White House in 2017 after they won the championship then. He wrote then: U bum @StephenCurry30 already said he ain't going! So therefore ain't no invite. Going to White House was a great honor until you showed up! In September, Trump lashed out at the NBA with a long string of attacks against players like James.

Trump claimed: People are tired of watching the highly political @NBA. Basketball ratings are WAY down, and they won’t be coming back. He added: I hope football and baseball are watching and learning because the same thing will be happening to them. Stand tall for our Country and our Flag!!! CNN reported that the claims of low ratings by Trump were "a dubious one." It added, "Because of the coronavirus delay, these games are now being played in the summer, when television ratings are typically lower. And they're not all being shown in primetime. But during the first round of the playoffs, Nielsen ratings showed that the NBA made up nine of the top 10 most-watched sports programs, and the basketball helped broadcasters TNT and ESPN to be the most-watched cable networks during primetime among all key demographics."

Trump, ranting about the NBA, complains about LeBron James endorsing Hillary Clinton in 2016: "When he endorsed Hillary four years ago, she came up to his knee, I said that is not the best looking president I've ever seen." pic.twitter.com/fnklnZO1yD

In a 2018 interview, James said Trump was using sports to divide the nation. "What I've noticed over the last few months that he's kinda used sport to kinda divide us, and that's something that I can't relate to." He was speaking about Trump's stance on the national anthem demonstrations by players in the NFL. Trump has repeatedly criticized athletes taking the knee while playing the national anthem. James had said sports should bring all races and backgrounds together rather than diving people. "Sports was the first time I was ever around someone white. I got an opportunity to see them and learn about them, and they got the opportunity to learn about me and we became very good friends and I was like, ‘Oh wow, this is all because of sports.'”