Family’s Dog and Tortoise Play Soccer Together In Adorable Video

The speedy tortoise is named Jaguar for his surprising pace! 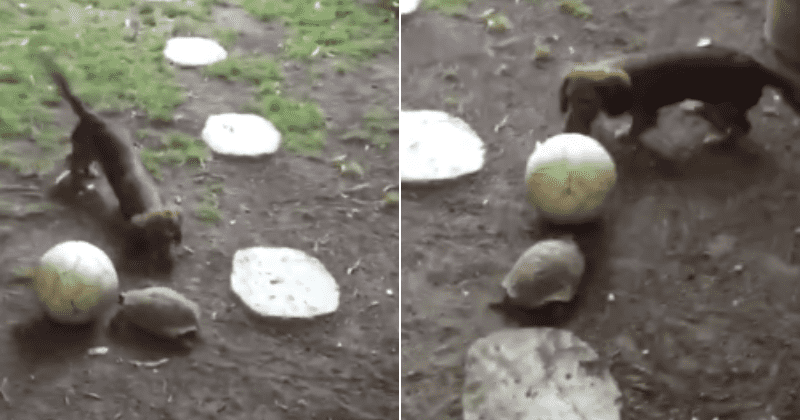 A video of a dog and a tortoise playing football is winning hearts on the internet. According to Good News Network, Rudy Janssens stumbled upon a tortoise 30 years ago while walking around in a small Belgian forest and the cutie has been a part of the family ever since. And this is not an ordinary tortoise. Jaguar is here to break stereotypes. Rudy told GNN they named him Jaguar because “he is really fast—the hotter the weather the faster.” And soon they discovered the reptile had a sporty side to him too. Tortoises aren't as slow as you may think!

When Rudy’s sons were playing soccer in their garden in Antwerp, Jaguar started running after the ball. Soon another pet joined in on the fun. Their dog, a Bouvier des Flandres, proved to be a worthy opponent at the time, with Rudy saying “He could take the ball in his mouth run into the house, with Jaguar chasing him.” Now their dog, a Dachshund named Marcel loves playing both defense and offense and keeps the game going.  “Jaguar has already buried himself in the sand somewhere in our garden,” shared Rudy. “In spring, he will appear again, always a happy moment: He’s back, winter is passed!”

Your good-news story o' the day:

"Jaguar has already buried himself in the sand somewhere in our garden. In spring, he will appear again, always a happy moment: He’s back, winter is passed!”https://t.co/2IZ3IMNPy9

The video features the two four-legged friends in a friendly yet intense game of footy. The video was also posted by jamie to Twitter who termed the game as ‘the coolest thing’ that they had seen in a long time. The clip is about 44 seconds long featuring the friendly football match. Marcel gives Jaguar some tough competition but the tortoise isn't holding back. Marcel can be seen dodging the ball while Jaguar is going at it like no other tortoise we've seen. Towards the end of the video, Marcel seems to be lowering his pace a bit so Jaguar can catch up. While Marcel looks like a big bundle of energy, Jaguar is quite the badass, in terms of speed. Marcel is adorably playful throughout and can be seen nudging the ball towards his competitor. Jaguar looks like he's having a ball of a time too!

Animal lovers gushed over the cute sportsmanship in the YouTube video put up by Rudy Janssens. Keith Guernsey stated the obvious: This is an amazing video b.j. stoner suggested: This should inspire a Disney movie!! David Young mused: The dog thinks it is a game. The tortoise thinks it is a fight. Chris H joked: You have to evaluate your fitness level when you're fairly certain a tortoise moves faster than you do. People on Twitter were raving about the adorable video too. thebrianjenkins joked: What you really need to do, right now, is watch a video of a sausage dog and a tortoise playing football. Yes, really. MonaSigal highlighted: well let’s start woth the fact that the tortoise is RUNNING!!! JoananCharlotte shared: So cute! Love that puppy makes sure turtle get a chance to participate. anujamital tweeted: I have friends in the US who have an Asian Giant tortoise that's as big as a dog in their backyard and is trained exactly like a dog!

That’s crazy. Not only is the dog playing with the turtle but the turtle is clearly playing back! I didn’t think they were capable of such social behavior!