The Chilean government said that an investigation is underway and the officer would be removed from his duties until a further inquiry is carried out. 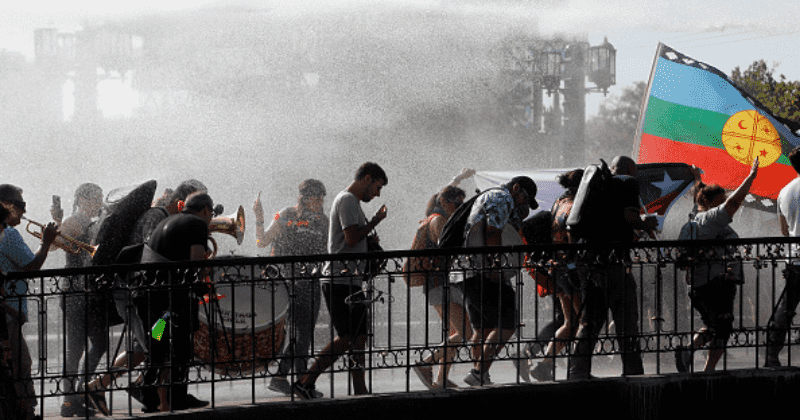 Trigger Warning: This article contains images and videos of police brutality that readers may find disturbing

A police officer in Chile has been detained after a viral video allegedly shows him throwing a 16-year-old boy off a bridge during a protest on Friday. This was confirmed by Chile's Prosecutor's Office and he was soon taken into custody on suspicion of attempted murder, reports CNN.

A policeman appears to have hurled a 16-year-old protestor off a bridge during a demonstration tonight in Chile in an act of cold-blooded contempt - and it is by no means an isolated incident pic.twitter.com/rjqb67WhKI

The incident took place during one such anti-government protest in the capital city of Santiago. Since 2019, there have been major protests against inequality and injustice in the country. Protestors have also been calling for the resignation of President Sebastian Piñera. Many have even taken to the streets to protest against the alleged violent response from Chile’s national police, the Carabineros. As soon as the video went viral, it sparked major outrage in Chile along with a fresh round of protests over the weekend. The video shows the officer and the boy, identified as Anthony Araya, getting into a scuffle following which he falls head-first over the side of the bridge. It is believed that he fell at least 22 feet below the bridge.

People in the world, please help us get out the word: #ChileViolatesHumansRights. The cops in Chile just threw a 16-year old minor over the bridge into the Mapocho river a few hours ago. This is the last of multiple human rights violation during president's @sebastianpinera rule. pic.twitter.com/1O0MlSVq9E

The Chile government said in a statement that an investigation is now underway and that the officer would be removed from his duties until a further inquiry is carried out. The minister spokesman Jaime Bellolio decried that the police didn't help the boy immediately. 'I would have liked if it had been different and that there had been a brigade, a group of police officers that could have immediately gone to the river,' Bellolio said, according to Chilean news outlet Bio Bio Chile.

Meanwhile, the Prosecutor's Office claimed that the cop had "abandoned the victim" and "gave false information to the Prosecutor's Office." However, Nubia Vivanco, the lawyer of the police officer, rejected the charges at a hearing. The lawyer said the officer only followed protocol and that the boy was trying to escape. The incident took place at a bridge over Santiago's Mapocho River and Araya was rushed to a nearby hospital. Many people showed up at the medical center and protested, carrying signs that read: 'He did not fall, they threw him.'

Please keep Chile in your thoughts, a young man was pushed from a bridge into the river by cops during a protest. We are having a change in constitution on october 25 to destroy the legacy built in usa fueled dictatorship.
No authority rescued him.
⬇️⬇️ pic.twitter.com/JaUjLStFiU

Enrique Monrás, the Chief of police in the region of Santiago, denied any untoward action and said that the teenager lost his balance and fell down. And he claimed his officers had immediately called for the emergency services. According to Daily Mail, lead prosecutor Ximena Chong said: 'The cop approached the young man behind his back, lunged diagonally at the adolescent, grabbing and propelling him, raising him over the railing of the Pío Nono Bridge, making him fall more than seven meters to the river bed.'

#Chile | A 16 year old boy falls into the Mapocho River after being pushed by a Carabinero (Chilean police) from the Pio Nono bridge, in #Santiago.#PoliceBrutality pic.twitter.com/e5V7ODtUpj

Thankfully, in a recent update, the boy is said to be in a stable condition with head trauma and a wrist fracture. Meanwhile, people on Twitter condemned the incident. One user wrote: "This could be a watershed moment for the Carabineros, an institution that has long since lost all sense of its duty of care for the population - actively attacking Chileans and denying their right to protest at all cost" Meanwhile another added: "Is not an isolated incident, police in Chile has been damage and attacked people since dictatorship, as they throw bodies in that time, so, is a constant in his actions" A third quipped in saying: "A body floating in the Mapocho river: a kind of picture deeply rooted in the collective memory and imagery of Chilean people since the dictatorship."