It took over 300 hours for the house to be made, and it featured iconic details from the movie 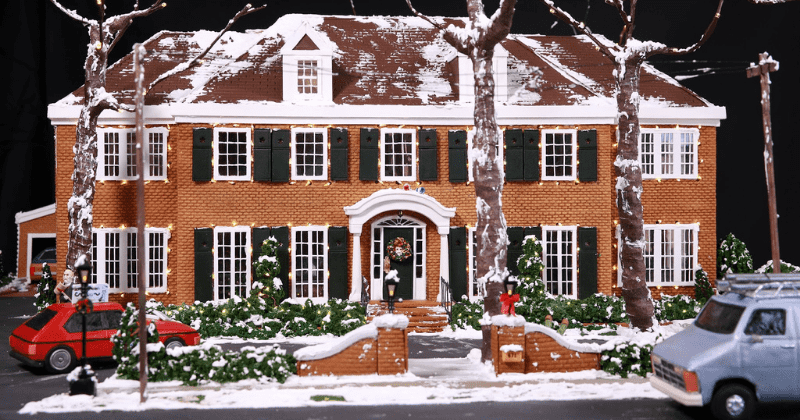 Home Alone turned 30, and to mark the occasion, Disney+ showcased a jaw-dropping gingerbread house in the design of the McCallister family home. The house looks truly impressive, but take a closer look, and you'll be won over by its finer details. Many iconic scenes from the movie have been incorporated into the design. A figurine of Kevin (played by Macaulay Culkin) stuck in the snow in the home's compound with his sled nearby will bring back memories. The McCallister’s treehouse, and the tire swing, were also featured according to House Beautiful.  In addition, figurines of Harry and Marv (played by Joe Pesci and Daniel Stern) a.k.a The "Wet Bandits," were incorporated.

Marv's figurine is on the ground and looks visibly distressed while Harry stands near him with an expression of anger. Besides this, the replicas of the vehicles used in the movie such as The Oh-Kay plumbing van and the Little Nero’s pizza delivery car look strikingly like the exact copy of the real ones in the movie. Then there is the icing figure of Marley, Kevin’s neighbor, the statue in the driveway that is continuously knocked over in the film. The artist behind the gingerbread home is Michelle Wibowo, an aware winning food artist and sugar sculptor from the UK, who has won double gold medals at the Cullinary Olympics (2008-2012). So when Disney+ approached her to make the replica, she jumped at the opportunity.

It took Wibowo over 300 hours to complete the incredibly detailed house replete with 63 trees, 33 windows, and 14 pizza boxes out of gingerbread and icing sugar. According to The Evening Standard, Wibowo studied the architecture and exterior of the home located in Chicago. She then sketched designs of the different parts of the house and then got to work while also not forgetting to put in some very memorable scenes from the movie to the delight of fans. Wibowo said, "I jumped at the chance because it is one of my favorite Christmas movies – it doesn’t really feel like Christmas in our house until we have seen it at least twice!"

She added, "I had so much fun making it look festive and I loved making those cheeky characters Kevin and burglars Harry and Marv. The scene also includes the infamous paint cans, the broken statue, and the Christmas wreath on their front door – I hope everyone will enjoy spotting iconic details from the movie!" Luke Bradley-Jones, general manager for Disney+ EMEA, said, "I can’t quite believe Home Alone turns 30 this month but it still makes me laugh as much as the first time I saw it all those years ago. This film, along with a whole host of other festive favorites, Hollywood blockbusters, and brand new originals are guaranteed to fill you all with festive cheer and we’re looking forward to Disney+ being a firm favorite with everyone this Christmas."

The Home Alone gingerbread house will be displayed at the Oak Centre for Children and Young People at The Royal Marsden in Surrey for pediatric patients and their family members.