'She all I have and I’m she have,' ex-Marine Willie William said about his dog Diamond. 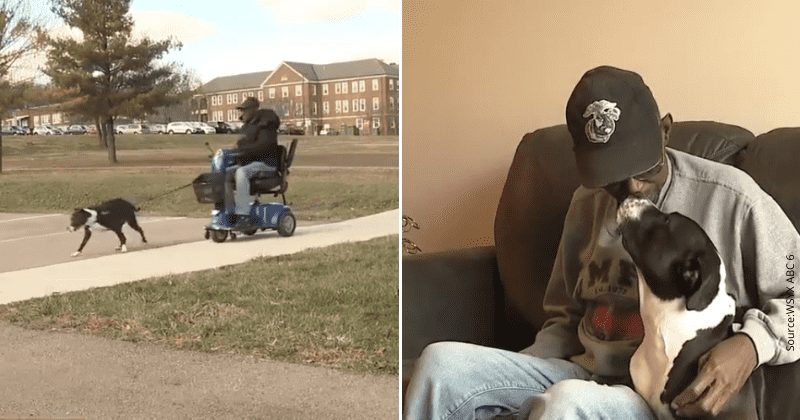 Willie Williams was a Marine and a Vietnam war veteran. Williams is disabled and currently lives at Freedom’s Path, which is a residential community for homeless or at risk of homelessness Veterans, on the Chillicothe VA Medical Center campus. He lives there with his support dog, Diamond. She is his emotional support dog to help with his PTSD, depression, loneliness, and isolation. She is also his best friend. But Williams is now torn after he was told that he could no longer have Diamond at the residential complex. He would either have to move out or get rid of his support dog.

Get rid of your dog, or move out! A Vietnam veteran fears he'll be homeless again. He turned to #6onyoursideinvestigates for help. Hear why he was sent this ultimatum tonight at 6. pic.twitter.com/le0oIR6ipX

Williams told ABC 6 On Your Side that he received an anonymous handwritten that was left on his scooter seat. It read: "Willie, it’s time for you and your dog to go. You will no longer be tolerated. Move out." Williams is not in a position to move out of the campus. “If I have a problem, I get sick, I know the rescue squad is right there. Take three minutes to get there,” he said about Freedom's Path. He has lived there for three years now. Following the anonymous letter, Williams also received another letter from a Columbus law firm claiming that he was told to keep his dog on a leash but didn’t. It also gave him an ultimatum stating it would either be him or the dog.

The letter Mr. Williams received certainly wasn't very professionally written....and it was laid on his scooter?? This lady property manager is dealing with aging veterans---I think she is not well suited for this profession at all.

“It was an accident when she got in the elevator, 'cause when I’m at my friend’s house, I don’t need her on a leash,” Williams said. One neighbor has claimed that Diamond tried to bite him, but Williams has denied this and says this is not true. He has been told by the property manager that the neighbors complain about Diamond. “She’s always telling me somebody else say something about me, she’s going to take action." Williams now lives in fear of being evicted or having his best friend taken away from him. “She all I have and I’m she have,” he said and added, “If it weren’t for her, I just would probably go into total isolation."

Update: A proposed agreement has been reached for a Vietnam veteran to stay home with his dog! All that's needed is a signature. I'll explain the terms, tonight at 6. pic.twitter.com/u4gYQXYepX

Sam Marcellino and Steven Katz stepped up to take up this case for Williams pro bono. The two Columbus attorneys said that Freedom's Path was not able to prove anything they say Williams did wrong. This led them to start negotiating terms with those who had a problem with Diamond to reach terms that would be acceptable to all. The terms of the agreement they arrived at are simple. Williams has to keep Diamond on a leash while on the Freedom's Path property. He will also be required to use a special kind of leash called a gentle leader. After the agreement was signed, the best buds were allowed to stay on the campus.

Get rid of your dog or move out. That was the ultimatum given to a disabled Vietnam veteran in Ohio https://t.co/nh68d8AF8y

Willie, a Marine vet, says "Diamond" is his emotional support dog to help with his PTSD, depression, loneliness and isolation. pic.twitter.com/3iVQlC2MJP

After the emotional and tedious process, Williams said that he was "happy and more relieved now." Following a 2-month-long legal battle, he was officially allowed to continue living in his Freedom's Path apartment with Diamond. After this story broke, in addition to the attorneys who took on Williams as a free client, John McCormack, who owns Semper Fi K-9 Training in Columbus, also reached out via the news outlet in offering to donate his time and training. As a fellow Marine himself, McCormack said that he could not just stand by idly as his comrade was being harassed.

UPDATE: A Marine steps up to help a Vietnam veteran who feared eviction because of his dog, Diamond. Tonight at 6, we show you the training Diamond and Willie are receiving free of charge! See for yourself how Diamond does with another dog in the room. pic.twitter.com/2QcfEF4DWh

McCormack teared up at Williams story and has volunteered his time to train Diamond for "peace of mind and harmony at Freedom’s Path," no matter how long it takes. Rachel Bradford on Twitter wrote, This is so sad, he served and put his life on the line for our country and this is the thanks he gets. That's his best friend she ain't going anywhere. He needs an attorney ASAP. Sending prayers your way. Thank you, William, for serving our country we appreciate you.