Detroit Police Chief Craig said during a news conference that the officers did the "right thing." Protesters and activists have called for his resignation. 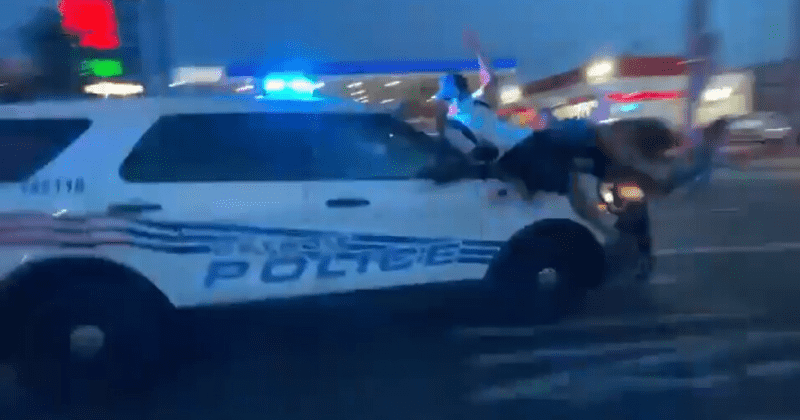 Trigger Warning: The story has videos and details of police brutality that readers may find disturbing

The Detroit Police Chief, James Craig, who is being held accountable by activists for an incident where his department's two police officers drove through a crowd of protesters in separate vehicles, has defended the actions of the cops. Craig spoke to Detroit Today, to whom he said that the officers acted appropriately and are still employed. He told the station there were reports of protesters “plotting to provoke the police.” Craig added, “But if you’re sitting in that police car and suddenly you’re blocked, there is a large crowd around you, they’re banging on the door, pulling at the door, climbing onto the car, what are you supposed to do?” While protesters have called for the officers to be punished and fired this does not seem like it will happen anytime soon.  According to a report in TMZ,  Craig even said the officers "did the right thing" since they had become violent.

Detroit Police Chief James Craig is defending the officers who accelerated through a group of protesters Sunday night.https://t.co/qXX2rn35qy

He also refused to identify the officers who were involved. Craig added that the rear window of the vehicle was also smashed and  “in their mind, they believed they could be shot at.” In In one video, a group of protesters are shown surrounding the cop car, said Craig at Monday's news conference. He explained that protesters got on the hood of the car and the front glass was also covered of the car with a protest placard. The car then sped away. In another video from the car's dashcam, the police chief highlights protesters once again surrounding another police vehicle before it also pushes protesters and goes away. He further highlighted they shouted obscenities at the officers before hopping on the hood.  “There was information that officers reported several of the protesters were armed with hammers,” said Craig.

Although the report said he was not able to point anyone among the protesters were armed with those weapons. When the police cruiser took off, Craig said it was moving at 25 mph. He then asked reporters, “What would you have them do?” Craig also said that the police were looking for a woman on a scooter who blocked a second police cruiser and hit the driver’s side tire. The incidents remain under investigation. This version of the incident, as highlighted by Craig, has been discounted by many activists who were at the site of the protest on Sunday evening. One of them was Ethan Ketner who filmed the incident, according to a report in Michigan Radio. He said protesters had been going about their protest without incident for most of the day.

I'm leaning towards both parties being in the wrong. The police first, for escalating tensions unnecessarily by rerouting protesters who were finished protesting and marching to their cars and had been peaceful for weeks, but protesters for busted rear window at 19 second mark.

“We marched to Vernor, which is where there were four police vehicles set up, and they were blocking the road, Vernor, where we were coming from Dix," he said. Ketner added, "We started to head through those vehicles, past them, nobody was touching the vehicles, nobody was trying to be aggressive with the officers, and all of a sudden, the officer seated in that SUV that you see in the video, turned toward us and drove right into the protesters. That’s where the video began.” Another protester who was seen in the video is Jae Bass. He climbed on the hood of the car. He said, “So we decided to go directly through the roadblock. And that was fine, there were four police cars, we started walking through the cars without incident. Nobody smacked the police cars, nobody did anything like that."

A peaceful demonstration against police brutality took a troubling turn late Sunday when a throng of marchers surrounded a Detroit police vehicle after some protesters jumped on the vehicle in southwest Detroit.https://t.co/Dne3K2pE9g

Plows? The idiots were hindering the SUVs progress, and sitting on top of it. There should be more of this. Keep your dumbasses of the streets and of the cars. No pitty for those fools

He added, "But the police got in the cars, and proceeded to drive through the crowd. At this point, there were about 30 people in front of them, which is obviously endangering the lives of our group, our crowd. So myself and the other organizer of the group, we decided to stand our ground right in front of the police officer. As you can see in the video, he ran into us, and at that point, my buddy fell on the car, and he continued to run into us. When I felt the car pressed against my knee and started digging in, that’s when I turned around and I laid on the car as well. At that point he floored it, and he went super fast and jerked it back and forth to fling us off the car, at which he was successful.” In New York, cops similarly plowing through a group of protesters a few weeks back while inside their car.