The prankster's TikTok page was filled with insensitive videos mocking the severity of the pandemic. 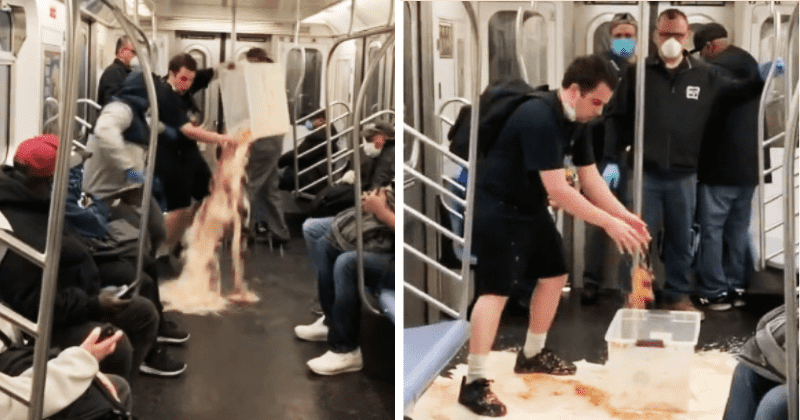 TikTok has seen a huge boom amidst the lockdown, especially with thousands stuck indoors and seeking creative ways to express themselves. While most of them are entertaining and fun, a few pranksters are taking it too far, even endangering people's lives during a pandemic. TikTok prankster @fckjoshy chose the worst possible prank and the worst place to pull it off — New York City subway. The jerk dumped a vat of milk and cereal inside a moving train, endangering the lives of all the essential workers on it. He also pretended to clean the mess but it was obvious he was only making it worse, and reveling in the fact that it was making all the essential workers uncomfortable. He would also be forcing the essential workers to clean up after his mess, literally. Many called for the prankster to be arrested.

The video was posted online by the Metropolitan Transportation Authority (MTA), and the authorities slammed the TikTok prankster for taking the Coronavirus lightly, especially considering all the deaths. MTA didn't take kindly to the insensitive joke and tweeted: A new low: Pulling a prank on essential workers in the middle of a global pandemic. And making essential workers clean up your mess. Despicable. New York is the epicenter of the Coronavirus pandemic, with more than 27,000 people dying. With state governor Andrew Cuomo calling for extreme caution during the pandemic, only essential workers have been using public transport, to keep the city running and thus help contain the spread of the virus.

https://t.co/5lyt3OTKvE he also doesn’t know how to wear a mask apparently. @NYCMayor @NYCTSubway @NYCMayorsOffice @nyc311 really disrespectful to put the rest of the city at risk and make essential jobs even harder at a time where we all need to be working together. pic.twitter.com/P8AduO6Ior

The video footage of the TikTok showed the prankster get on the train heading to 149 St-Grand Concourse station in the Bronx. He pours a box of fruity pebbles and a gallon of milk in a large plastic container, that's clearly not used for the purpose. He begins eating the cereal before getting up and dumping the cereal onto the train’s floor. “I accidentally dropped a whole tub of cereal on the subway today,” he can be heard saying in the TikTok video. “I was like ‘oh my god this is the worst day of my life, not my fruity pebbles.’ Everyone started moving away and filming me, but I was like ‘can someone help.’ Surprisingly no one offered. So I had to put the soggy cereal in myself,” he added.

Towards the end of the video, he can be seen walking out of the train without cleaning his mess. At a time when workers are risking their lives to keep essential services running, he forced subway staff to work extra hours cleaning up his mess. New Yorkers and people on social media were enraged at the guy for pulling an insensitive prank during a health crisis. He was also found not wearing a mask, risking his own life and that of the essential workers. One can only hope the authorities act to limit such irresponsible behaviour.  The NYPD confirmed to TMZ that they were investigating the incident.

Arrest him. He's endangering the lives of people who are trying to do their jobs during a pandemic. If he were anything but white, he'd already be in jail.

The prankster's TikTok page is filled with similar videos of him playing cruel or insensitive jokes on others. In one video, he can be seen wearing a mask with a huge hole in the middle, during a shopping run to a food store and a drug store. It's apparent that he is a repeat offender who takes sadistic joy in scaring essential workers during a pandemic. In another video on his TikTok page, he can be seen mocking the precautionary measures of the CDC, by going around putting masks on statues in the area. In another such video, he can be seen carrying a monopoly board with all the pieces on it before deliberately dropping the pieces on to the train floor. He startles everyone near him and makes no attempt to maintain social distancing even as other passengers are all scared and edgy during the pandemic.