The debate about the song being about rape peaked when the #MeToo movement began. 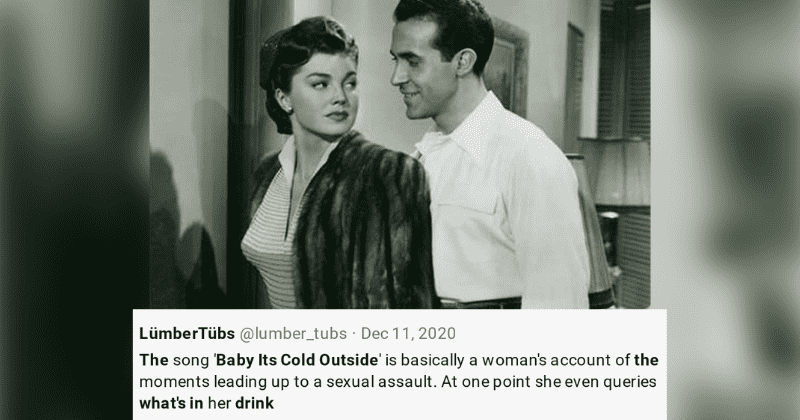 When Christmas rolls around, it can only mean one thing. It's the season of gift-giving, delicious aromas of homemade treats wafting around the house, and getting together with one's family and friends in front of the fireplace. It's during this festive season that we watch classic Christmas movies and sing or hum popular Christmas songs. However, one particular song has stirred up controversy. People have claimed that the song, "Baby, It's Cold Outside" is inappropriate as it pertains to date rape. It particularly became a hot-button topic when the #MeToo movement first began as women around the world went public with their experiences of sexual misconduct and assault.

The song, which became famous in the 1949 movie Neptune's Daughter has been regarded as something from a bygone era. The woman in the song is seen trying to leave an apartment while the man is pushing her to stay with him inside. "I really can't stay (Baby it's cold outside)...I ought to say no, no, no sir (Mind if move in closer?) ... At least I'm gonna say that I tried (What's the sense of hurtin' my pride?)," are the lyrics of the song. Twitterverse was left furious about the song still being celebrated. One user Rod wrote: The worst part is, the dude spikes the drink and the girl says “well at least I tried!” That was mostly written by a sex offender.

It was written by a married couple. The man to his wife. They recorded it together because their friends talked them into it. How does that make him a sex offender?

Another Marcus Alonzo shared: I hear that was a great time to be alive, when rape and alcoholism was acceptable. A third revealed: We refer to this song as "the date rape song" at my house. User @randalgraves7 regarded the song as "the world's finest song about Christmas rape."

In the wake of the backlash, one radio station in Ohio decided to drop the song from their list in 2018. According to ABC News, a midday host on Cleveland’s WDOK-FM, Glenn Anderson explained in a blog post that the 1940s song "has no place" in our world today.

My daughter calls this one the "Date Rape Song".
I'm so proud of the kid.

"Now, I do realize that when the song was written in 1944, it was a different time, but now while reading it, it seems very manipulative and wrong," he shared. "The world we live in is extra sensitive now, and people get easily offended, but in a world where #MeToo has finally given women the voice they deserve, the song has no place."

However, there were some who came to the song's defense noting that it encourages a woman's liberation. FYI, the song is not about rape. The song, at the time was regarded as pro-woman's liberation because she wants to stay, and does so in the end. Her argument for leaving encompasses all of the reasons that society tells her she should not stay, which amounts to a woman being vilified for her sexuality, explained a YouTube user.

radio station are banning a christmas song called baby its cold outside cause of one line in the song were it says “Say, what’s in this drink saying its date-rapey the song doesnt have any indication that he drugged the drink this movement is getting really out of hand

Baby is cold outside was released in 1953.
Benzodiazepines aka Rohypnol were created in 1957 by Roche, a healthcare & pharmaceutical company. Roche started selling flunitrazepam (Rohypnol) in 1975. At first, hospitals used the drug when a patient needed a deep sleep.
Your wrong.

Since the Christmas season is coming up, I would like to say some things.

1. The Song Baby Its Cold Outside is not about date rape. The song was written before roofies and NyquillPM existed.

2. Don't be extra if you don't get what you want for Christmas.

User Ariistra noted: When I read the lyrics, it looked really weird, but watching the actual video, she's just playing with him and teasing him. She shows no sign of actual panic or anything. Twitter user @kakarotta_ftw shared: The song "Baby it's cold outside" is being trashed by people with the #MeToo. It's not a date rape song. Now they are remaking it. Like wtf!! It's a beautiful song! Nothing needs to be changed about it. Sorry, this needs to be said. Stop ruining the song and let it be!

Some even noted how the second part shows the same thing but this time the roles are reversed. YouTube user Nate Mendoza wrote: lol everyone is talking about the first part and the woman is being “forced” but then nobody talks about the second part because apparently women can't do the same. Another pointed out: Weird how when the girl is much more pushy and trying to hold him in but you know, we just don’t notice that.

Seriously? No. It was written by a man for his wife and he to perform at dinner parties. She was actually a little upset when he sold it. If people know shit about the time, and the tropes of the time, they know better. They BOTH want an excuse for her to stay.

Daughter of famous composer of "Baby Its Cold Outside says "It's not a date rape song." She says its a seductive flirtatious song, which was how men used to treat women, https://t.co/sxXV97cegN

Look at the video of the song below and let us know what you think: