Many Twitter users were okay with the Dad hitting his child and said they were beaten up themselves while growing up. 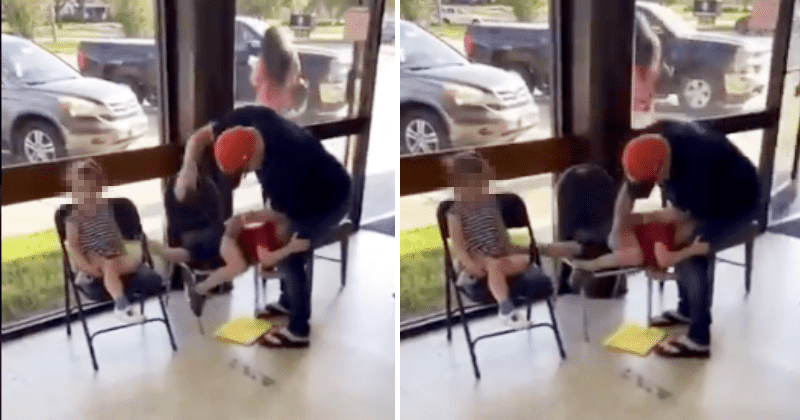 A video of what appears to be a father viciously spanking his young child has gone viral, reopening the debate about corporal punishment. While the man in the video appeared to be using excessive force, the internet was divided on the need for some "old-fashioned discipline." The video showed a man turning a young boy on the chair before hitting him hard on the backside, in public. The boy can be seen howling in pain as the man hits him. The sister doesn't react too much to the beating suggesting it's not the first time the man has hit them. After the man finishes hitting the boy, he turns to the girl and warns her, "sit your ass down." She responds, "Okay," clearly dreading the beating.

Wow... hmmmmm I believe in spankings. I discipline my children with a occasional spank now n then. That's how I was raised, my parents, grandparents, so on, and so on. I turned out fine and respectful to everyone.

BUT, a spanking that bad with hand in public? I'd never do that.

Many were shocked by the video while some said they had faced similar treatment from their parents and it toughened them up. Parenthood, however beautiful it may seem, is no easy task and the pressure to be perfect parents is immense. Children often drive their parents up the wall and engaging with them on a 24/7 basis is exhausting, to say the least. Parents themselves are under a lot of stress, with many not having outlets to let out some steam. However, is it ever ok to discipline kids using physical force?

This is gross and anyone condoning it is disgusting as well. If you have to hit your kids to make them listen, you’re the problem.

Micah minced no words when she classified the video as child abuse and tweeted: That is far too much. Way way too much. Kids are learning and growing still. They’re not full adults who understand everything. This kind of hitting is abuse. Football quarterback Lamar Jackson commented on the video saying, "I turned out fine," suggesting he was hit as a kid. Some users called those criticizing the actions of the father as 'soft.'

All the people that are saying this is abuse probably disrespected their parents and lack discipline. I see nothing wrong here. Compared to how I was whooped, this is light work.

One Twitter user said it just pointed to different styles of parenting. "I’m a black mama... I never struck my child with anything, including my hand, and she turned out fine. By the way — my black mama did whip butts and I, too, turned out fine. Parenting styles are as diverse and unique as we are as individuals," they wrote. Twitter user Miles said kids who are beaten could have issues in their adult life. "Turned out fine in spite of, not because of. The fight or flight hormone is released during any physical altercation and your brain can't decipher “punishment” vs sheer violence and still releases the hormone. This creates adults prone to anxiety, irritation, trust issues," said Miles, before adding, "It also desensitizes the child to violence and often ends up repeating and worsening the pattern of violence."

I was smacked as a kid, slippers belts hands etc. Why haven't I made an Olympic team? Its almost as if it has no actual bearing.
Its amazing what we can achieve whilst carrying baggage.
Imagine what we could do without it?#FalseLogic

One user said such 'disciplining' was nothing but a cover for abuse. They tweeted: Spreading the narrative that “whooping” children is necessary to get them to respect you only justifies child abuse. The fact that they feel comfortable doing that in PUBLIC makes me scared to think of what they do to those kids alone.

Got my ass whooped as a kid... plus those whoopings in public not only embarrass you, it gets your act together 👀

The American Academy of Pediatrics made a case against corporal punishment, claiming it only made kids more aggressive and raised the risk of mental health issues. “Experiencing corporal punishment makes it more, not less, likely that children will be defiant and aggressive in the future,” said the group in its new guidelines to pediatricians, according to NBC News. “There’s no benefit to spanking,” said Dr. Robert Sege of Tufts Medical Center in Boston. “We know that children grow and develop better with positive role modeling and by setting healthy limits. We can do better.”

Today, @AmerAcadPeds put out a new policy against spanking. Spanking and harsh words are harmful and don't work. Here are 10 other ways to discipline your child: https://t.co/69y8aE9dta #AAP18 pic.twitter.com/ZliESNugjL

The pediatrics group also opined that verbal abuse and humiliation is counterproductive. “Parents, other caregivers, and adults interacting with children and adolescents should not use corporal punishment (including hitting and spanking), either in anger or as a punishment for or consequence of misbehavior, nor should they use any disciplinary strategy, including verbal abuse, that causes shame or humiliation,” the updated guidelines state. "Within a few minutes, children are often back to their original behavior. It certainly doesn’t teach children self-regulation," said Dr. Sege.