Dad Leaves Notes And Videos For Unborn Daughter Before Dying Of Cancer: "Just Know I Never Gave Up"

Scott Ferguson also penned a book for his daughter whom he never got to meet. "We will always be proud of you no matter what you do," the book read. 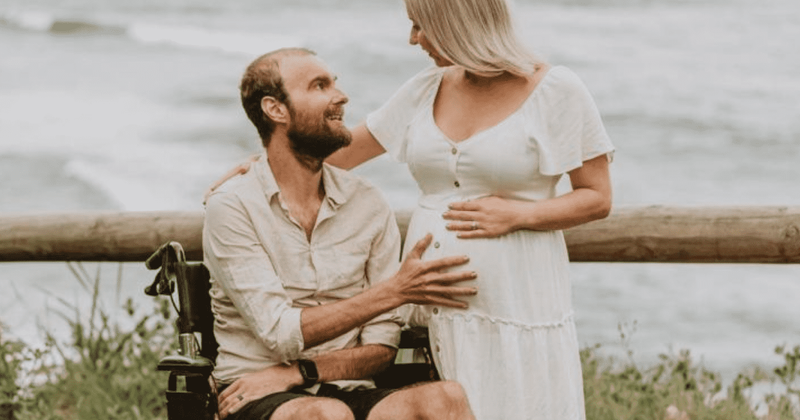 Scott Ferguson, lovingly known as Fergs, was diagnosed with stage 4 glioblastoma in 2018 after he collapsed in a shopping center, in New South Wales. Despite the shocking diagnosis, Fergs was determined to make the most of his life. In 2019, he got married to the love of his life, Jaymie. Soon, in 2020, they found out they were pregnant. According to 7 News, he was given only a few years to live, but had outrun his life expectancy five times, Jaymie revealed. "From the very beginning, he was so positive, everyone that met him was like 'how are you so relaxed'," she said. "He was honestly one of a kind."

After their wedding, the only thing they really wanted was to grow as a family, so Jamie started IVF. Ten months later, they rejoiced because they were pregnant. “It was quite a challenge, so when we found out, we were ecstatic,” Jaymie said. It was also something for Fergs to look forward to. “It gave him something else to fight for,” Jaymie said. “He was so involved in the pregnancy. No matter how unwell or tired he was he would never miss anything. Scott never missed a midwife appointment because he was truly that stubborn." Unfortunately, three years after his diagnosis, Fergs passed away on March 31st.

About a month later, Jaymie welcomed their daughter, and shared a picture of baby girl Isla, describing the moment as one of "the happiest and saddest moments of my entire life". "Fergs and I are so overjoyed to welcome to the world our miracle baby and my savior Isla Scott Ferguson born on the 27th of April weighing an adorable 2.65kg," she wrote. "I'm sure Fergs was with me the entire time and our baby girl is already a mirror image of her incredible dad. I am so in love," she shared, per NZ Herald. Fergs was unable to meet his precious daughter, but he didn't go unprepared.

In a heartbreaking but powerful act, Fergs recorded a series of love messages and advice for the daughter he never got to meet. In one video, he told her he was "fighting hard so that I can be here to meet you. Just know I never gave up." He even wrote a book for his beautiful baby girl. "We will always be proud of you no matter what you do," the book read. "As long as you smile once every day, everything is going to be OK." In the book, he wrote about Isla's future, her marriage, and how he'd be watching over her from heaven. "When you get married, just know that I will be watching and walking you down the aisle," he wrote.

"Grow up dreaming. Follow your dreams, you don't have to live like everyone else," another message said. He even turned his fingerprints into jewelry for baby Isla so she'd have something to hold on to. Now, a close friend has set up a GoFundMe to help the family out. "Fergs has big dreams for his family and we want to help make sure that Jaymie and their daughter get to achieve all of these. Reducing the upcoming financial stressors for his family would mean the world to Fergs and this is one way we can all do that so please donate!" If you'd like to donate, then please click here.