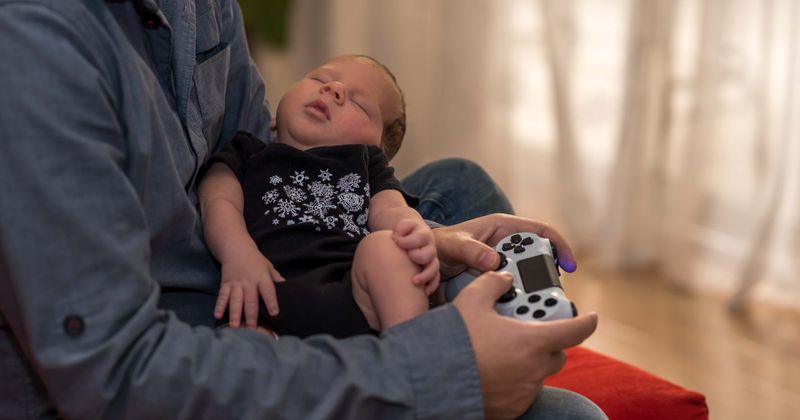 Being a parent is no easy task, so when you've made the decision to become a parent it's important to put in the hard work and by both partners. A 35-year-old woman expressed how exhausted she was with her husband who didn't seem to be committed to being equally responsible for taking care of their child. According to Percolately, she turned to the “Am I The A**hole” (AITA) subReddit, asking: AITA For my reaction when I got home and found my 6-month-old daughter wearing the same diaper for 9 hours?

She explained that she's been extremely busy with work and hoped her husband would chip in to help around the house and take care of the kids. She went on to say: I 35-F been busy with work (I'm a nurse) and taking care of my 6 months old baby girl and her 6 years old sister. My husband works night shifts-3 nights a week so he's usually sleeping at home during the day. He got himself a ps5 a month ago. He started spending time playing. He used to handle some of the house chores now all he does is make excuses of how tired he is and how much he needs sleep. But he'd come home from his shift and starts playing. He drinks a lot of coffee to stay concentrated and awake. Also he stopped eating properly. Keeps forgetting to do things I ask him to do. Like help fix his daughter's toys/take turns in changing diapers etc.

It was clear she needed to get help elsewhere. She said: I started calling my mom to come help since he's been too busy to do simple things. He didn't like that I asked others for help and said I didn't have to. That he'll start helping again. I actually believed him and left for my 8 hour shift at the hospital and before I left I reminded him of everything he needed to do from feeding/changing diapers/cleaning our daughter's room etc. He said "don't worry about it" and then I left.

But she DID have to worry. The tired mom continued: I called him to check on the kids and he said everything was fine. I came home in the evening and I was shocked to see our 6 months old's bed was put in the living room. Her stuff on the couch. While he was playing. She didn't stop crying he said he didn't know what was wrong. Turned out he didn't change the diaper after I left. She was wearing the same diaper for 9 hours. He said he forgot but he was busy playing. I immediately took care of her. I knew her rash was going to get worse after that. My 6 year old's hair was a mess he didn't brush her hair. The kitchen was a mess. I was livid kept yelling at him for being neglectful and reckless and literally forgetting about his own kids over a game.

Dad even tried shifting the blame onto her. She wrote: He said that I was overreacting and that it was my fault for not reminding him on the phone. I told him it was my fault for leaving the kids with someone who doesn't even brush his teeth. He got offended and left the house minutes later. His mom called me telling me that my husband stayes up at night to make a living for his kids and that I was pressuring him by giving him more than he could handle. I tried to explain but she kept lashing out calling me controlling and said I might be frustrated from my job that's why "I'm taking it out on him".I hung up on her and had to take care of all of that mess.Sorry for any mistakes I'm just so exhausted.

Reddit users were quick to sympathize with the tired mother. CPolland12 wrote: I bet he’s one of those guys who thinks he’s “babysitting” his kids.... dude needs to parent his children. What good parent needs to be reminded to change their kids diaper or feed them. Those are basic needs. nora1981 added: On top of the diaper, did he even feed the baby? If he couldn't be bothered to change the diaper, did he bother to take the time to feed her? I mean, the diaper, you can tell. But you can't tell if she ate, since she was already crying anyway. OP needs to get the hell out. If a grown man can't be trusted to not abuse and neglect a baby AND a child, his own kids even, then he's not husband material, he's divorce and terminated parental rights material.