"The picture I first saw of her showed a pitiful creature robbed of its dignity and ready to give up- a dog whose spirit had been broken," the founder of a dog sanctuary said. 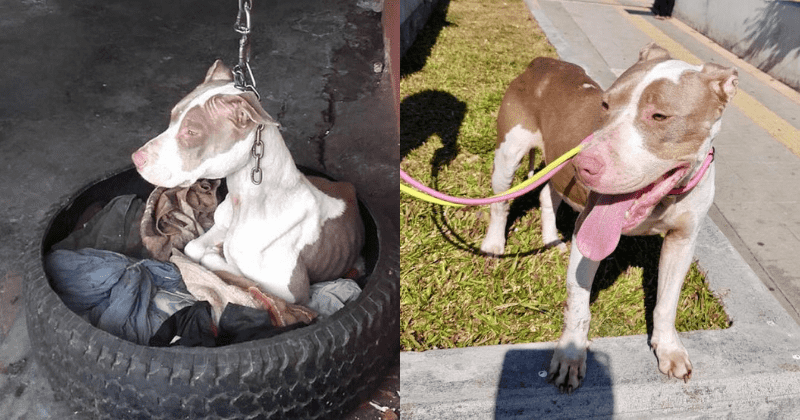 Cala was a guard-dog of a mechanic in San Jose, Costa Rica. She spent years under him, being tethered to a chain so tight, she would choke to death the moment she tried to rest her head. The only thing she could do was bide her time, enduring the abuse where she wasn't given any food or taken to the vet when she got sick. Months passed by before a kind neighbor took notice of Cala and decided to get the local police involved. They also called in Territorio de Zaguates, a local dog sanctuary that cares for hundreds of dogs and rehabilitates those from abusive homes. Since then, the pitbull-mix has thrived under the watchful eyes of caring people.

Lya Battle, the founder of the organization, shares her experience caring for Cala in a chat with The Dodo. "I felt desperately sad and frustrated. The picture I first saw of her showed a pitiful creature robbed of its dignity and ready to give up — a dog whose spirit had been broken and was just waiting for the end to come while living a never-ending nightmare." Thankfully, the local police and sanctuary joined hands to get the dog off the property and took her to a vet, where she was treated for malnourishment and wounds from chains around her neck. Post her medical care, she was moved to Territorio de Zaguates to begin her physical and emotional healing.

The process wasn't easy for Cala as she had to endure more pain till things could get better. The gash on her neck took a while to heal. Battle added: "Her healing process was slow, and the humans around her still had to cause her pain through the curing of her wounds, especially the gash in her neck caused by years of hanging from a tight metal chain around her neck. Nursing her was as painful for her as it was for us, but eventually, she understood that after the pain came love and treats, so she learned to deal with it like a champ." When Cala was introduced to other dogs in the sanctuary, she didn't like it because she had rarely interacted with dogs in her years of confinement. The fact that she was trained solely to attack made things difficult in the beginning.

As days rolled on, she began to untrain herself of all the horrible things her previous owners had taught and began trusting her new friends as well as the people caring for her. The months of rehabilitation both physically and mentally was nothing short of astounding, Battle shares. "We saw Cala go from a weak, feeble animal, too depressed to care, to a stronger creature willing to stand up for herself. With time, we also got to see that willful creature incorporate play and goofiness into her daily routine. With every day that passed, we saw more of her personality come through. She went from fearing humans to trusting them and even ‘bugging’ them for attention."

Just when things looked on the up and up, another tragedy struck -- in the form of a few vile miscreants who laid out sausages laced with poison in the sanctuary, which killed 16 dogs. Cala has eaten one of the sausages, but luckily, she survived. "Cala was still alive when we got to her," Battle said. "Probably her size helped tolerate the dose — that or she only got to a small bite of it. In any case, Cala was saved. She struggled with neurological problems for a while after that but she came around again. She’s just too tough a cookie!" And now, having beaten several odds and blazing through them, Cala has moved to a foster home where she's getting all the love she's missed out on. She has been pretty mischievous too, Battle explains, but her foster mom reportedly loves it. "After years of neglect, torture, and imprisonment, Cala seems to be getting all the puppy misbehaving process out of her system and we all think that's just fine. She is happy, strong, willful, a bit stubborn, and spoiled by her foster mom and family.”