Cop Breastfeeds Malnourished Baby While On Duty, Shows What Real Compassion Is

Officer Celeste Jaqueline Ayala and her colleague were called to a hospital in Berisso, Argentina where they found a family with severely neglected kids, including a 6-month-old baby. 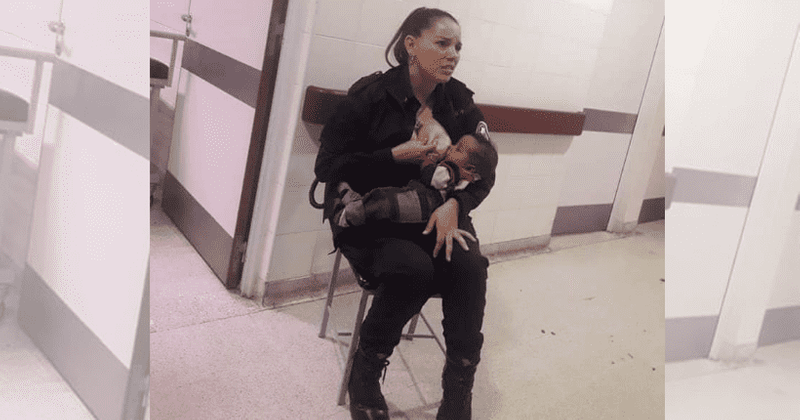 A compassionate police officer in Argentina achieved internet fame when she decided to breastfeed a malnourished baby while on duty. Officer Celeste Jaqueline Ayala was working overtime along with her colleague when the pair got an emergency call from the Children’s Hospital of La Plata in Berisso. A couple and their six children been brought to the hospital by social workers. The children looked emaciated and were dressed shabbily. The youngest was a six-month-old baby and Ayala noticed the child was continuously suckling his hand. Ayala, who had recently given birth, felt deeply for the child and asked permission to breastfeed the baby, reports Goalcast.

Ayala and her partner, Marcos Heredia, also tended to the other kids and tried to ameliorate their situation by playing with them. Deeply touched by his colleague's kindness and maternal instinct, Heredia posted on his social media page, a now-viral picture of his partner breastfeeding the baby while in her uniform. She is oblivious to being snapped by Heredia's camera. Ayala's act of kindness was commended just not in her country but around the world, with the post going viral and receiving thousands of likes, shares, and comments. Explaining what Ayala did at the hospital, Heredia said she took a chair outside and began feeding the child. Ayla said that she felt a very strong maternal instinct since she was caring for her own 18-month-old baby.

She said, "I noticed that he was hungry, as he was putting his hand into his mouth, so I asked to hug him and breastfeed him. It was a sad moment, it broke my soul seeing him like this, society should be sensitive to the issues affecting children, it cannot keep happening. When the children arrived at the hospital, and we saw their situation, we could not stop crying. The kids would cry and we would cry… later the children calmed down." Ayala and Heredia tried to calm them down. Heredia himself was awestruck by her friend's noble act and praised her to no end. He wrote, "I want to make public this great gesture of love that you had today with that little baby… who without knowing you didn’t hesitate and for a moment you fulfilled how if you were her mother. You don’t care about filth and smell… things like that don’t [happen] every day."

In recognition of her kind act, Officer Ayla has also been promoted to the level of sergeant, reports The Guardian. Cristian Ritondo, the minister of security of Buenos Aires province, announced Ayala’s promotion in a tweet: “We wanted to thank you in person for that gesture of spontaneous love that managed to calm the baby’s cry. That’s the type of police we’re proud of, the police we want.” Many other individuals, organizations and institutions have come forward to praise Ayla for her act of kindness. The local fire department, for which Ayala volunteers, also praised her on Facebook writing: "Actions like that of this cadet fill us with pride and force us to redouble our efforts, work, and solidarity with our community," according to the Goalcast report.

She also earned numerous tributes from organizations in Argentina and abroad. Coincidentally, the episode also took place on the National Day of the Female Officer in Argentina.