Athena Wright served as a nurse during the war and presently resides in Scottsdale, Arizona. 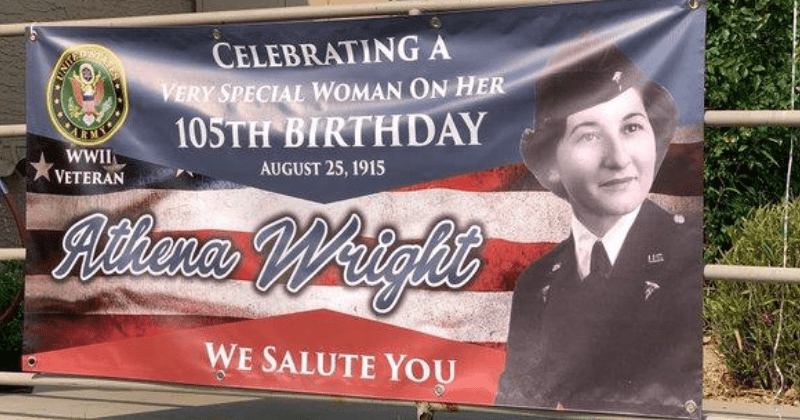 A special birthday parade was held in Scottsdale, Arizona on Tuesday where even city officials and the police were involved. It was done to honor a 105-year-old woman named Athena Wright who served bravely in World War II. Wright was born in 1915. When it was time to enlist for the war, she felt she was no lesser than any man and decided to join the army. She worked in the Army Nurse Corps in the South Pacific and earned two Bronze Stars and reached the position of a Second Lieutenant. One thing that Wright deeply feels for is for her country. To show their gratitude to her service to the nation, the city of Scottsdale invited her friends and family to be part of the one-of-a-kind celebration for Wright participated by several other agencies of the government.

Athena has lived in Scottsdale since 2000 and was born August 25, 1915 in Oxford, Mass. She was a registered nurse who earned Bronze Stars for her service with the U.S. arm in New Guinea and the East Indies during World War II. 1/ pic.twitter.com/FedAxEZQZM

Scottsdale's Twitter account posted pictures and warm messages of the day's events and wished Wright a "Happy 105th Birthday." The handle also revealed that Wright had been a resident of the city since 2000 although she was originally born in Oxford, Massachusetts. She got her two Stars for serving in New Guinea and the East Indies during World War II. What's more, the Mayor of the city went a step further and henceforth declared August 25 as “Athena Wright Day” in Scottsdale. "We honored her w/ a drive-by birthday parade as she sat safely outside," the handle stated. The parade was also participated by the Scottsdale Fire Department, The Scottsdale Police Department, the city's Library as well as the city's "Solid Waste, & Water" department.

Happy 105th birthday! 🎉 Athena Wright served as a 2nd lieutenant in the Army Nurse Corps in the South Pacific and ultimately received two Bronze Stars for her service. 🥳🎂 https://t.co/kgKuPo1Vdx pic.twitter.com/WlPRC7qcgL

The Twitter handle also posted a 30-second video of the parade where a bagpiper wore a Scottish traditional attire designed as a uniform and played the happy birthday song that was sung along by other people present there. Wright was seen outside the entrance of the Pueblo Norte Senior Living community and joyously clapped at the end of the song along with staff from the facility, family, and friends. Wright later told 5News, “I knew I was going to have a parade, but nothing like this.” Speaking about her years of service, she said, “I served my country because I love my country,” said Wright. She stepped up to play her part and help treat the wounded men who were called into action. “They are going to get sick. They are going to get hurt. Somebody’s got to take care of them. So, I said ‘I’ll go,” said Wright, while adding, “If your country needs you. You should serve.”

More than just a birthday celebration for Athena, the parade seemed like a tribute to her life as a veteran and a hero. Wright also lived through the Spanish Flu which struck the world when she was just a toddler in 1918. According to a press release from the City of Scottsdale, Wright became a registered nurse after graduating high school and then joined the U.S. Army in 1941, just before Pearl Harbor was bombed. She worked in hospital stations in Australia as well as in the jungles of New Guinea where she met her husband, a major in the medical corps. The two had a daughter and named her Diane. "I asked why and she said that all the boys were joining up and since she was single she decided to do the same," Diane said about her mother.

In December 1944, she was relieved from active duty after returning to the U.S. They eventually stayed in Washington, D.C. where Wright's husband was originally from. She helped set up the Veterans Administration. Wright worked at the Mt. Alto Veterans Hospital before transferring to the National Institutes of Health, where she worked until retirement.