Jane Marczweski, or Nightbirde as she called her herself, sang a song called "It's OK" 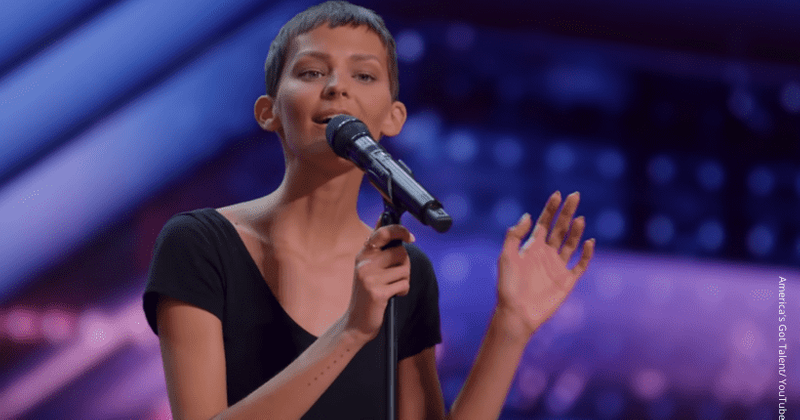 Participants and viewers of America's Got Talent know it's quite a task to please the fastidious Simon Cowell. On a recently-aired trailer of the show's latest season, one contestant named Jane Marczweski, a.ka. Nightbirde, moved the judge to tears. Not just because of her voice but also a tragic background story. When Marczweski took the stage, it clearly looked liked she was not in the best of health. During the introductions, the Ohio native revealed she had  "some cancer" in her spine, lungs, and liver, and that the doctors had devastatingly given her just a 2% chance of survival, according to a Good Housekeeping report. Howie Mandel kindly said "nobody would ever know" she unwell, to which the contestant replied, "Thank you."

She added, "It’s important that everyone knows that I’m so much more than the bad things that happen to me. You can’t wait until life isn’t hard anymore before you decide to be happy." Singing a self-composed number titled "It's OK" the judges and the audience were probably wondering how a person who is facing such adversity can be so upbeat about life. Her beautiful voice and the melancholic lyrics left everyone emotional. In the end, not only did she get praise for her performance, she was propelled straight to the final round of the competition with Cowell giving her the golden buzzer. "Everything about that was really special," Simon told Nightbirde as he hugged her on stage.

Nightbirde had not worked for several years because of her illness and had spent the majority of that time going in and out of treatments. In her blog, she revealed being diagnosed with cancer when she was 29. "I was diagnosed with terminal cancer. Innumerable tumors were found throughout my lungs, liver, lymph nodes, ribs, and spine. I was on the living room floor leaning over the report, head in my hands. Six months to live. Two percent chance of survival," she wrote in a post in November last year. In another post in March, she revealed another terrible news about her marriage falling apart and how "the man I married said he didn’t love me anymore." And while she got her treatment in California, and the cancer was gone for a while, she knew the battle was far from over.

"I have had cancer three times now, and I have barely passed thirty. There are times when I wonder what I must have done to deserve such a story," she wrote. Soon after he performance, she posed on her Instagram page thanking Cowell for "the most unforgettable moment of my life." In an interview with NBC following her performance, she said, "I'm completely blown away, overwhelmed, speechless. It's going to take me a long time to even comprehend what happened. [It's] so amazing." About her condition, Nightbirde revealed, "Physically, I'm doing really well. Again, for me it's just like miracle after miracle after miracle. I just finished up some treatments a week ago and the doctors are anticipating that it's going to take care of everything that was left over."

She added, "We won't be able to test — it's too early to really check. It'll be a few more months until we can go back in and see what's going on. But I'm expecting good news, I really am." Highlighting how she took on her stage name, she revealed, "The birds were singing as if it was morning but there was really no sign of the light yet. And I wanted to embody that. Being somebody that could sing through a dark time because I was so full of hope and assurance that there would be a morning."