Thousands Of California Residents Flee As Wildfires Destroy Over 1.2 Million Acres Of Land

The fire has already destroyed over 500 homes and other structures with 43 people fatally injured. 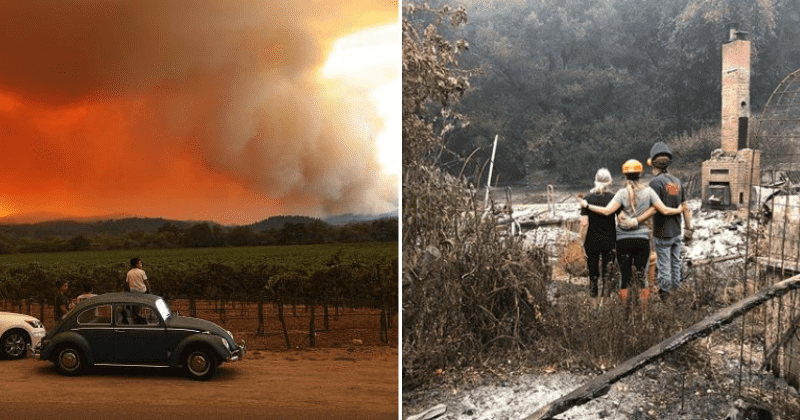 Wildfires have been ravaging the state of California over the past few days. The fire has been spreading and has burned down houses in the process. Residents are fleeing from their homes as the fires are showing no sign of slowing down. According to Reuters, the fire has already destroyed over 500 homes and other structures. Additionally, 43 people, including firefighters and civilians have been fatally injured. The fire has doubled over the weekend and has turned over one million acres of to ashes. Nearly a quarter-million people now face the possibility of evacuation even as firefighters continue to put off the fire in 24-hour shifts.

The fire started after a thunderstorm with over 12,000 strikes of lightning hit dry land , starting over 585 fires. As the fires have been burning in the northern part of the state, California Governor Gavin Newsom announced that the state has received a Presidential Major Disaster Declaration. President Donald Trump has released federal aid to supplement recovery efforts in areas affected by the wildfires, reported CNN. The areas affected include Lake, Napa, San Mateo, Santa Cruz, Solano, Sonoma, and Yolo counties. Over 13,000 firefighters have been working to control the fires.

Governor Newsom said, "We are not naive by any stretch about how deadly this moment is and why it is essential ... that you heed evacuation orders and that you take them seriously," warning Californians. He has been seeking reinforcements from Canada and Australia to help local firefighters with the fire. "Right now, both of these fires are sitting at number two and number three as the largest incident in the state. To have both of those going off at the same time is saying something ... it gives us the magnitude of what has happened here in the last week here in the state," Incident Commander Sean Kavanaugh said of the LNU Lightning Complex Fire and SCU Lightning Complex Fire.

We love you in the winter, summer, spring and in the fall.

Currently, the fire has burned an area larger that is equivalent to the size of Rhode Island. The blaze has also reduced the air quality and the smoke has reached as far as Kansas. The conditions are worsening amid the COVID-19 pandemic. The smoke and heat will have an adverse impact on those who already have respiratory illnesses, especially for elderly people. The pandemic has also wreaked havoc on the availability of resources. Daniel Potter, a CalFire spokesman has stated that they are still short on staff to fight a fire of this size. This is also because of the availability of fewer inmate firefighters since many of them were released early in light of the pandemic.

"Tonight, or today, a weather red flag warning was issued which encompasses pretty much the entire northern half of the state of California and central coastal areas for lightning and erratic winds," Fire Unit Chief Shana Jones warned that residents will have to evacuate. "So, what I'm asking from all of you is -- with the weather predicted, the red flag warning issued -- I can't stress enough the importance of being prepared to leave." Despite the chaos of the fire and people losing their homes, Santa Cruz County Sheriff Jim Hart said there has been a lot of looting that has been happening. Officers have been deployed and are patrolling to arrest people not authorized to be in an evacuation zone.

According to The New York Times, an informal network of residents has been formed to help the flow of communication regarding emergencies and announcement reach as ,may people as possible. "This informal network is happening," Elene Johas Teener said. "There’s Nextdoor, there’s Facebook — all of these groups that are connecting people who really want to help." She added, "It’s weird with Covid. You want to help out, but which catastrophe do you prioritize?"

Disclaimer: This is a developing story, and we’ll update as we learn more. Information about the California fires is swiftly changing, and Shared is committed to providing the most recent and verified updates in our articles and reportage. However, considering the frequency in developments, some of the information/data in this article may have changed since the time of publication