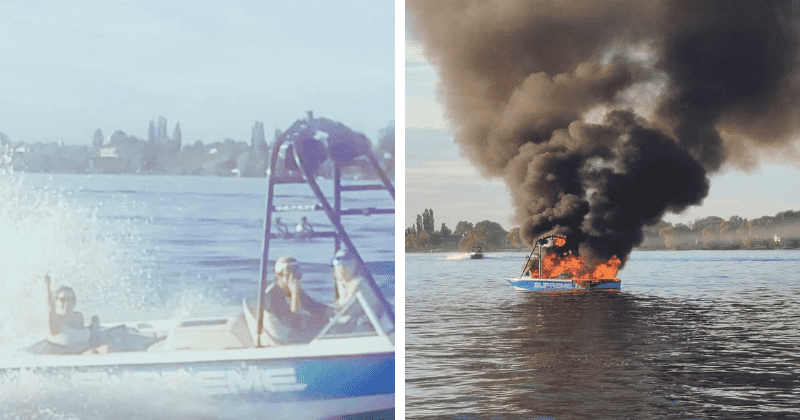 What's more satisfying than watching bullies get what they deserve?  A group of boaters spotted a family waving a Pride flag and decided to harass them. The family had taken their boat, which had a rainbow Pride flag from its mast. They took it out on Memorial Day to Moses Lake in Washington state, reports New York Post. One member tweeted the events of what followed after on Twitter, writing: These people harassed my family because we were flying gay pride flags in Moses Lake, Washington, by racing around us and shouting gay slurs. Then, their boat literally blew up! #KarmaIsReal. And just ONE more tidbit to really drive the karma in there. The driver literally s–t his pants and everyone saw when his shorts fell off in the water.

Video of the event pic.twitter.com/JYLqulzqea

One woman, in the video shared by the Twitter user, could be seen flipping the bird while the victims filmed the harassment. Then the video cuts to the boat exploding. Everyone on board the exploding vessel was unharmed, but their boat appeared to totally destroyed. The clip also shows harassers in the water with life jackets, swimming away from their smoking boat and toward the vessel with the Pride flag. “We safely got them out of the water immediately,” wrote @uhohbigboi on TikTok. “We were nicer than they were.” GarlicPaws tweeted: Them sadly and pathetically swimming to your boat for help. It’s hard to see their faces in the video, but from what little you can see, they look so deeply ashamed. I love it. GoshRae advised: Next time leave their wet asses

I’m so glad Karma got them immediately. Let’s hope the insurance doesn’t cover this.

As funny as it may seem now, now the harassers got what they deserved, being bullied is a terrifying situation and people often forgot how traumatizing it can be. “I also want to show the fear this event has put into my family,”  @retro_ushi_  wrote, “to where we literally start filming everyone who even pulls up close to us now; I’m surprised the camera isn’t shaking because my hands definitely were.” Starlightjenz tweeted: This is the way many of our LGBTQA+ and POC fam lives, in fear of the next attack. I hate to see it. We alone are responsible to make this world a better place. Positive vibes. #equalityforall #fukthephobes. OGBigMack6712 added: I’m so sorry. How awful that there are people out there so hateful.

I'm so glad you're safe and I think you're being smart to start filming when you're approached.

The Grant County Sheriff’s Office has confirmed that the incident took place on Sunday on Moses Lake. Official hav been  working to interview the boat's occupants before releasing more information. The identities of the people involved in the incident have not been released. “We are currently interviewing the boat owners to determine if a crime occurred,” Sheriff Tom Jones told The Washington Post late Tuesday.

And Here I thought We were the ones who're flaming

Thirty-two-year-old Robbie ( who did not want to provide his last name) told NY Post in a statement that he, his brother, and two other passengers had spent Sunday swimming, listening to music, and tubing in the lake about 100 miles west of Spokane. Suddenly a boat full of people started circling around them, harassing them, and shouting homophobic slurs because of their Pride flags. They circled around them at least six times. “At this point, I could clearly hear the words ‘gays’ and ‘flags’ being shouted from their boat,” Robbie said. But karma struck back instantly and the bullies’ boat literally exploded. “Help us! We’re burning!” shouted the woman who had flipped her middle finger at them. The group pulled the burning boat’s occupants to safety and then sped away before calling 911. “The passengers were quite rude, shouting over us, ignoring my [inquiries] about their well being when on the 911 call and smoking a Vape pen on our boat without even so much as asking if they could; several passengers of our boat have asthma,” Robbie told the outlet. Police extinguished the fire and the bullies hopped on a friends’ vessel without saying “thank you,” Robbie said.

Catch me driving up to them bobbing in the water like, “y’know it’s so funny, I do have room in my boat! For an apology :} “