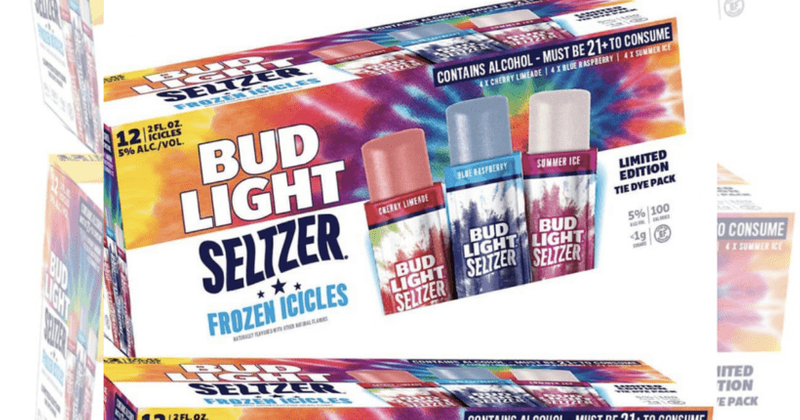 The summer got better because Bud Light just dropped its Seltzer Frozen Icicles! And we're not the only ones who are excited. Whether you're at the pool having a good time with your friends, on a beach with your family, or just chilling after a hard day's work around the house, these icicles are a great way to cool off. They come in three different flavors—Cherry Limeade, Blue Raspberry, and Summer Ice. Each has its own distinct flavor, and of course, with the unmistakable signature Bud Light taste. The company recently announced new seltzers of the same flavors that sure have the potential to be your go-to drink for the season. The company labeled these drinks as "Retro" flavors. But it has gone and one-upped itself by releasing icicles of the same flavors.

TotallytheBomb has described the Cherry Limeade, as "sweet and tart with a full cherry, fruit punch flavor and a zesty lime finish…the champion of summer drinks." The Blue Raspberry is tarty "with an aroma paired with the classic taste of a sweet blue snow cone." And lastly, the Summer Ice flavor was described as a combination of "lemon, cherry, and blueberry" meant to "celebrate the flavors of red, white, and blue in this sweet and refreshing take on a classic." You better get your hands on these treats soon because the seltzer icicles are limited edition. Andy Goeler, Bud Light's vice president of marketing, said in a statement earlier, "We know this summer is going to be a special one for us all, so to celebrate we’re bringing something special to the market for our loyal fans while also attracting news ones."

The weather is getting HOT, HOT, HOT here in AZ and let's be real, there's only one right way to cool off - with one of our upcoming freezer pops! Coming soon we have Naturdays icicles, Bud Light slush pouches, & Bud Light seltzer pops!

Which are you trying first? pic.twitter.com/EJqRGIgViQ

He added, "Our new limited-edition Bud Light Seltzer Retro Summer pack and Icicles are inspired by delicious and iconic flavors which are synonymous with the season and eye-catching packaging that is reminiscent of past summers." Online the news created quite a buzz. Ana Gabriela Moya wrote on Facebook: Only 5% alcohol? Jk . I’m not much for seltzers or bud light beer but I’ll try these . Flavors sound good. Kristy DiCesare tagged a few friends and commented: I feel like these should be a must for summer pools days. Even if they are bud light. There were those who were appalled that such products was being allowed considering how dangerous it was in attracting children to alcohol. Ian Jones commented on Facebook: So the federal government is trying to ban menthol cigarettes under the premise that flavored cigarettes are dangerous to children, yet they let this stuff slide lol.

Any suggestions for finding our local retailers? 💗🤤

Eduardo Smith wrote: I can already hear the stories of parents not being responsible and the kids getting hella drunk! But it's not just Bud Light, other companies such as Costco have marketed similar products like their boozy frozen wine popsicles. Known as Claffey’s Frozen Cocktails, each is 110 ml and made with orange wine. They came in six boozy flavors, including Apple, Cherry Lips, Pink Lemonade, Ice Blue (blue raspberry), Modern Mango, and Purple Party (grape), with 6% alcohol content by volume.