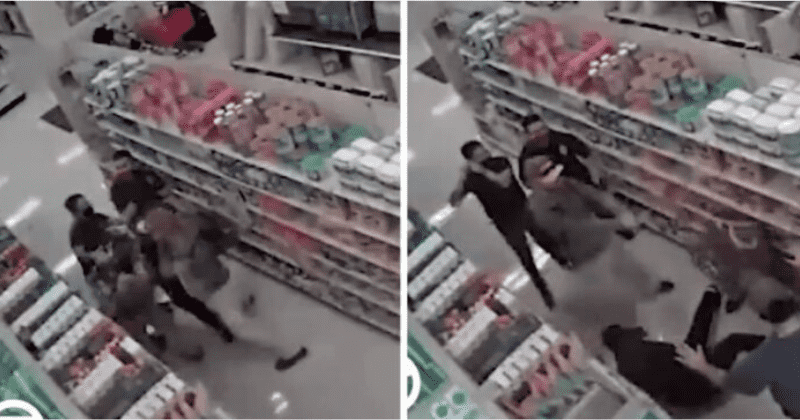 A security guard from a Target store in Van Nuys ended up with a broken arm after two brothers attacked him in a bizarre confrontation. The guard's only crime? Asking the brothers to wear a mask as per store policy or leave. According to ABC7, the incident caught on videotape shows the two men being escorted out of the store by three guards before one of them suddenly turns around and starts hitting one of the guards which led to a squabble between the five of them. As you look close, the footage clearly shows the man assaulting the first security guard who responded to his sudden bout of aggression and wrestled him to the ground. In the 51-second video, the guard can be seen lying on the floor, unable to get up, with a broken arm as the scene clears up with the assailants exiting the store.

FACE COVERING FIGHT: A security guard was left with a broken arm following a physical confrontation with two men who refused to wear face masks inside a Target in Van Nuys. Full story: https://t.co/CMq5LBHIQ2 pic.twitter.com/YL6FwOgi2P

According to the police, the attack happened at 10:20 a.m. on May 1 at the store at 5711 Sepulveda Blvd. The suspects, later identified as 31-year-old Phillip Hamilton and 29-year-old Paul Hamilton, were picked up and arrested on felony battery charges and a bail of $50,000 was set. Lt. Jim Gavin of the LAPD, who was part of the arrest, revealed that the two aggressors were homeless and that this was the fourth such physical incident reported since the mask rule implemented by the store last month. The incident has thrown the mask debate wide open as one side argues the usefulness of wearing one while the other calls it counterproductive. Nevertheless, various people indirectly supported the security guard who had his arm broken.  Twitter user Faithful Luis reacted to the video and wrote: Agree with it or not. It’s store policy. You don’t like it shop somewhere else. No different than no shirt no service.

Two men who refused to wear masks inside Target were arrested after getting into a fight with security: https://t.co/eiV8blbiv5 pic.twitter.com/qMTQisnmLr

Meanwhile, the no-mask brigade found support in the unlikeliest of places. The country's Infectious Disease expert Dr. Anthony Fauci, told 60 Minutes that masks aren't all that effective. "There's no reason to be walking around with a mask. While masks may block some droplets, they do not provide the level of protection people think they do. Wearing a mask may also have unintended consequences: People who wear masks tend to touch their face more often to adjust them, which can spread germs from their hands." User Denise Marie quoted Dr. Fauci as an example and wrote: There's so much ignorance re: masks due to poor information. They are to protect the vulnerable from spit from possible asymptomatic people. Common media, do better.

Stop watching those youtube conspiracy bs, you dont know who is uploading that crap and wear your masks! If I was that security guard Id ask to wear the mask, store policy or ask them to leave, if they dont comply call the police.

Dr. Fauci's statement comes as an opposition to the CDC which has been urging people to use face masks in a bid to control the spread of the virus. Regardless of who believes what, the Twitterverse believes that people doing their jobs shouldn't be the ones paying a high price like the guard. Lena Plummer wrote:  It's a Damm shame that people are only doing their jobs and they are getting shot or ending up with broken body part's what is this world coming too these people are acting like a bunch of salvages Lock them all up and give them heavy TIME 20yrs.

This has nothing to do with whether you should or shouldn’t wear a mask or whether they are necessary or not or even about constitutional rights.

That freedom that makes you want to NOT wear a mask is matched by the freedom corporations & stores have to demand you wear one. 🤷

Another user Father Fanboy cited a Walmart-related example to make an astute point on the driving factor behind such senseless acts: Our Wal-mart had to stop limiting sales of toilet paper and other items due to store employees being threatened. It's not so much that Americans are standing up to tyranny, it's more that Americans just don't like being told that they can or can't do something they want to do...