"I knew it was the end of my dream relationship and everyone was going to witness it," the bride stated. 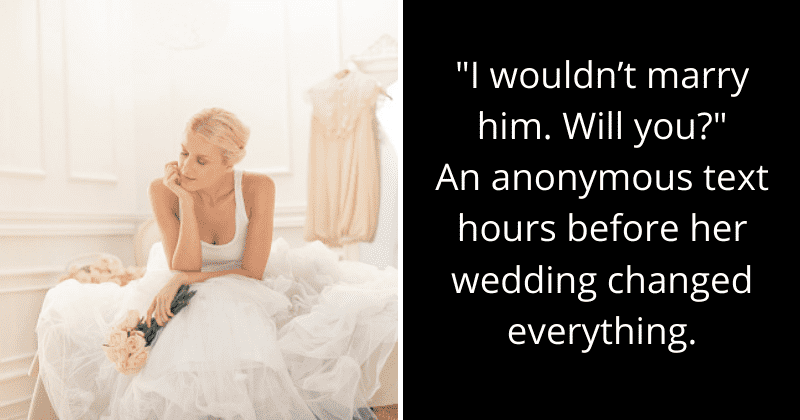 Not everyone is lucky enough to find "the one" they are willing to spend the rest of their lives together. But when you do, you are dizzy in love and see your partner as the best person in the world. At times even missing some obvious signs because you put all your faith in them. It may even escalate to marriage. But what would you do if you got a message from an anonymous number claiming that your fiancé had been cheating on you for a long time, while they were still dating you and even after being engaged to you?

A bride had to confront the truth about her fiancé the night before her wedding. What she did next could probably be the type of dramatic plot twists we see in movies. Choosing to stay anonymous, the Australian bride referred to herself as Casey and shared her story on the website Whimn.

She had been with her now-fiancé, Alex* for six years. She was sure he was "The One" and their families became friends as well. But on the last night of her unwed life, a text changed everything. Casey wrote: I was with hanging out my best friends in a glitzy hotel room. My phone buzzed from across the room and I did a silly sashay with my glass in my hand to go and retrieve it. Unlike the other messages that were congratulatory, this one was different. The message was a series of screenshots from a number I didn’t recognize. The accompanying message simply said, “I wouldn’t marry him. Will you?”

The screenshots were recent and old conversations between her husband-to-be and another woman. There was no questioning the legitimacy of these messages, she wrote. I just knew. Suddenly, little moments added up and I realized I was a fool. This is how some of the messages read:

“This weekend. You and I. It is on hot stuff. Bring your A-game.”
“Your body is f****** incredible. And shit do you know how to use it. I wish my GF had half the skills you do.”
“I miss you so much. I can’t stop thinking about L, S, F’ing you. I’ve never had this kind of connection before.”

There were even selfies of the two together and Casey could not help but notice how different the other woman was from her. I’m blonde and fair, and this unknown woman had dark hair and olive skin, she noted. She was upset and her bridesmaids threatened all sorts of violence against Alex. They even encouraged Casey to call off the wedding. But I loved Alex. I wanted to marry Alex tomorrow, she reasoned. I was too shocked and sad to be angry. I didn’t call him. But overnight she had decided that she would go through with the wedding, but only to "out" Alex in front of all their friends and family who would have gathered.

She put on her wedding dress, "now just a costume" and walked down the aisle and turned to face the room. There will be no wedding today, she announced. It seems Alex is not who I thought he was. Even as Alex tried to stop her, she pulled out her phone and went on to read all the messages he had exchanged with the other woman, weeping. Alex stormed out of the church while his family looked on, horrified. Casey concluded the performance by saying: I love all of you and as horrible as this is I’m glad you all are here. There will not be a wedding reception today, but instead, there will be a celebration of honesty, finding true love, and following your heart even when it hurts. This was met with awkward applause and cheering.