An 11-second video of the incident in Moline High School, Illinois became viral and got the authorities to act. 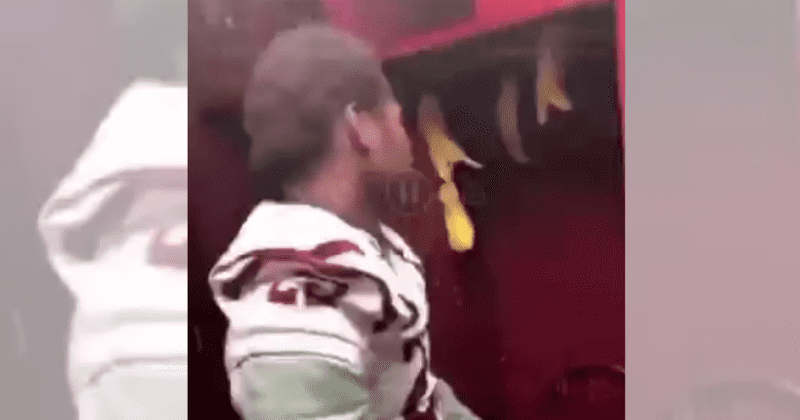 Trigger Warning: The story has a video and details of a case of racism that readers will find disturbing

A Black high school footballer in Illinois was threatened with assault by his teammates if he did not get inside a locker that was littered with banana peels, reports Chicago Tribune. A video of the episode at the Moline High School was shared widely on social media and led to outrage. In it, a teammate who was not seen is heard telling the Black footballer he'll "break both your knees” if he did not sit inside. He complies and shouts of “Yeah!” is then heard from others nearby. While an investigation into the case both by the police and the school was initiated, the footballer said in a statement he was doing "fine" and has sorted out the matter with the people concerned. He said all of those involved had apologized and added he wanted people to "stop talking about the incident" and not "harass" or "threaten" the accused and for people to not treat him like a "victim."

Racist Incident at Moline High School. Seems like a black football player is hazed/coerced into a chair where bananas are hanging. HEATED is an understatement. All I know is that Moline High School has a duty to investigate and punish those involved. @CityofMoline pic.twitter.com/uFRPFhLXpV

Darren Gault, the Moline Police Chief said his department had launched an investigation into the incident and called it a “disturbing racist scene.” He added the high schooler's teammates were “of both different and similar races to the victim.” Gault highlighted further, his department was made aware of the "shocking viral video" on April 9. "The video depicted a disturbing racist scene involving a Moline High School football player in a locker room," he said. The department got to work immediately to get to the bottom of the case. Gault said that they identified "all athletes who were involved in the incident and the circumstances surrounding the video" and confirmed that they were "fellow high school football teammates." Dora Villarrea, the Rock Island County State’s Attorney, urged people to stop sharing the video of the incident and to respect the teen's privacy.

Moline Police and the Moline-Coal Valley School District are looking into a "disturbing" video filmed at the high school. pic.twitter.com/1nyAXHOAb1

It was her office who shared the teen footballer's statements who was not named. “I want to make it known that I’m fine. Everyone is worried about me and showing concern for me and I really appreciate it...I understand everyone wants justice for me and they want what they think is right to be done, but I already made my feelings known to the police and my friends about how I feel about everything. I love the football team I’m on and they’re good guys," added the teen. He said further, "I know that personally. I talked to the people involved individually and they apologized. We had a heartfelt talk about it and I told them how I felt. So please don’t harass, bully, or threaten them at all. Lastly, I want to get my life back together, and my student-athlete life back on track, so if you do ever see me or know who I am, treat me as a human first, not a victim.”

The Moline Police Department is aware of an incident that occurred today at Moline High School which was videotaped and is now circulating on social media.

We are working with the @MolineCVSchools to identify those involved.

School district superintendent, Dr. Rachel Savage spoke at a Moline-Coal Valley School Board meeting on the issue, according to KWQC. She highlighted a "school-based investigation was ongoing", although an investigation by the police was complete. She said all the students involved in the incident were "minors" and that the "details of student discipline are private and protected by federal law." While the outcry of emotions surrounding the case was understandable, she said there was hardly anything she could reveal from it as of now.  Savage said, "This must not be misunderstood or mistaken for lack of action. While it is understood that the context of the behavior plays a vital role, that the students involved were all of color, that they are friends, and admitted to joking around..."

An 11-second video that is circulating on social media shows a Black football player being pressured into a locker with bananas hanging in it. https://t.co/bYLND8NmwU

She said further, "..but it also highlights a greater calling from all of us, adults and students alike, to ensure we as a community and district are doing all we can to coach and guide our youth in a way that encourages respectful and accepting treatment of all in and out of the classroom, on and off the field, and inside and outside of our schools.”