"No, That's My Daughter!" Dad Horrified As Cops Spill His Daughter's Ashes Thinking Its Drugs

Dartavius Barnes is suing the city of Springfield, Illinois and the Springfield Police Department. 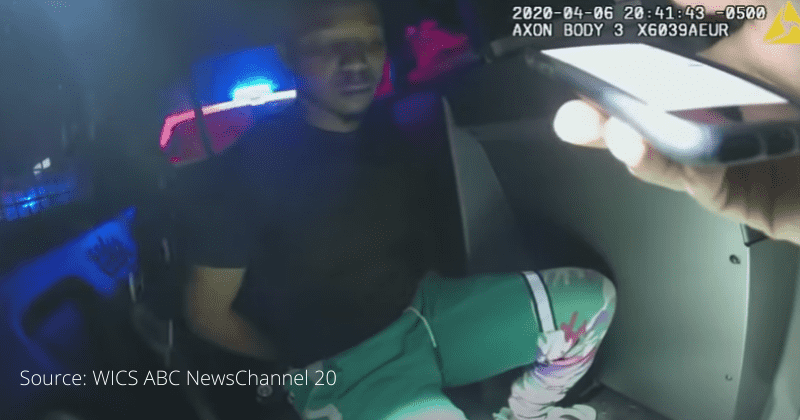 A Black man was pulled over in Springfield, Illinois, last April for allegedly speeding and failing to stop at a stop sign. Dartavius Barnes was placed in a squad car while officers began searching his vehicle for drugs. Police discovered a small metal container in his car. In bodycam footage, officers can be seen opening a sealed urn and testing it for drugs.  Barnes can be heard telling police that the contents of that container were not any illegal drugs, but the ashes of his 2-year-old daughter, Ta’Naja Barnes. “No, no, no, bro, that’s my daughter. What y’all doing, bro? That’s my daughter!” the grieving father said. Barnes is seen seated and handcuffed in the video published by WICS. “Give me that, bro. That’s my daughter. Please give me my daughter, bro. Put her in my hand, bro. Y’all are disrespectful, bro.”

Barnes’ 2-year-old daughter, Ta’Naja, died of neglect in a highly publicized case just a few months earlier. Officials found the baby girl unresponsive and wrapped in a urine-soaked blanket inside her home on February 11, 2019. She was later pronounced dead at a hospital in Decatur. The little girl died of neglect and starvation at the hands of her mother, Twanka L Davis, and her boyfriend. The two were sentenced to decades in prison over Ta’Naja's death, The Washington Post reports.

Many Twitter users believe that it is likely the cops knew about the case and who Barnes was. When Barnes was pulled over, he admitted he had marijuana in the vehicle, but said that was it. He was put in the back of a patrol car for about 20 minutes while officers investigated and found nearly 80 grams of marijuana stored in plastic bags and a Mason jar. When they picked out the urn, they suspected harder drugs. “At first I thought it was heroin, then I checked for cocaine, but it looks like it’s probably molly,” one officer said. “X pills?” another cop asked, referencing ecstasy. One cop told Barnes he would be arrested because they had found either meth or ecstasy in the center console of his car. “What?” Barnes asked before asking to see the illegal substance police claimed they had found. That's when he realized they were talking about - the urn with his daughter's ashes. Later at one point, an officer who appears to be filing a police report said, “I’m just going to give him a notice to appear on the weed.” “Aside from p---ed-off dad and testing the dead baby ashes,” another officer replied.

They should be fired and banned from ever working at another police dept again.

Barnes was later released and given a notice to appear in court for illegal possession of cannabis. On October 6, 2020, Barnes filed a complaint against the city and the police department. He filed the lawsuit against the city and the six officers in the US District Court for the Central District of Illinois. He is seeking compensatory damages and a trial by jury. In the complaint, he mentioned that officers opened the sealed urn without consent and spilled some of his daughter's ashes during the drug-testing process.

The tests they are using are disturbingly unreliable if they identified human ashes as MDMA. I hope locals work to pressure them out of use by the police department. This should be a main example.

Barnes said they "desecrated" the ashes of his 2-year-old daughter. The complaint goes on to say the officers "acted knowingly, intentionally, willfully, and maliciously." The officers accused in the lawsuit denied that they unlawfully took and unsealed the urn. They also deny that they unlawfully spilled the ashes. Police added in their response to the suit that they're, "entitled to qualified immunity as their conduct was justified by an objectively reasonable belief that it was lawful." A judge has set a jury trial for August 2022.

Twitter users were outraged by the devastated Black man's encounter. Babyblack1977 tweeted: What’s crazy is that his daughter was murdered by her mom & mom’s boyfriend. It was publicized and apparently the cops knew Dartavius. Damn, it’s like he relived the pain of losing his daughter all over again when the cop showed him the urn. bobbyoffshore added: That was beyond ignorance and cruelty they have disgraced that poor child’s ashes. Nothing to say the trauma the father and family must endure.

I live in Springfield. These cops knew exactly who that man was and about his daughter. The local news reported on that case for over year. The police in Springfield are the worse. There is to many stories that don't get talked about.