On the anniversary of Beth Chapman's death, her family hosted a beautiful sunrise hike t the Hanauma Bay Ridge trail in Hawaii. 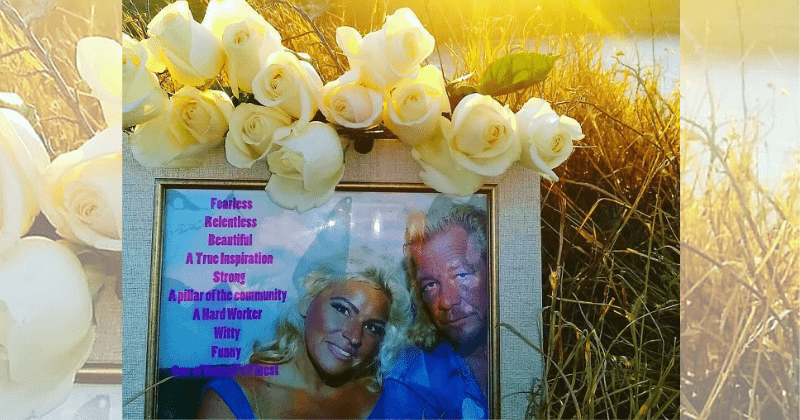 It has been a year since Beth Chapman passed away. In honor of her memory, Dog the Bounty Hunter and the rest of Chapman's family held a beautiful sunrise hike, PEOPLE reports. The hike was organized and hosted by her daughter Cecily Chapman. It took place at the Hanauma Bay Ridge trail in Hawaii. She uploaded a series of photos from the event to Instagram with the caption: #ForTheLoveOfBeth 1 Year Sunrise Hike. The post went viral on the social media platform, with dozens of fans leaving messages of love, positivity, and condolence in the comments.

In the first photo, you can see a photo frame with a photograph of Beth and her widower Dog the Bounty Hunter placed inside it. The photo frame is atop the hill, with the sunrise in the background. There is also a bouquet of yellow roses placed on top of the photo frame. In the last photo, you can see the back of Cecily's hoodie. It reads, "In loving memory of Beth Chapman." It is heartwarming to see that Beth's family still remember her every single day, as do many of her fans. One of her fans wrote, "Awesome! Closer to your mama as you hiked, I believe in spirits and I’m sure she was with you. #LoveYouCecily #MissYouMrsBeth." Another added, "I can’t believe it’s been a year! I’m sending you all of my love to you and your family." Beth's fans extended love to her daughter as well. "Thinking about you today," one wrote. "Your mama would be so proud!"

Dog announced the hike earlier this week, encouraging others to join in with the hashtag #ForTheLoveOfBeth. He wrote on Instagram: Prayer will take place on the beach and in the water. Bring your board and flowers so we can remember Mrs. Dog the right way. For those who do not live in Hawaii and would not be able to make it to the sunrise hike, he asked that they go on a walk or hike and take a picture for the love of his life. He added: Let's make it viral. Post a picture on all your social media accounts using the #ForTheLoveOfBeth hashtag! Please share and spread the word!

Just last month, the widower paid tribute to his late wife on what should have been their 14th wedding anniversary. He uploaded a photo to Instagram featuring the two of them. She said, 'Big daddy [you're] going to be so sad when I am not here on our next anniversary, he wrote. Why did she have to be so right? Though Dog has been quite open about the feelings of grief he has experienced since her passing, he has found comfort in his new relationship with Francie Frane, a 51-year-old rancher from Colorado. Just months before Beth passed away, Frane lost her husband to cancer as well. Beth died of stage II throat cancer.

In May, Dog announced his engagement to Frane and added that Beth would have been on board. "I need a partner," he said. "I've said it before. There will never be another Mrs. Dog. There is not. Francie couldn't do that. There will be a last Mrs. Chapman. If Beth was here, and saw Francie and saw how she was raised, her morality and this and that, Beth would say, 'Big daddy, don't lose her.'" He added that he would never forget Beth as a spouse. He affirmed, "I will never forget. But I've got to get out there. I've got to be able to say, 'I came out of this and you can, too.' As a human being, I don't think you look for — not a replacement, because you can never find one. I'm learning that right now."