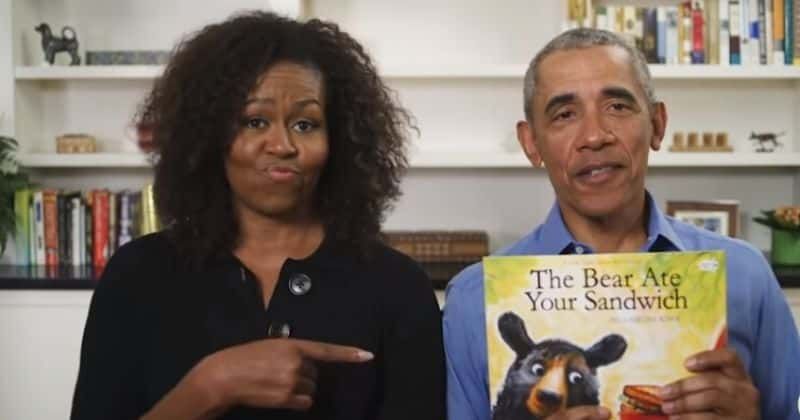 There's nothing quite like listening to Michelle Obama read you a happy children's story. The former first lady has been giving virtual storytimes where she read Julia Sacrone-Roach's The Bear Ate Your Sandwich. She was joined by her husband and former president Barack Obama on Monday for one of her book reading sessions. She also read Giraffe Problems by Jory John and illustrated by Lane Smith on her own. According to CBS News, it was part of the latest installment in the Becoming author's partnership with Penguin Young Readers, Random House Children's Books, and PBS Kids. The former first lady has undertaken these initiatives to boost literary interest in kids. This series is named "Mondays with Michelle Obama" as a four-week long spread that runs from April 20 to May 11 where she read one children's book each Monday.  The program was recently extended for four more virtual storytimes, two airing May 18 and two on May 25.

On this Monday's episode, Barack joined the read-along with his wife and it was live-streamed on the PBS Kids and Penguin Random House social media pages. They took turns to read each page as the Obamas went on to bring their inner storytellers to life. They used to do this often with Malia and Sasha while raising them up and were quite used to this role. “What do you think happened to the sandwich really?” the former president, 58, asked his wife, 56, after she read "The End" and closed the book."I think... the dog ate the sandwich," the former first lady quietly says as her husband laughed, "It wasn't the bear!" He also chuckled and teasingly emphasized the dog's effort. "If you can come up with that good a story, though, you kind of earned your sandwich," he joked.

Both Michelle and Barack also read to kids at the White House on previous occasions. The most notable out of these was reading and acting out Maurice Sendak's Where the Wild Things Are to children at the annual Easter Egg Roll in 2016.

Michelle said in a press release about the read-along that she loved to read aloud as a kid, the outlet reports. "And when I became a parent, I found such joy in sharing the magic of storytelling with my own children—and then later, as First Lady, with kids everywhere." As for next week's episode, Michelle will read the Dr. Seuss classic Oh, the Places You'll Go! and Troy Cummings' Can I Be Your Dog?  The latter will also include a special guest. "Mondays with Michelle Obama" live streams on PBS KIDS’ Facebook page and YouTube channel at noon ET as well as on Penguin Random House’s Facebook page.

The boys are here 😍 pic.twitter.com/RJZGkiXiil

Thank you, my granddaughters have been enjoying your story time. ❤️

The schedule for "Mondays with Michelle" was released last month and Michelle was all set to read a new book to kids every Monday for four weeks. Some of the other notable ones on the list include: There's a Dragon in Your Book, Miss Maple's Seeds, and The Very Hungry Caterpillar. The video series was met positively so much so that they have decided to extend the show for another two weeks, each with two new books to be read aloud. This week's episode had Barack Obama as a special guest, however, it is still unclear if anyone will join Michelle next week.

Michelle originally planned to start these reading sessions to help out parents who were working from home or being an essential worker. Since there are no schools or daycare centers due to the coronavirus pandemic, children would certainly need adequate tutoring.  A collection of activities, tips, and resources for each of the books that Michelle reads are also available at readtogetherbetogether.com, and companion literacy resources are available on pbskidsforparents.org.