So far, in under a month, he has put together 40 desks and plans to make at least 50 more. 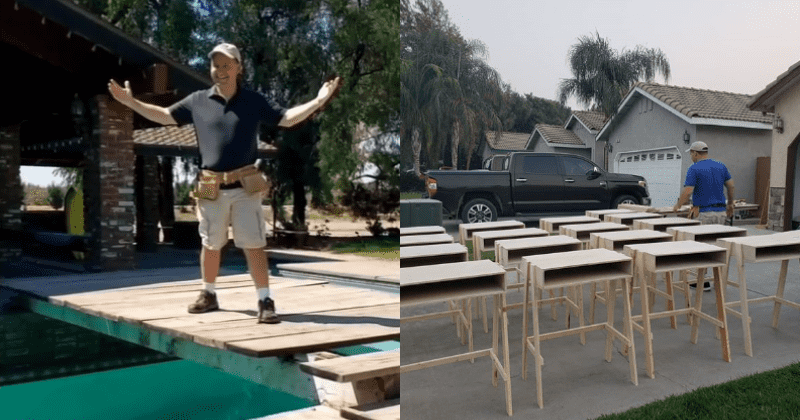 With the ongoing pandemic, online classes have become somewhat of a norm as schools are now forced to impart knowledge to children digitally as opposed to a classroom setting. However, as some students live in underprivileged conditions, they cannot even afford to have their work station where they can set their PCs up to listen to classes unhindered. That's where this kind-hearted dad from Lemoore, California stepped in. His aim? He wants every child in his community to have a work station of their own, reports Today.

Mitchell Couch is a father of four and a former carpenter. After watching children in his community struggle to listen to their classes early, he decided to assemble dozens of desk especially targeting students from low-income households. The doting dad's novel project received inspiration right from home as his kids took over the kitchen table earlier this month as classes began with all public schools from his area going full-virtual until further notice. "They were trying to work across from each other and their books were all over the place. It was a mess," he told the outlet. "So I decided to build them each a desk.” His simple act of building desks for his children ended up having far-reaching consequences as the children were far more adept at gleaning from their classes.

Good afternoon and welcome back! Round of applause for super dad Mitchell Couch for creating desks for local kids! After uploading a video of himself creating DIY desks for his kids, Mitchell has been blowing up all over the internet. Way to go super dad!

"Right away, my wife and I noticed they were more focused," Couch stated. That's when a genius idea struck him —he wanted to help other families. And, to do that, he set up a DIY Youtube video where he taught people how to make a folding desk all for $20. His selfless venture took off from there as a local Grocery Outlet contacted him to ask if he was willing to make desks if they paid for the materials. The 44-year-old didn't hesitate for a second before accepting the offer. "Of course, I loved the idea," Couch said, thinking back to the conversation. So far, in under a month, he has put together 40 desks and plans to make at least 50 more.

His work is getting noticed elsewhere as well as he's getting requests from all over the country. "People are begging for desks," Couch added. "I've gotten thousands of messages." The Couch family has also come together to open a GoFundMe account to receive donations so that they could make a few dozens more. Talking to CNN on how exactly Couch arrived on this idea, he said: "We heard from teachers that the kids who have their own space to learn do so much better with distance learning. It's so much easier to separate home and school life that way. When you're done with school, you can leave the desk and come eat at the kitchen table."

Couch works full-time as a building inspector for the city of Corcoran but the messages he's received from parents, teachers, grandparents, and most importantly, students, of gratitude and appreciation have kept him going. "If I can help the community get through this pandemic with some wood and nails, you bet I will keep at this," he concluded. People commented on the DIY video thanking Couch for his unique offering with several of them even writing that they made the desks themselves after watching the tutorial. Eric Gymer added: "Mitch, I made two of these desks today for my boys. Thank you so much for putting this guide out there. You saved us a lot of money, I got to do a project with my little guys and now they have a dedicated spot for learning. They are excited to have their very own desks. Your directions were spot on and made building them simple. Thank you from me and my family."