Jeff Jester from Warren had a lot of the antlers lying around and wanted to do something different with it. 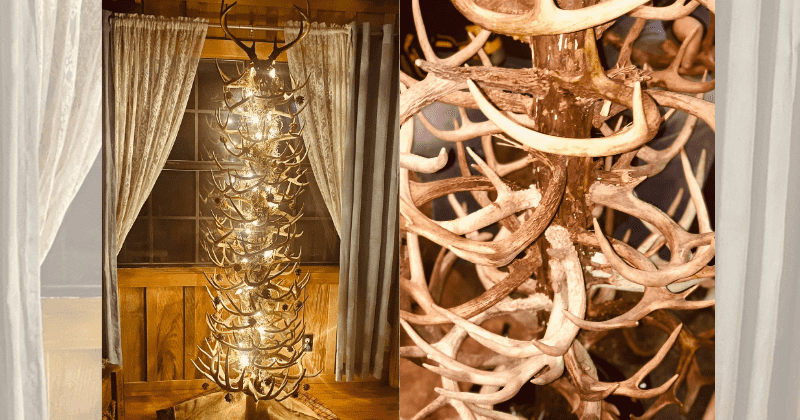 Jeff Jester, a resident of Warren in Arkansas made a Christmas tree using deer antlers. Yes, you read that right - deer antlers! But before you read further, know that no deers were harmed while making this tree because Jester just collected antler sheds and finally decided to do something about it. And boy did he make good used of the antlers. The deer antler Christmas tree does not just look good. It looks majestic especially when the lights on it are turned on. The unique tree has also given this happy family quite the fame with media houses inquiring about the tree and the Jesters doing interviews.

It has also brought in the potential of a business with many people not just commending his work but also asking him to make one for them. But to say that Jester did it all by himself would be wrong. His wife, Meggan did half the hardwork and was the one who planted the idea in his head. Speaking about how he got started, Jester told Fox News, “I’ve had them put away in bins in my shop for several years,” while adding the idea of the tree came to him when his wife asked him to replace the artificial tree they would usually put up around this time. Jester said his wife insisted on a live tree. But Jester wanted to try out something different.  “She’s always wanted me to do something with those antlers. So I washed them off, laid them out from large to small, and went to work putting them together,” he said.

When Meggan realized her husband's plan she also got to work and helped out every step of the way. Jester described his wife as the “the creative one.” But putting the idea into action was hard work that led to several hours of toil. Jester added, “We probably put about 15, 16 hours of work in the tree, and once it started coming together, she could actually see it.” But when it all came together, the family was stunned and surprised at the outcome. Jester said, “She got excited about it — we both got excited about it.” He put out several pictures of the tree on their Facebook page with the caption: My wife said she wanted something different this year for a Christmas tree. So I got creative and dug out my collection of sheds and went to work. To my surprise it turned out well! #happywifehappylife.

The reception was immense and extremely positive. One commenter, Carole Little wrote: Well this is just phenomenal! I’ve wanted to do something like this but my sweetie is never on board for it. I’d want it to look just like yours and I’d leave it up year round. Absolutely love it. Another named Hollie Oldham Files wrote: Love this so much, and would love details on the other materials that were used. Not just appreciation, Once they put the creation out in the public, Jester also claimed they've just been bombarded with one request after another for more customized antler Christmas trees. And he said he will try and look into making a few for others. “We had gotten a lot of requests to build these trees for other people, and so now we’re looking into it,” he said.

While Meggan might have wanted a live tree earlier, Jester said she was totally taken with the new tree they built together. Who can blame her especially since the tree looks so good. So no more live and traditional Christmas tree for the Jesters not just this year but probably forever. “This one will probably be the last tree we ever have, because I don’t plan on ever taking it down,” he said.