trending celebrity people lifestyle news animals
He Knew He'd Lose Her To Cancer, Yet He Gave His Wife Her Dream Wedding; She Died In His Arms 7 Months Later

He Knew He'd Lose Her To Cancer, Yet He Gave His Wife Her Dream Wedding; She Died In His Arms 7 Months Later

"I have a huge hole in my heart in which I fear will never be filled. But I have so many amazing memories of our time together," said the heartbroken husband. 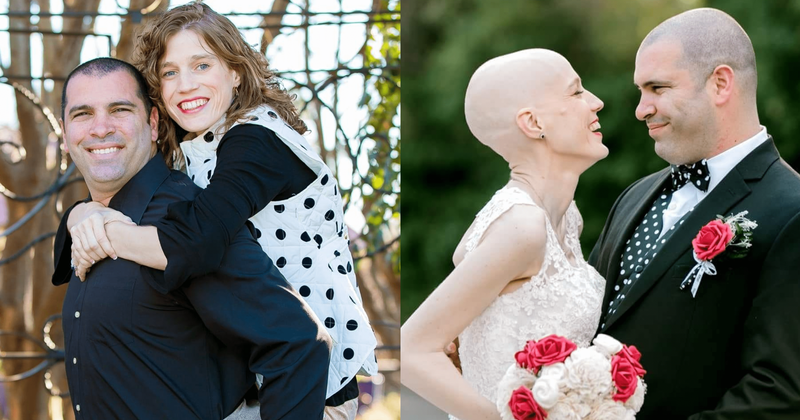 Laurin and Michael Bank's love story is more heartbreaking than any of Hollywood's romantic classics. From coming across each other on an online dating website to holding hands through Laurin's cancer treatments to walking down the aisle together, the couple had a whirlwind romance in the short time that they were together. And while their love story came to an end rather abruptly, Michael has a million cherished memories with his beloved and it is in them and their mutual love for travel that he finds solace these days. The grieving husband recently took to shared their story with Love What Matters and it is the most moving thing you'll read today.

"I started talking to Laurin on March 24, 2015, after finding her on the dating website Plenty of Fish. She had a picture on there where she was wearing pink boxing gloves and was bald from her first bout with cancer. I initially scrolled past her but kept coming back to her. I was amazed at her bravery to put herself out there like that, and after a little while, decided to send her a message. We chatted throughout the day and that evening decided to talk on the phone — which went on for about 3 hours. I am not a person who normally likes to spend much time on the phone, but the conversation was so natural, we just kept talking," wrote Michael.

When the duo decided to meet up at Starbucks the next day, Laurin had no idea that Michael had something really special planned for her. "I buzzed my head that day so my hair would be shorter than hers, and we walked to a nearby bench where we talked for about an hour and a half. I explained I was recently legally separated and waiting the necessary time required for my divorce to become finalized, and she told me about her cancer journey and how she was recovering," he revealed.

Michael was utterly smitten with Laurin by that point. "I felt an incredible connection with her from that day – we seemed aligned in our values and life goals, and I left excited to get to know her better. When I walked her back to her car, I decided to be a gentleman and not go for a kiss the first night, which later I found out she took as me not being interested in her," he wrote. Laurin decided to take matters into her own hands and when he volunteered to help her move into her sister's house 2 days later, she showed him that she was very interested in him. "When I arrived at her house, she pushed me against the wall for our first kiss to thank me."

The couple spent almost every minute together from that day and eventually moved in together. Everything seemed to be going right in their lives as they were informed soon after that Laurin was free and clear from cancer. "Over the next few years, we had countless adventures, from touring wine country to hot air balloon rides, indoor skydiving, all-inclusive resorts in Cancun, and 7-day cruises. I knew I wanted Laurin to be my wife but didn’t know how I wanted to propose," Michael wrote.

He eventually came up with the perfect plan and decided to pop the question during a trip to the Niagra Falls. Recounting the special experience, he wrote, "We were walking in front of the falls where I dropped to one knee and asked Laurin, ‘Can we keep the party going?’ She squealed with delight. I don’t think she was able to say anything comprehensible for about 10 minutes. We turned off our phones before we got to Canada, and had decided to not use them at all while we were there, so we spent the evening and next morning just enjoying each other’s company before we came back and started telling everyone!"

However, tragedy struck soon after when just months after getting engaged, Laurin was diagnosed with cancer yet again. "We were told that the cancer had metastasized into her bones, lungs, and liver. Hearing this made me feel very useless, I am used to always being able to have some control over a situation. But I was 100% committed to being by her side as she started her second round against this dreaded disease. I wanted to be in her corner and help in every way I could," Michael wrote. Laurin, who'd lost both of her parents to stage 4 cancer, knew her odds and looked at her beloved with tears in her eyes.

"Are we still going to get married?" she asked. "She was not asking me this thinking I was going to change my mind but was wanting to protect me from the possible extreme costs of treatment.
'Of course, we are,' I told her. 'It just means we have more to figure out,'" Michael revealed. The couple got married on their 3-year-anniversary and Laurin looked incredible on the big day. "She was absolutely stunning as she walked down the aisle. I could not take my eyes off of her the entire ceremony. We kept our eyes locked, smiled, laughed and enjoyed the moment to its fullest! I felt like the luckiest person in the world," wrote Michael.

Since treatments were not helping, Laurin and Michael decided to give them up and enjoy the rest of their time together. However, their plans to go on a 2-week trip was left unfulfilled when Laurin called Michael one day and told him that she wasn't feeling well. "She was so uncomfortable, we had a hospice nurse meet us at the house when we got home. She checked all of Laurin’s vitals and said everything seemed fine. Her pain got worse and worse and the hospice nurse came back a few hours later, took her vitals again, and told me we were losing her," Michael wrote.

"We knew time was short, but we thought we had months, not hours. Laurin could not get comfortable anywhere. I spent the evening trying to help as much as I could – we kept giving her morphine every 15 minutes which did not even seem to help. I eventually picked her up and carried her to our bed. Within minutes, she had passed away," he revealed. Looking back at his time with Laurin, Michael is grateful. "I have a huge hole in my heart in which I fear will never be filled. But I have so many amazing memories of our time together... 'Til we meet again, my love," he concluded.