The donation came with a note commending 6-year-olds' Ayaan and Mikaeel from London for their efforts. 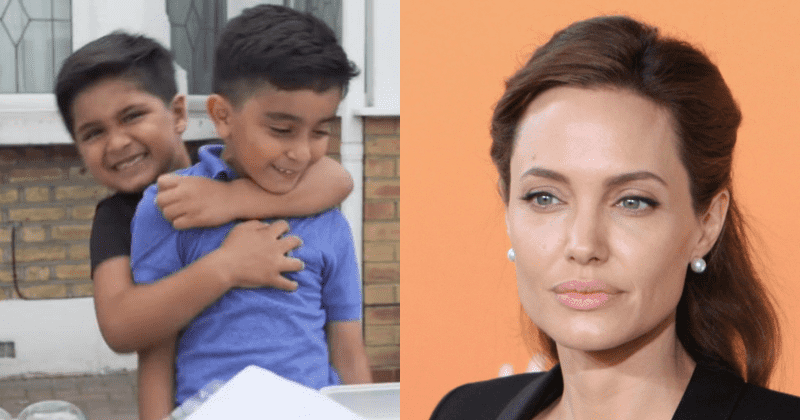 Two little boys in the UK, popularly known as the 'Lemonaid Boys' for collecting money through their lemonade stand to help the humanitarian crisis in Yemen, received quite a surprise recently. Actress Angelina Jolie made a rather generous donation to the boys' cause. Ayaan Moosa and Mikaeel Ishaaq started collecting money for the cause of the war-torn country when they saw videos of Yemen over the summer and said they wanted to help. Their respective parents gave them the idea to set up a lemonade stand that would serve the fresh juice for $3. Soon word of the 6-year-old boys' efforts got out. Jolie sent a note along with the donation which read, "Dear Ayaan and Mikaeel, Thank you for what you and your friends are doing to help children in Yemen."

The signed note from the actress further stated, "I'm sorry I'm not able to buy a lemonade from you, but I'd still like to make a donation to your stand." In a video message posted on Instagram, the boys thanked Jolie "for donating to our cause. It's really helped us raise more money and awareness." They also asked Jolie to feel free to buy a fresh glass of lemonade whenever she was in the UK. A report in PEOPLE stated that Jolie surely intends to visit the lemonade stand of the boys next time she was in their country. Speaking with NBC, Moosa said about Yemen, "They have nothing, like, the things you need to survive. They have no water, food, oil. And we have all of those things and that's why we help them." The exact amount of Jolie's donation is not known yet.

The boys' parents also set up a page for the fundraiser which read, "This page has been set up to support the efforts of these two amazing 6-year-old boys who now plan to continue fundraising for Yemen and other children who are in dire need of humanitarian assistance. We plan on selling many many more glasses of lemonade to achieve our next target!" while adding that it is supporting a charity called One Nation through the fundraiser. The page stated it had collected over 60,000 pounds (around $77,000). One Nation is a UK-based relief and development charity. It also has a "Yemen Appeal'" where they have asked people to make various sums of donations for various categories such as food packs to monthly expenditures for orphanage sponsorships.

It added, "Right now, millions of people in Yemen are on the verge of starvation. Deadly clashes have left tens of thousand’s dead and even more displaced. A famine described as the worst the world has seen in 100 years, looms over a country torn apart by war. Over 80% of the population are struggling to find enough food and water to survive each day. More than 600 medical facilities have closed meaning there is little or no treatment available for those who have injuries or are malnourished. The situation is incredibly bleak and without essential aid, it will only get worse. Please support One Nation to aid these people who have suffered in a way most can only imagine. Donate today and help us provide essential food packs, vital water supplies and critical medical care."

The crisis in #Yemen – the world’s worst humanitarian disaster – is getting worse by the day pushing many more people into acute hunger.

The #YemenCrisis needs the world’s attention.

Jolie is UNHCR's Special Envoy since April 2012 and the star "focuses on major crises that result in mass population displacements, undertaking advocacy and representing UNHCR and the High Commissioner at the diplomatic level." The UNHCR's page further reads, "She also engages with decision-makers on global displacement issues. Through this work, she has helped contribute to the vital process of finding solutions for people forced to flee their homes."