The event was held at the Teatro Regio di Parma with Bocelli taking the lead on vocals with an accoustic guitar while his daughter harmonized. 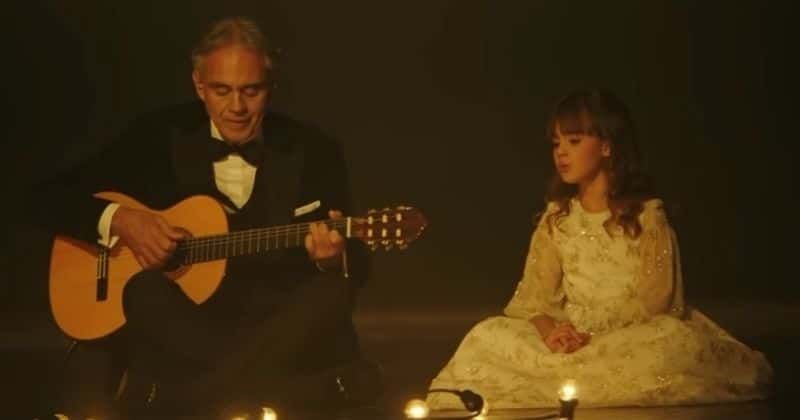 For many opera lovers in the world, Andrea Bocelli is a legend. During the pandemic, he's been a source of comfort to many living through this difficult time. According to The Pioneer Woman, Bocelli performed a prayer for the world on Easter Sunday taking the stage at Duomo Cathedral. Nearly eight months later, and with the Christmas festivities approaching, Bocelli with his eight-year-old daughter Virginia, has provided some much-needed cheer once again. Bocelli hosted a special concert event titled "Believe in Christmas" which was live-streamed from the Teatro Regio di Parma in Parma, Italy.

Of the many hits he performed, a powerful performance of "Hallelujah" stands out. According to him, the live event was a way to extend his love to all those left in the wake of the pandemic. The father-daughter duo sat on stage surrounded by a string of lights as they sang together. While Bocelli handled the lead vocals and played the acoustic guitar, his daughter Virginia harmonized alongside him. Consequence of Sound reports that the performance was "purely heartwarming" adding that they sound lovely together. Taking about what pushed him to organize the special Christmas concert, the 62-year-old took to Instagram and shared his thoughts. In the photo, we can see Bocelli and his daughter, walking towards the stage in an empty theatre.

"A magical place where humankind tell their story and put their values on the stage: there is no better place than the theater to experience Christmas together, along with everything it brings, from deep, sacred aspects to those that awaken the privilege of the childish naivety we once had," he wrote. "To 'Believe in Christmas' means to believe in the miracle of life and the love that protects it. The songs I will sing (along with some amazing guests, the choir and the orchestra, and with the invaluable assistance of Franco Dragone, who will imbue every note with pure theatrical enchantment) serve to underline one thing: life triumphs. It’s my way of embracing you, one by one, and wishing you, once more, 'Merry Christmas'. During the concert, he also performed songs from his new album, Believe, along with some classics like "White Christmas" and "Amazing Grace." The event, held on Saturday, saw Bocelli team up with Franco Dragone, the creative director of Cirque Du Soleil.

This is the second time he has performed in an empty auditorium, the first time being in April at the Duomo Cathedral in Milan, a video of which has been viewed over 41 million times so far. Speaking to Express, about the performance, he said: "It was a moment of great emotion and regeneration. Music is an expression of the sacred, a readily available bridge across which faith can be revealed to us beyond the veil of our noisy, everyday lives." He also shared a few thoughts about his new album released last month, which he says is "dear" to his heart. "The fruit of a long internal journey even more so than an external, artistic one. It’s a project with a purpose to put into words the musical dimension of spirituality by offering music that – at least for our intentions – can bring peace and harmony to those who listen to it."

You can watch the father-daughter performance of "Hallelujah" here: