Sweet little Wyatt was born via surrogate in April. 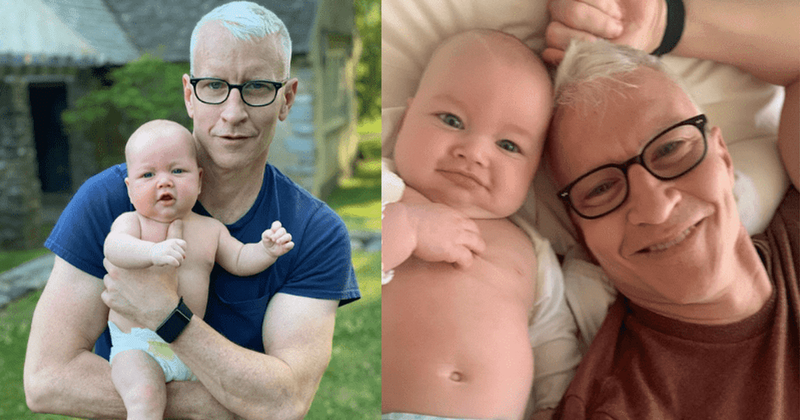 CNN anchor Anderson Cooper's 6-month-old son has won the title of PEOPLE's Cutest Baby Alive! Baby Wyatt is taking over the crown from his playdate companion, Benjamin Allen who won the title last year. Benjamin, is the son of talk show host Andy Cohen, who also happens to be best friends with Cooper.

Back in June, Andy Cohen had Cooper on his late-night show Watch What Happens Live with Andy Cohen where they set up a virtual meet up for their sons. According to CNN, Cohen told Anderson that his then newborn baby looks like a miniature version of him (so that would be a mini Cooper). The dads often holiday together so Cohen let his son know that this will continue. "We're going to travel together," the Bravo host and executive told Benjamin. "And if you like him half as much as I like his daddy, you're going to be great friends." It's clear both the dads love fatherhood and keeping friends just as close!

53-year-old Cooper previously confessed to PEOPLE that the experience of being a dad was something he never thought he'd have. "When I was 12 years old and knew I was gay and thought about my life, it always upset me because I thought, 'I will never be able to have a kid,'" he shared in PEOPLE's cover story for its first-ever Pride issue. "This is a dream come true. It feels like my life has actually begun," Cooper continued. "And I sort of wonder, what was I waiting for? This is a new level of love. It’s unlike anything I’ve experienced, and yet it’s also very familiar and incredibly special and intimate. It’s really extraordinary."

Cooper first announced the news of his baby boy on Instagram in May. He penned an emotional tribute, writing:  I want to share with you some joyful news. On Monday, I became a father. This is Wyatt Cooper. He is three days old. He is named after my father, who died when I was ten. I hope I can be as good a dad as he was. My son's middle name is Morgan. It's a family name on my mom's side. I know my mom and dad liked the name morgan because I recently found a list they made 52 years ago when they were trying to think of names for me. Wyatt Morgan Cooper. My son. He was 7.2 lbs at birth, and he is sweet, and soft, and healthy and I am beyond happy. As a gay kid, I never thought it would be possible to have a child, and I’m grateful for all those who have paved the way, and for the doctors and nurses and everyone involved in my son's birth. Most of all, I am grateful to a remarkable surrogate who carried Wyatt, and watched over him lovingly, and tenderly, and gave birth to him. It is an extraordinary blessing - what she, and all surrogates give to families who cant have children. My surrogate has a beautiful family of her own, a wonderfully supportive husband, and kids, and I am incredibly thankful for all the support they have given Wyatt and me. My family is blessed to have this family in our lives I do wish my mom and dad and my brother, Carter, were alive to meet Wyatt, but I like to believe they can see him. I imagine them all together, arms around each other, smiling and laughing, happy to know that their love is alive in me and in Wyatt, and that our family continues.

Cooper posted a recent update on baby Wyatt saying that he now has begun teething and loves being read to! In his interview with PEOPLE he admitted, "There's something about having a child that makes you feel connected to what is happening and you want to make sure that the world this child is growing up in is a better one. You suddenly worry much more about the future of all of us," he said at the time. Although Cooper admitted that he'd become "more tired than I've ever been" since becoming a dad, he said he "wouldn’t change it for the world." The doting dad also revealed that seeing his baby boy often even moves him to tears. "I cry at things I never cried at before," he said. "And Benjamin, I’ve never seen him cry, but I couldn’t believe how weepy he gets with Wyatt. I find myself being overwhelmed with emotion, and it’s a lovely thing."

So happy for Anderson