Rescued animals at the Safe in Austin in Texas have horrible histories of abuse and neglect. Yet forming bonds with them has been a therapeutic experience for many. 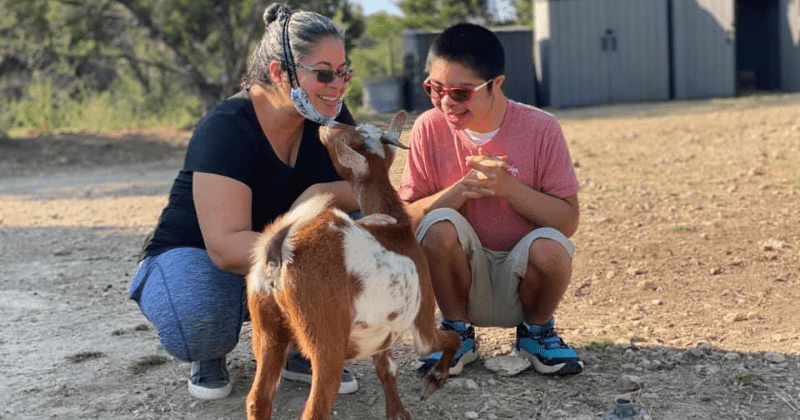 An animal farm in Austin, Texas has been connecting formerly abused animals with children with special needs, thereby setting an example of the love and bond between man and animal. It all started when one of the farm's owners, Jamie Wallace-Griner, 40, brought home a service dog named Angel as a support for her autistic son, Jackson. She saw the positive effect Angel had on her son almost immediately. Wallace-Griner further mentioned on the farm's website, "...when Angel joined our family it became insanely clear how the love of an animal can be literally, miraculous! Angel gave my son confidence and strength beyond anything I was capable of doing as his mother. She provided protection from his fears, understanding of his thoughts, and power over his disabilities."

And now, the farm was just a way of trying to continue the journey that started with Angel. This farm has already helped plenty of people. Among them is Celine Wulms, mother to a child with special needs named Harper, also from Austin, reports oltnews.com. Harper met a rescued turkey named Priscilla who was born with a “lucky claw.” Harper immediately took to Pricilla, according to Wulms. “It was such a coincidence. Meeting Priscilla was a gift,” she said while adding that the bond was due to the similarity between the two. Another child who found solace at the farm was Gracelyn Woods, a 9-year-old girl who moved to Austin in June with her family. She was grappling with the transition of the move and the pandemic did not make things easier for her.

Her mother, Jess Woods said,  “The ranch has helped our little one embrace the change. We kept coming back and our daughter started to come out of her shell. Life returned to her." Gracelyn and her mother go weekly to the farm. As word got out about the sanctuary, the flow of people just became bigger and the bond between visitors and the animals on the farm grew stronger. The time came to move to a bigger place. "I realized it was time to open up in a way that would help more people and more animals,” said Wallace-Griner. She and her husband, a lawyer named David Griner, purchased a 10-acre ranch in 2014 with the aim to move the family there. This included their own human family of five and their animal family.

Their animal family included as many as “20 dogs, 14 cats, eight horses, 32 goats, four rabbits, three turtles, one parrot, four turkeys, lots of chickens, 18 pigs, and four cows,” said Wallace-Griner. Every animal on their farm has a horrid story of abuse. According to the farm's website, Peter, a 250-pound potbellied pig was "once thrown away and left for dead." A goat named Sapphire "was rescued from an animal hoarding situation" after she was "bred with a goat three times her size." Wallace-Griner said that she "slept on the porch for two weeks with her in order to be there for the extremely traumatic birth of her really big triplets." Sapphire now has a family of two other goats - Curly and Ruby. Then they have Duchess, "our sweet momma who was rescued from a dogfighting ring where she was used as a breeder dog."

For a number of years, the money for looking after the animals came from the owners' own pockets, the oltnews.com report highlighted. However, as the cost increased, they decided to make their farm into a nonprofit to accept donations. This was in 2018 and the going has been good so far. The visiting families can contribute $25 but there is no hard and fast rule that they should. People can also visit for free. “We don’t care about the choices you’ve made in the past, how you look, who you like or what you eat. We’re focusing on no judgment at all,” said Wallace-Griner. A number of the farm's old visitors like Wulms have even become weekend volunteers, giving people a tour of the place.

Others like Skylar Carson, 28, who also started work as a volunteer five days a week.“I have a history of childhood trauma,” she said. Safe in Austin has played a crucial role in her healing, she added.