New York Town Installs 2,978 Flags To Honor Brave Firefighters & Others Who Died In 9/11

The installation was the idea of the vice-president of a fire company in Stanford town. 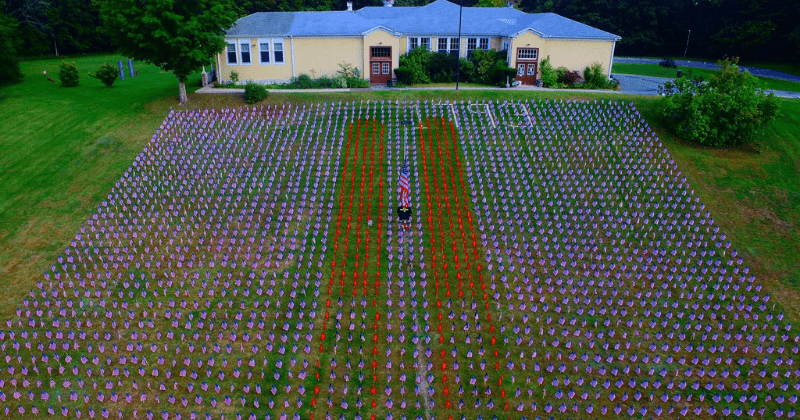 In order to commemorate the brave 343 firefighters who died during the 9/11 attack as well as police personnel and civilians who perished that day, a small town in New York has come up with a unique tribute. As many as 2,978 flags were pressed to the ground just outside the Town Hall of Stanford and arranged in a rectangular shape, reports the Poughkeepsie Journal. At first glance, one will probably first notice the majority of American flags in the design. Right in the middle are red flags that represent each of the 343 fallen firefighters in the design of the twin towers. If you look closer, there are many as 71 American flags tagged with a blue ribbon at the base of the design. These represent the police officers and one Port Authority police dog killed in action that fateful day.

We will #neverforget those lives lost and the brave men and women who so valiantly and selflessly sacrificed to save so many. The Stanford Fire Company on Stanford Town Hall Hill in Dutchess County. Photo Credit: Bill Beale pic.twitter.com/hHswzoMhPB

The rest of the American flags represent every civilian who died in the terror attacks. The person who installed the memorial was Edward Zick, the vice-president of Stanford Fire Company. Besides the people who died directly due to attacks, the installation also has something to say about those who died due to injuries and ailments resulting from the attack. In between the red flags is an American flag on a post with a firefighter's helmet and a jacket beneath it. The jacket has the number 39 on it to represent one of the town's own - a man from the local fire department named Dennis Gilhooly, who was at the World Trade Center in Manhattan that day. He died due to health issues in December.

"One of our firefighters that was a lieutenant in the fire company died of injuries related to 9/11, so we felt like we should have something special, even though he wasn't part of the 2,978… in our heart, we felt something should be dedicated to him. (Friday) night it came together, I can truthfully say that there wasn't a dry eye when it was done," said Zick. Speaking about how he got the idea for the installation, Zick said he was driving through Massachusetts, where he saw flags erected to support of local fire departments. It then struck him that this could be taken further to remember the people who died in the 2001 attacks. He added, "I said this is going to be a lot of work but I think it would be really neat if we did this at Town Hall… by the end of the meeting there was no way we weren't going to do this."

This really is phenomenal. Thanks for sharing.

He said one of the reasons he wanted to do this was to make the younger generation realize the kind of sacrifices that people before them took, "Part of it was we wanted to make a history lesson for the kids. it's easy to say we're never going to forget… but kids nowadays don't fully understand," Zick added. The display will remain at Town Hall until September 19. While it was mostly the fire department staff who installed the flags, members of the community also came out to help press the flags. Many others were also seen serving refreshments to those working. Others provided meals for volunteers at the firehouse when they finished. "We will never forget our fallen firefighter brothers or the people that were killed in 9/11. It changed our history, it changed how we function in the world because of that day," Zick said.

He added, "A lot of these people happened to be in the wrong place at the time, a lot of these firefighters didn't know when they ran into that building that it was going to collapse, and we can't let that escape."

Marc Molinaro, the Dutchess County Executive commended the fire department for their work and posted pictures of the same on his own Twitter handle.