The vandalism, which devastated the parish community, took place on Tuesday morning around 10 am 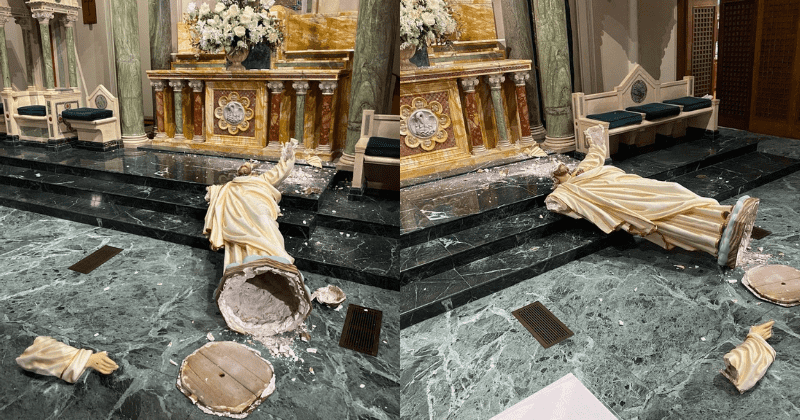 A nearly 90-year-old statue of Jesus at the St Patrick's Church in El Paso, Texas, was vandalized by an unknown man. The man was arrested and his motive for the act is yet to be ascertained. He walked into the church located in downtown El Paso on Tuesday and destroyed the statue called the "Sacred Heart of Jesus", according to a KVIA report. Pictures and information shared by the church with the media and the public about the incident highlighted that a large part of the bust of the statue was broken as was the right arm and a section of the left arm. The statue, which stood near the altar,  was pushed to the ground, causing it to be dislodged from the base.  The accused is presently detained by the El Paso Police Department.

“This statue is one of my favorite representations of Jesus – his arms open wide in welcome, his heart aflame with love for us. I would often take inspiration from this image as I prepared for Mass,” said Bishop Mark Seitz while adding that he was saddened by the destruction of the statue. He said he did not know the man but believes he must be "disturbed". “He certainly must be a person who is greatly disturbed to have attacked this peaceful place in our city and this image of the King of Peace,” Seitz said. He further said that he hoped that the vandal “receives the help he needs” and that “he will be in my prayers.”

The Diocese of El Paso released a statement about the incident on their Facebook page which read, "We are saddened to announce the vandalism at St. Patrick Cathedral earlier today.  The Cathedral was vandalized this morning at around 10:00 am."

St Joseph Church, Matlock 🇬🇧 are praying for the community of St. Patrick Cathedral in the Diocese of El Paso.

The Cathedral was vandalized on 15th Sept at around 10:00am. A 90-year-old statue of the Sacred Heart of Jesus, which was located behind the main altar was pulled down. pic.twitter.com/FNol61HSmN

It added, "A suspect came into the sanctuary at St. Patrick Cathedral and destroyed" the statue "which was located in the center behind the main altar of the church." At the time of the attack, "the church was open and available for prayer."  Father Trini Fuentes, The Rector of St. Patrick Cathedral was quoted in the statement: “I am in shock and we at the Cathedral are heartbroken over such an unexpected situation.” Bishop Seitz added, “As sad as I am to see a statue attacked and destroyed, I am grateful that it was not a living person. But a statue, particularly this statue, concretizes and connects us to persons and ideals that are not visible to our eyes. They reveal to us realities that are close to us, but unseen."

Clearly, the escalation of these attacks in the US & around the world is no coincidence. I hope & pray that the culprits responsible are brought to justice & that the Church defends her places of worship & sacred art & objects from these vandals.

Speaking about the suspect, Bishop Seitz added, "At this point, we do not know anything about the person who carried out this assault. I am devastated at this irreplaceable loss as I know members of this parish community and the whole Church of El Paso will be. In this moment we will reach out in confidence to the One this statue represented and I know he will console us.”

Many believers commented with anger and sadness at the news. Sylvia M Richards, wrote on the Diocese of El Paso's post: This is so sad. Speaks volumes about what society is coming to. We MUST teach our children well. Talk about God, morals, respect, and STOP voting for abortionists. STOP putting evil in power. Prayers for healing for our leaders, our spirits, and each other in Jesus name.(sic)

Oh no. I’m in Israel but this is my home. My childhood church school. All the weddings and funerals. I am crushed. 😔

Another believer named Gerardo Cvj wrote: It is incomprehensible how an individual or individuals can succumb to such evil doings. These Animals have and show Zero respect to God and the Church. They need to be prosecuted to the complete letter of the law. This is a perfect example of what is transpiring across this Once Great Country of ours. Hate and sensless crimes are being created by individuals that have No respect for humanity and or God!!! (sic)