Jim Annis personally hand-makes every single one of the nearly 300 wooden toys he donates to the Salvation Army. 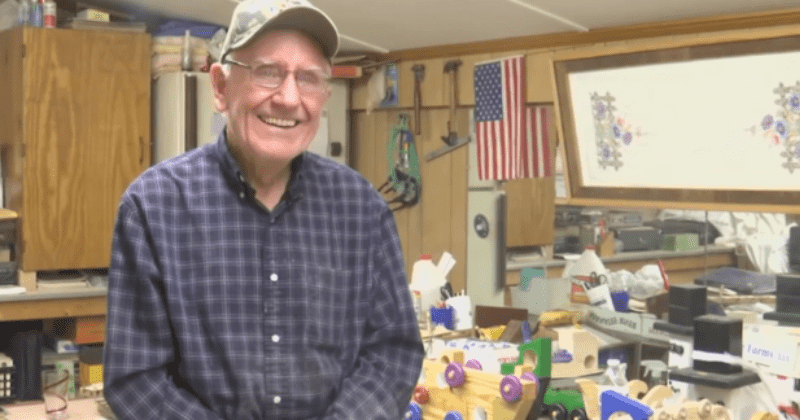 While most of us are improving upon our shopping game and getting ready for a gift-laden Christmas, there are families all over struggling so bad they cannot even afford a single one. These unfortunate homes will celebrate their Christmas with stark reminders that it is just another day in their impoverished life. One old veteran decided that he would do something each year to try and help these families, and has done the most amazing thing for the last 50 years now. According to ABC11, Jim Annis of North Carolina spends every Christmas season meticulously hand-crafting beautiful wooden toys for children from low-income families.

Since the 1970s, #USArmy veteran Jim Annis has been a real-life Santa to children in his community. Each year he makes 250 wooden toys to hand out to kids at a local @salvationarmy.

Thank you, Jim, we salute you!

This is a proud tradition that Jim has kept passionately going for half a century now. Each day, he spends many hours toiling hard in his home workshop. He does the carving, sculpting, and sanding the blocks of wood into colorful toys all by himself, and sends them to the local children in his community. "When the Salvation Army gives out the food and clothes to people in this area, I give out my toys," Annis said. The Salvation Army is a Protestant denomination of the Christian Church with over 1.6 million members in 109 countries. "It feels like you're sort of forgotten about at Christmas time," he added.

Annis sometimes accepts some wood scrap donations from locals, who also want to help him help others. But aside from that, he pays for everything else out of his own pocket. On average, he spends somewhere around $1,000 for each year's batch of wooden toys. However, Annis said that it was never about the money to him. His own childhood memories include waking up on Christmas morning without any presents to open under the tree.  "My dad, he worked, but didn't make a lot of money," Annis explained. "It's hard to have a big Christmas with five kids." It is quite clear that he doesn't want these children from low-income families to feel uncared for during the holiday time.

Jim Annis is an 80 year old army veteran who spends many days creating wooden toys in his Sanford workshop for kids in need. He donates hundreds of toys each year to the Salvation Army of Lee County and he pays for it all. We hear from him tonight on @ABC11_WTVD. pic.twitter.com/j6HwD4Ldnu

His amazing effort is matched only by the quality of the work he produces. Annis crafts all sorts of beautiful toys, including cars, dolls, piggy banks, tractors, and firetrucks. His 50-year-long tradition is one he hopes to keep up for as long as possible, and he has not failed to deliver so far. "I love when people ask me, how much do I get paid for making these toys," Annis said. "I tell them my pay is when I see the smile on kids' faces. I hope to be able to do this until my toes curl up." He said: "I just want to thank everybody from the bottom of my heart for your generosity. You’ve got people from California to Texas -- way out there -- I never dreamed would even hear about my story."

A lot of you were really moved by Jim Annis’ wooden toymaking operation. He makes toys for kids in need each Christmas. The 80 year old vet has received calls, money and supplies from people all over the country since our original story. At 10/11, I’ll share the update. Tune in. pic.twitter.com/J4mOMSkyLf

Christmas time is one of those seasons where we feel, more than ever, that it is part of our duty to give something back to society. Many people arrange for their annual donations and philanthropy to take place around this year, and for good reason. There are families that go through hard times throughout the entire year, and if it's ever a time when they receive timely help from strangers, it might as well be during the cold winter. Thanks to the great and consistent deeds that people like Jim Annis do each year, there is no shortage of inspiration and encouragement during these times. While we plan ahead for a bright and lovely Christmas week and New Year's, it would truly benefit our community and nation that we spare a thought, dollar, or deed for those truly in need.

What a festive, heart-warming example of how our members are #StillServing. Jim Annis is a Life member of VFW Post 5631. https://t.co/9o2Wzys6fR pic.twitter.com/xTJb8GVMIx