People who read the letter said they were both "proud" and "scared" of the girl. 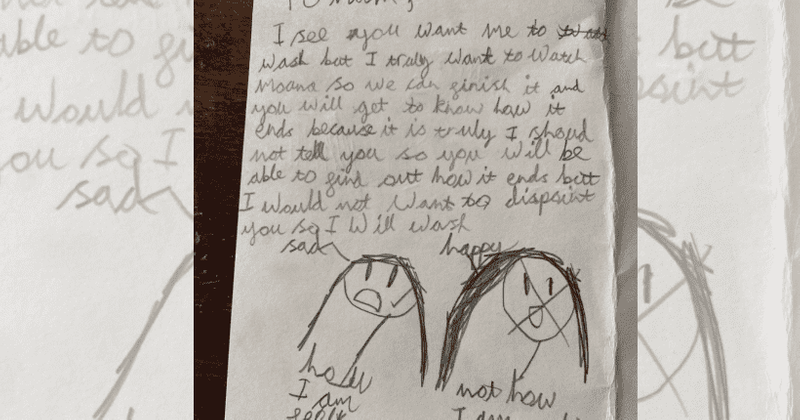 When kids don't like something their parents tell them or force them to do, some cry. Some throw angry tantrums. There are those who sit in a corner and pout all day long. But one girl wrote a passive-aggressive letter to her mom and the internet just found their little angry hero. The child's mother put up a picture of the letter, on Reddit and the post just blew up. The child scrawled the words with a pencil and even added drawings at the end of how she looked when she was forced to do something by her mother. In this case, she was asked to wash up when she really wanted to just sit and watch television. The letter read: To Mum, I see you want me to wash but I truly want to watch Moana so we can finish it and you will get to know how it ends because it is truly[sic] I should not tell you so you will be able to find out how it ends but I would not want to dispoint[sic] you so I will wash.

She added: Sad 😢 (tick mark) How I am feeling Happy 😁 (x) Not how I am feeling. The mother said her child would always give her "passive aggressive cards" whenever she "disagreed with a parental decision." In later comments, the mother highlighted the girl was just 7 years old. Many commentators stated they would be scared when the girl grew up. One account with the name rufnek2kx wrote: That's top level emotional manipulation for a child. I'd be proud and scared. Another named ClassroomPast6178 added this fictional future headline in the news: Or a future BBC 9 O’clock News story ending:…and there were no survivors. An eight year old girl is currently in police custody.

Some recalled their own children doing something similar. One parent named HotPinkLollyWimple wrote: My daughter once wrote her name in the dust on the cooker hood when she was probably about 6. She got told off and she cleaned it up. A little while later, we found her brother’s name in the dust. Clever girl! There were those who simply couldn't get enough of the letter and commended the girl and her parents. IndecentLouie stated:  Seems like you're being great parents since your daughter knows she can express herself this way. Keep up the good work OP. TehDragonGuy added in the same vein: That's ridiculously good for year 2, I'm impressed. Can read that better than things written by a lot of people I'm at uni with!

Others said the girl had a bright future ahead of her. One of them, 1balletlane stated: Wow! That's awesome. Future passive aggressive note writing hero in training! Another, MegaUltraHornDog wrote: She will truly be a formidable house mate come university. Some even compared the little girl to the "Disaster Girl" meme. The meme is a picture of a girl named Zoë Roth, who is now 21, looking back while smirking as fires burn a house in front of her. She became an internet sensation and the picture, one of the most famous and shared memes.