These seven besties who have been friends for 20 years found the stunning three-and-a-half-story, 7,500-square foot home in the Chinese countryside 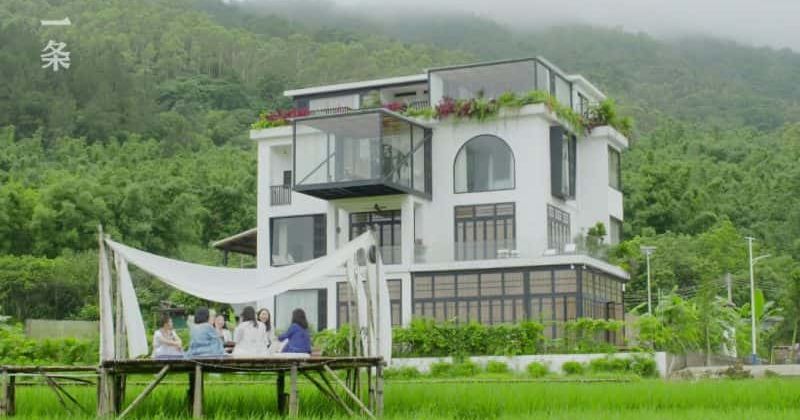 Who wouldn't love the Golden Girls' approach to aging, retiring, and living together with your besties in a house? A group of girlfriends from China are going viral for being the real-life Golden Girls. The seven besties found a 7,500-square foot home in the Chinese countryside and decided to renovate it so that they can all live together. They purchased a house together for their retirement back in 2008 and are now living their best lives! According to NetShark they pooled in around $584,000 to buy and completely remodeled the dilapidated redbrick house in suburban Guangzhou, Guangdong province and have turned it into a light-filled, glass-coated gem.

The stunning three-and-a-half story home is set in the hills and partly surrounded by paddy fields. With large, open common spaces, there are also bedrooms upstairs for each of the women so everyone has some private space. "[At first] it was just a joke," the group of women says in a video posted on YouTube from media startup Yitiao featuring their gorgeous mansion. "We [said that we] would get together when we were 60 and live the retired life together."

And what a place to retire in! The space houses huge tatami mats, furniture sourced from India and Morocco, and a long dining table for group meals. The sweetest part is that the group of ladies, who are all tea lovers, also built a tea pavilion in the middle of a paddy field. This room is connected to their lot through a bamboo walkway! Oh, and they also have a swimming pool! Their lovely home is pretty secluded, but they can also reach the nearest town in about an hour. "We’ll probably cook together, barbecue in the fields, sing and collect food in the village," one of the women said. They plan on inculcating life skills that they can use to contribute to their retirement household.

"We’ll probably cook together, barbecue in the fields, sing and collect food in the village," the friends say in the video, according to The New York Post. "We joke that each of us should practice one skill so that we won’t be lonely and fight with each other 10 years later … Some can cook beautiful food, some know traditional Chinese medicine, some play instruments and some grow vegetables."

"Ten or 15 years later our children might have grown up," the friends add, "so we also hope that we can still be together in the next years." These women are truly #BestieGoals.

Another group of besties from Texas is also quite inspiring. They built "Bestie Row" so they could all live near each other!  The group partnered with Austin-based architect Matt Garcia to make a row of four, small energy-efficient cabins alongside the Llano River. "We all met about 20 years ago in Austin, Texas, and we've been close ever since," resident Jodi Zipp told BuzzFeed Life.

Zipp and her husband, Fred, own one of the tiny houses. "We loved having people around to do stuff with when we dormed in college," Zipp said. Their houses are just about 350 square feet. Construction began in summer 2011, and the whole setup was finished by July 2012 and cost each couple $200,000.   "We love cooking all together," Zipp said. "And we have a big TV so that everyone can watch football. All of our kids will come over to spend Thanksgiving and New Year's with us. I think our kids look forward to bringing their kids here someday." What's cool is that when the couples are away, they rent the property out to others, according to Country Living.

Would you like to hang out at the cute, little Bestie Row compound?

These BFFs built a tiny house neighborhood so they could all live right next to each other: http://t.co/SKYAazlPHq pic.twitter.com/sXEOMHo7Ts