6-Year-Old With Leukemia Becomes The Youngest UPS Driver, Delivers Flowers To His Mom

Mateo Toscano always wanted to be a UPS deliveryman, and as part of the Make-A-Wish Foundation, his dream finally came true. 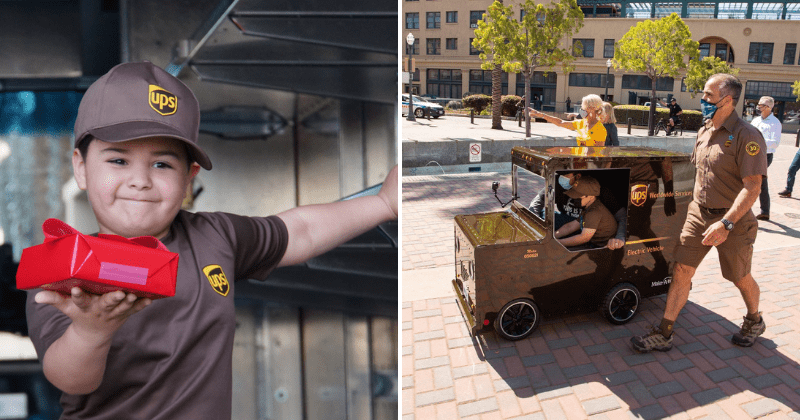 At the young age of six, Mateo Toscano from Stockton, California has become the youngest UPS driver in the world. The young boy was diagnosed with leukemia in 2017. As part of the Make-A-Wish Foundation, he finally got to live his dream of becoming a UPS driver for a day. Having grown up watching delivery drivers come by with packages, Mateo had been filled with joy. He wanted to bring joy to others by delivering packages himself and after a long wait due to the pandemic, he finally got to do just that. Finally, on May 6 he got to deliver packages and even got his own uniform and truck.

SPECIAL DELIVERY 📦🌟We have an action-packed day tom. 5/6, as @MakeAWishCANV wish kid Mateo’s wish to become a delivery person comes true! Tune in to our Facebook & IG stories as we go along for the ride as #MateoDeliversHope! Create hope: https://t.co/RnahjHRExa. @UPS, @UPsers pic.twitter.com/kt2WxL2GS4

Mateo started off his day with quick instructions from the Stockton Police Department so that he could acquire a driver’s license for the day. He then changed into his UPS deliveryman uniform and got into his miniature delivery truck which even came with decals, and boxes ready for distribution, to carry out the orders for the day. “The truck is a reality,” Mateo’s mom, Cynthia Toscano told CBC Sacramento. “He’s delivering stuff.” He was tasked with delivering plenty of packages downtown for the day. He even had his own route to follow.

Mateo’s Wish = HOPE delivered ☑️! Our 💙s are full after an incredible wish for @makeawishcanv wish kid Mateo came true in Stockton, CA! A huge thanks to all who made this life-changing wish possible! ⭐️ @macys @UPS @UPSers @StocktonPolice @VisitStockton #MateoDeliversHope pic.twitter.com/EUQV5AwTYx

Mateo was accompanied by an adult UPS driver who helped him deliver packages. He had multiple stops that included delivery to various Stockton city officials, local police, and others. He even had a delivery at City Hall, where he even got to sit in the council chambers with the mayor of Stockton, Kevin Lincoln.“He’s an inspiration for everyone in general,” Lincoln said of the boy. “There’s hope and your dreams do come true.” He dedicated the whole day to Mateo and even proclaimed it #MateoDeliversHope Day. "I was busy as a bee," he told Good Morning America. He added, "I really liked it. It was so cool."

Mateo was only happy to be able to deliver packages and do his bit even if it was just for a day. In the middle of the day, the little man even took a lunch break. Before the day came to an end, there was a special surprise he had planned thoughtfully for his mother and grandmother. He had picked out Mother's Day gifts for them, which included candles, bath towels, and flowers. Mateo's doctors had advised his family that there shouldn't be any cut flowers, wreaths, or trees in the house during his treatment. So when they received flowers from Mateo they were pleasantly surprised. “It’s a nice conclusion to his journey,” Cynthia said.

A 6-year-old is now the world's youngest UPS driver. https://t.co/uvjy7CsJsI

"My mom and I were both so touched by his Mother's Day gifts to us, and were very surprised by the pretty flowers!" she continued. "The flowers were a very nice way to signal the end of a very, very dark period. Hopefully, the brighter times are here to stay." With the delivery of his Mother's Day presents, Mateo's shift came to an end. Recollecting the memories of the day, Mateo said it was "really exciting." He was encouraged and supported by the community as much he was by his family. Jennifer Stolo, president and CEO of Make-A-Wish Northeastern and Central California & Northern Nevada, in a statement, said, "When Mateo's wish came true, he did more than deliver packages, he delivered hope to the entire Stockton community and beyond ... and that's the incredible power of a wish."

The little boy has been doing a lot to keep his community's spirit up despite the difficult circumstances. Over Christmas, as he waited for his Make-A-Wish request to come to fruition, he took on the role of Santa’s mailman as part of Macy’s "Believe" campaign, reported CBS Sacramento. Children and adults alike can write letters to Santa and in exchange, the company donates money to the Make-A-Wish foundation. Before getting to be a UPS deliveryman, he gained experience as Santa's mailman.

MATEO'S MISSION: A Stockton 5-year-old has so much energy and spirit.

Mateo has battled leukemia the last 4 years, & while he waits for his Make-a-Wish request of being a mailman to come true, he has the chance to be Santa's mailman this season. pic.twitter.com/67iGyEWyjC