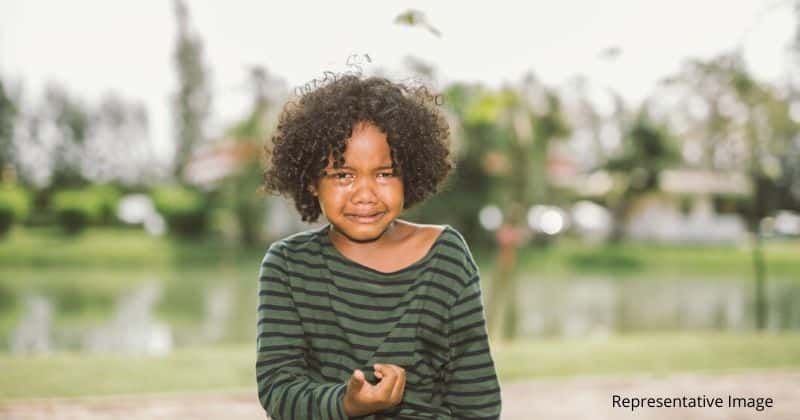 A heartless mother in New York threw her 6-year-old daughter from her car at a busy intersection along with her belongings. The woman's boyfriend who was also in the car then called up the girl's father and told him to pick her up and that she was "crying like a little b***h". The two adults drove off leaving the child behind. Court documents state that the girl was seen picking up her belongings from the street, which her cruel mother had packed in a garbage bag and a black reusable sack before flinging it out of the window. Documents also revealed that the girl was heard crying in the background on the voice message that had been left for the child's father. A good samaritan found the girl roaming the streets all alone with her mask on and contacted authorities reports NY Daily News.

“Not my kid, not my problem,” boyfriend Mark Pamphile told cops.

His mom told us he was hit by a drunk driver and left with a brain injury.

6-year-old Emma was found wandering in the road by good Samaritan Mishka Peart. “How does this happen?" she said.https://t.co/4ZoE3p5dEG

The couple, Patrice Chambers, 29 and her boyfriend Mark Pamphile, 29, residents of Central Islip in Suffolk County, were caught soon after the incident and are facing child abandonment charges besides others.  6-year-old Emma was left on Monday at around 11.30 a.m. at the 140th Avenue Springfield Boulevard in Laurelton. Surveillance footage from the area, showed her "running in the street... attempting to pick up the items in the street" court documents state. "You better come get your daughter. Your daughter is in the street not sleeping nowhere. She is crying like a little b----," said Pamphile in his call the documents added. Mishka Peart found Emma wandering aimlessly at the intersection she was left at with all her belongings and took her to a park.

Mishka Peart can't fathom why the parents of a 6-year-old girl abandoned her on a Queens street with her clothing in bags.

“How does this happen?" said Peart, who found the girl and brought her to the authorities.

The parents were arrested. https://t.co/EcQiMskZLH

When Peart asked what had happened and where her parents were, Emma said, "They drove off and left me." Peart then took the child to Montbellier Park. There she found two school safety agents and told them what had happened. These agents informed the police officers in the precinct. An investigation was carried out and the couple was located a few hours later. Pamphile immediately tried to wash his hands of the incident when interrogated by the cops. "This kid is her kid. This kid is not my kid, not my problem, not my responsibility,” he told cops, according to court documents. Chambers, on the other hand, tried to wriggle out of the situation by lying about having tried to leave the girl at her father, Kermit Waton's house. Watson denied the claim.

Both look like pieces of shit. Give them jail time. And can we start giving out licenses to become parents? For fucks sake.

He also had a  doorbell video to prove that Chambers was lying adding that he had barely seen Emma since he broke up with her mother four years ago. When she was shown surveillance footage of her crime, she admitted to what she had done and said she "was frustrated". Chambers and Pamphile have also been charged with endangering the welfare of a child and reckless endangerment. They face four years in prison if convicted. The Child Welfare Services took Emma and she will be handed over to a relative.  Peart said about the incident, "How does this happen?  How is it that this woman has a daughter and leaves her like this?" When she first saw Emma, she stopped her car and motioned for her to get her clothes. "Then, she ran to the sidewalk, and she kept looking at me," she said.

Posted by Extreme Murder and Headlines on Wednesday, 20 May 2020

Peart added, "I asked her where she was going and she said, 'I don’t know.' I said, 'Where are your parents?'" Watson also said while Pamphile had texted him to inform him that he and Chambers would be coming to drop off Emma, they never showed up. Pamphile's mother said that her son was innocent and also attributed a brain injury from "multiple car crashes" of her son for his actions. "Sometimes he might be OK, sometimes he’s not. And that’s why maybe now he’s acting like that, he’s going crazy.”