The death took place in the north-eastern city of Suceava last week on Monday with a manslaughter investigation being opened against the priest who performed the baptism. 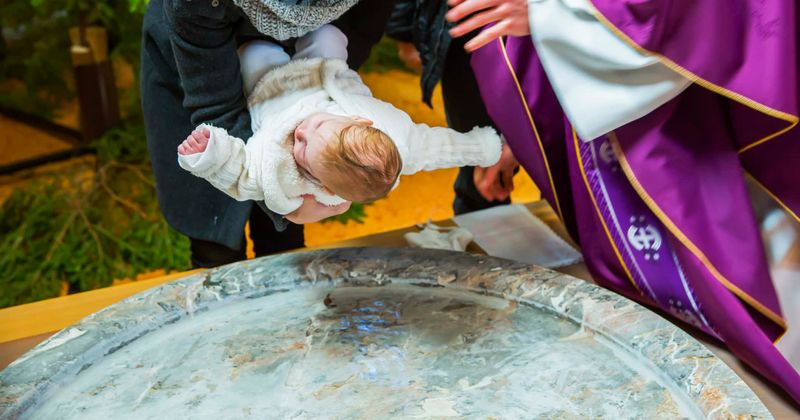 Trigger Warning: The story has details of a child's death that some readers may find disturbing

A 6-week-old baby in Romania died after inhaling water during a baptism ritual at the country's Orthodox Church, reports The Guardian. The death has sparked widespread protest calling for changes in the practice. Babies are required to be immersed three times in holy water as per the ritual with their nose being closed to prevent them from inhaling water. An online petition started on the matter has garnered some 60,000 signatures. The death took place in the north-eastern city of Suceava last week on Monday with a manslaughter investigation being opened against the priest who performed the baptism. The baby was rushed to a hospital but died a few hours later. An autopsy report found water in the child's lungs. There have been similar cases in the past due to the ritual.

The Orthodox Church faces growing pressure to change baptism rituals in Romania after a baby died following a ceremony... https://t.co/PaDPcJFufz

“The death of a newborn baby because of this practice is a huge tragedy. This risk must be ruled out for the joy of baptism to triumph,” stated the petition. The BBC reported the petition was started by a man named Vladimir Dumitru, who added that the ritual had to be regulated to prevent risking such tragic deaths. Rather than completely banning the practice, the aim was to make it more moderate. The church clergy however seems to be seriously divided on the matter. Eminence Calinic, the Archbishop of Arges, one of its most senior members, is the foremost voice supporting changes. He has conducted high-profile baptisms including that of the daughter of the former prince Nicholas of Romania. He told a local media outlet that the practice needed review.

He said, "the most appropriate decision taken to respect [Church] ordinances and carefully avoid unwanted accidents." Archibishop Calinac was also quoted as saying, "In other icons, Jesus stands in the water up to his neck, and with his head bowed he receives baptism by pouring water over the top of his head." Archbishop Calinic said that rather than immersing the babies, he would sprinkle holy water on their heads and just dip their feet. So far as adults are concerned, he said immersion in holy water was appropriate. For baptizing babies, there were other ways. But many on the other side of the debate are more belligerent and have refused any changes. Among them is the Archbishop of Tomis who said, "We will never change the ritual. The canons of this religion have been in place for over 1,000 years."

Omg this is horrific. Dunking a baby under water, that’s barbaric. Just pour a tiny bit of water on their foreheads like we do here... Heartbreaking for the poor parents

He added, "That is why we won't change. We are not intimidated." The Guardian report quoted Vasile Banescu, a church spokesperson who hinted that some changes might be in the offing. Banescu said sprinkling with water on the baby’s forehead instead of full immersion could be an option. Then again, others like Archbishop Teodosie, a leader of the Church’s traditionalist wing, reiterated that no changes would be made to the baptism of infants. As many as 80 percent of the country's population are believers of the Orthodox Church. Social media users were infuriated by the news of the infant's death. Gabrielle Diana Reiser commented on Facebook: This has nothing to do with religion and all about how the ritual is being done. As a mother this infuriates me that a childs life was lost because a priest/church thinks the only way to baptize a child is by putting their face in water!!!

I never liked the thought of putting newborns and small babies in water. They don't have the capacity to say yes or no to this religion. No to #baptizing a baby.

She added: In our church all you have to do is pour water over their head with their face UP so they cant drown. This isnt rocket science. Its simple common sense and respect to a newborn child! I am so angry that something like this is happening when it can be avoided by a SIMPLE adjustment!! Another enraged commenter, Alyssa Mason wrote: Nope I don't care what the reason putting a babies head underwater is wrong sprinkle it on their forehead by all means but don't risk babies lives for something so stupid that's just wrong and I hope those involved are held accountable.