"Take A Chance On Me," 20-Yr-Old With Autism Pens Heartfelt Plea To 'Future Employer' 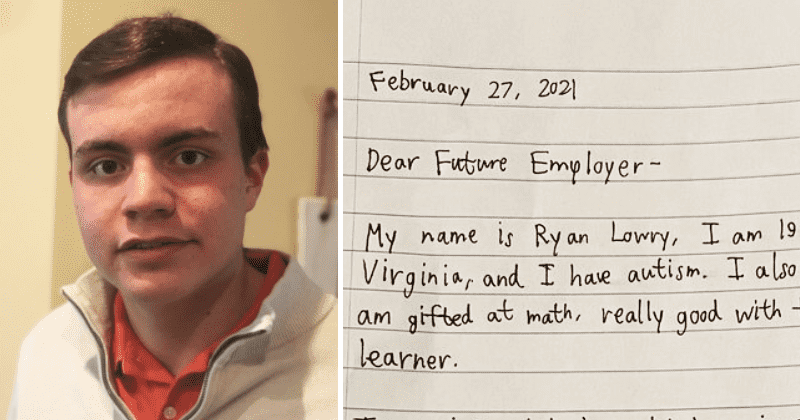 Ryan Lowry, who's autistic, is well aware of the hard realities of the job market but it didn't stop him from making a unique pitch to his "future employer." The 20-year-old soon-to-be high school graduate posted a heartfelt letter to LinkedIn asking employers to take a chance on him. Ryan Lowry dreams of a career in animation and hoped the handwritten letter could provide him an opportunity to pursue his dreams. Lowry said he might not learn the job the traditional way but added that he has his own methods of learning quickly. Lowry's post resonated with many job seekers, especially those with special needs, and highlighted the issue of employers often screening out candidates such as Lowry.

"I realize that someone like you will have to take a chance on me, I don't learn like typical people do," wrote Lowry in the letter, reported CNN. The 20-year-old said he had his unique way of learning things. "I would need a mentor to teach me, but I learn quickly, once you explain it, I get it. I promise that if you hire me and teach me, you'll be glad that you did. I will show up every day, do what you tell me to do, and work really hard," wrote Lowry. He wrote about his gift of mathematics and his sense of humor in the letter. The 20-year-old who hails from Leesburg, Virginia, has been flooded with various opportunities.

Ryan Lowry is a #gifted, 20-year-old with an #excellentmemory & #retentionskills. Ryan recently posted a letter to #LinkedIn to his “future employer” on how he would #appreciate his #autism to be seen and heard in the workplace. https://t.co/JUbhs4G69M pic.twitter.com/bjYOXJKdgY

The letter was posted on the job site and was captioned: Please see my letter to future employers. He is set to complete a post-graduate high school program for special needs children and currently works at SimplyBe, a coffee shop. He is set to end his time there once he graduates. Initially, he had planned to type out the letter but his father suggested another idea. "He was going to do it on his computer and his younger brother thought, 'Why don't you write it?" said Ryan's father, Rob Lowry.

He had considered mailing to letter to prospective employers but then decided to post it on his LinkedIn page. The post has gone viral since, and has garnered thousands of comments and reactions including job offers, said his father. Lowry is leaning towards is an offer from Exceptional Minds for a three-year program designed to teach autistic people with autism about animation. He is now busy preparing his resume and portfolio after the response he's received. He's excited about his next career opportunity, said his mother, Tracy Lowry. "I'm in awe and never thought this would happen over one written letter," said Tracy Lowry. "I'm overwhelmed with joy for Ryan and for it opening a whole topic of conversation among employers to helping ... people other than Ryan."

Lowry also received a host of positive comments on his post. LinkedIn user, Tyler Cameron, pointed out that employers didn't do enough to provide opportunities to those on the spectrum. "The unemployment rate for people with autism is upwards of 85 percent. The reason is simple — they have the skills to do the jobs, but employers screen them out, either with "personality tests", which have a heavy preference to neurotypicals, or with BS interview practices (surprise panel interview, ridiculous questions like "how many jelly beans can you fit inside of a 747"). As a sperg, I get an overwhelming sense of "we don't want you here" at almost any interview I go to," commented Cameron. Another user, Jim Lambert praised him for his attitude and approach. "Ryan, Every person on LinkedIn has been hired by at least one person that took a chance on him or her. I love your letter, attitude and self-awareness. Your experiences and talents will make you uniquely qualified for the right opportunity," wrote Jim Lambert.