The heartwrenching incident involving Ally Rednour unfolded back on May 15, 2015, in Louisville, Kentucky. 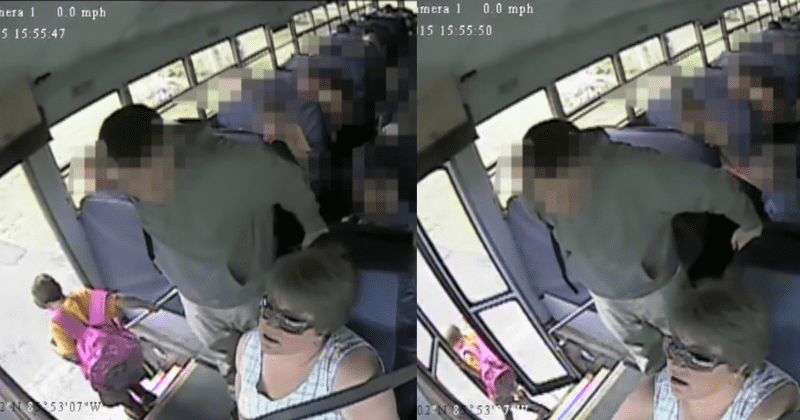 Disturbing footage shows the moment when a 6-year-old child was dragged for 1000 feet along the road by a school bus after her backpack was caught in its doors. The heartwrenching incident involving Ally Rednour unfolded back on May 15, 2015, in Louisville, Kentucky. Rednour, who was a first-grade student at the time, suffered severe abrasions to 12 percent of her body after driver Melinda Sanders drove off without noticing that the girl's bag was jammed between the doors. A surveillance camera inside the bus captured the painful moment as the child was being dragged along the bus for several blocks.

According to Daily Mail, Rednour was forced to undergo many surgeries as a result. As for Sanders, a civil trial against her and Jefferson County Public Schools has begun in Jefferson County Court. It comes after the girl's mother filed a lawsuit in 2018 seeking unspecified damages. The footage, which was obtained by WAVE3, shows Sanders looking in front and not towards the door as the child walks down the steps of the bus. The double door closes as the child is on the bottom step and hits her arm before trapping her backpack between it.

"Former Louisville, Kentucky school bus driver Melinda Sanders is facing a lawsuit after a video showed her dragging a 6-year-old girl who got stuck in the doors of the bus...She continued to drive for at least 1,000 feet before she noticed and stopped."https://t.co/lg7xx81MBl

Rednour can be seen looking back at her pink bag when the door slightly opens and closes shut before she can escape it. Unaware of this, the driver speeds away almost immediately without ensuring that Rednour has safely deboarded the bus. The child is seen desperately trying to keep up with the bus as she runs sideways but soon the vehicle gains too much speed and ends up dragging her along. During this time, another student is seen standing near Sanders as she chats and momentarily shouts at some of the students.

The lawyer representing the child's family revealed that she was dragged for 1,147 feet before a car honked at Sanders to stop the vehicle. At this point, the driver notices the child and immediately apples her brakes. "Oh my God, Oh my God," she exclaims before opening the doors and rushing to help the girl. But attorneys claim that Sanders had broken 16 rules of being a bus driver, which included ensuring every child's safety as they are getting on and off the bus. Not only did she fail to make sure that Ally had disembarked the vehicle safely, but also ran a stop sign and allowed a student to stand while she was driving.

According to WPSD Local, Sanders took the stand and expressed her regret for the unfortunate event. When asked what "loading and unloading" children to the bus meant to her, she said, "It means a lot to me, and I wish, Mr. Paulus, that I had followed that, that day. I can't take that day back." But many employees with the district's Department of Transportation (current and former) testified that Sanders had indeed broken protocol that fateful day. Describing the incident as "horrible," JCPS school bus driver and trainer Katrina Ferral noted, "I think it's horrible. You watch them get off the bus, you close the door. When they're away from the bus, close the door, you look in that mirror and you watch them."

"They have to be 10 feet away before you pull off," added Ferral. Sanders was fired from the district a month after the incident for not following procedure and ignoring training. Even the girl's pediatric surgeon Dr. Sheldon Bond revealed the level of damage that Rednour had suffered due to the carelessness. "We had some skin loss here and some skin loss there [points to each leg]. This was a very big abrasion which was scrubbed," said Dr. Bond. The suit noted that the child had also experienced PTSD and severe nerve damage for which she had to undergo several surgeries.