10 Easy Psychological Tricks To Get People To Like You Immediately

These tips can help you improve your social wellbeing as well as improve the current relationships in your life. 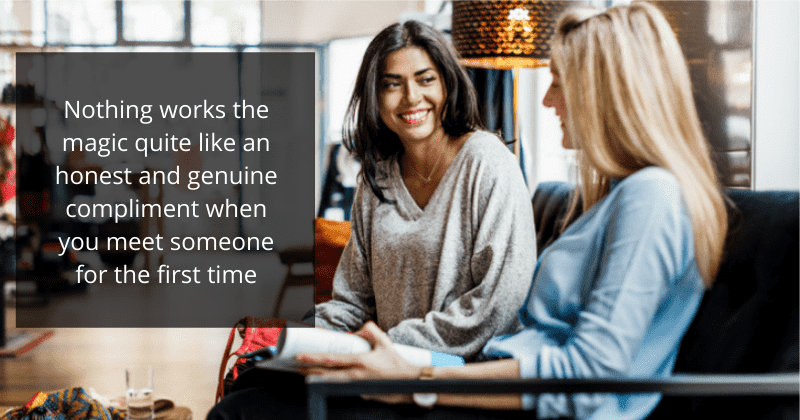 Very few things in life come naturally. More often than not, you will need to make a lot of effort to sustain what you have. Building friendships and maintaining them is no different. Unless you put in the right amount of effort, whether it is by regularly keeping in touch or meeting them often, you will most definitely see the connection erode slowly. Another aspect worth noting is that not everybody is a natural at befriending people as some aren't quite aware just how they can go about building that bond. Well, if you're one of those, fret not, we bring you to ten of the most important psychological tricks to make people like you instantly, courtesy of IFLScience.

Nothing works the magic quite like an honest and genuine compliment. When you compliment people they tend to associate the adjectives you use to describe them with yourself. This phenomenon is called Spontaneous Trait Transference with plenty of studies proving just how helpful it is. As per an American Psychological Association study, the effects occurred even when the implied traits were not indicative of the participants' prior knowledge about the person.

2. Always Be In A Good Mood

As they say, a good mood is always contagious. In psychology, this occurrence is called Emotional Contagion wherein people are strongly influenced by the moods of other people. This is rooted in studies too with a University of Ohio study which suggests people unconsciously feel the emotions of others around them.

3. Become Friends With Your Friend's Friends

Social networking sites didn't become a big deal by chance. They basically brought you close to your friend's friends and built an entire network around it. This theory is called the Triadic closure, wherein two people are likely to get closer if they have a common friend. As per the University of British Columbia study, two people were likely to connect on Facebook if they had a mutual friend.

4. Be Good And Competent

Can I respect this person? Can I trust this person? These are the two main questions people ask of themselves when they meet someone new. These traits are called Competence and Warmth, according to Harvard professor Amy Cuddy and people tend to either categorize you into one of these criteria once they make their judgment. Ideally, it's great to be a bit of both.

5. Show The Chinks In Your Armor

It's never good to be the Macho all the time and in fact, it can be counterproductive when it comes to building friendships. Make sure to show you have chinks in your armor by letting your guard down once in a while to help them know you are genuine and not an emotionally-stunted robot.

While it works well when you compliment people. Overdoing it can saturate their brain which in turn can desensitize themselves from feeling something genuine when you actually give them a compliment. So, make sure to not overdo it and instead set it aside for occasions.

A smile is often the first icebreaker between two strangers which can often lead to conversations and subsequently friendships. Also, it only takes ten muscles to smile so be sure to use this weapon to your advantage.

The best way to get close to people is to find a common ground. Whether it is your love for pets, a favorite sport, or your general feelings about life, make sure to connect on those points to make quick connections. This is called Similarity-Attraction Effect which suggests that people often like others who are similar to themselves.

Breaking the physical barrier is essential when it comes to making friends. This means casually touching them in the arm or shoulder such that they barely notice. This phenomenon is called Subliminal Touching which allows you to get closer to them by building a sense of proximity with them. We don't mean you have to go full Joe Biden on them and rub their back or throw in a hair sniff too but keep it to a minimum.

People treat others in ways consistent with their expectations of them which means others behave in a way that confirms those expectations. According to Cuddy, "If you think someone's a jerk, you'll behave toward them in a way that elicits jerky behaviors." On the other hand, if you want people to be good with you, people are more likely to be friendly to you.

Bottom line, inculcating these simple changes to your everyday interactions can not only increase your social well-being but also improve your current relationships.